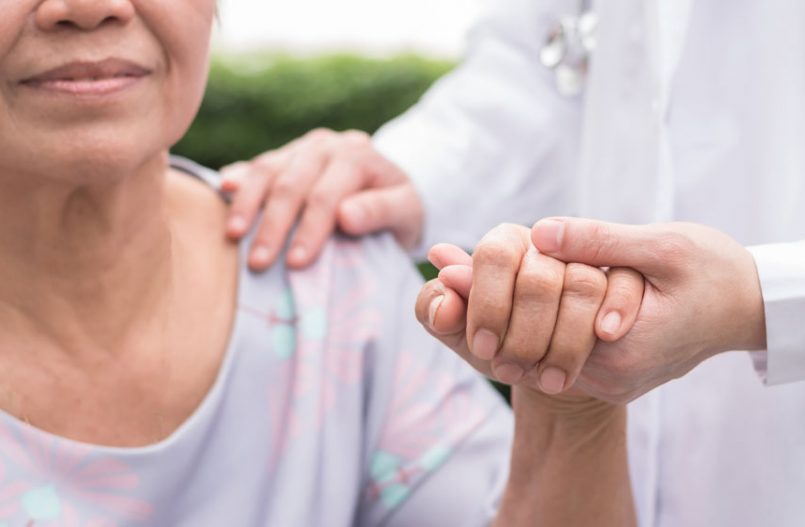 “It feels good to be a pioneer – once again,” says Dr. John Rugge, the founder of Hudson Headwaters Health Network.

Rugge and the network’s CEO, Dr. Tucker Slingerland, are in mid-conversation over lunch at the Merrill Magee Inn, telling board members and friends of the Hudson Headwaters Health Foundation -the not-for-profit, fundraising arm of the network – about new initiatives in palliative and hospice care.

“We’re looking at very complicated, very hard to manage chronic conditions; commonly, they can be medically treated but not cured. We can, however, make those symptoms less bothersome and enable our patients to get more out of the days they have,” explained Dr. Slingerland.

“Hospice care is for that time of life when someone has decided not to accept aggressive care. We then focus on keeping the patient comfortable. Palliative care is not necessarily for the dying but for those coping with a really difficult illness,” said Dr. Rugge. “Sometimes the side effects of treatment can be as painful as the disease itself.”

Hudson Headwaters Health Network’s programs in this increasingly-specialized field are expanding in many directions at once.

Hudson Headwaters has provided palliative care services to patients who have been hospitalized with chronic medical conditions or a terminal illness, or who suffer from the symptoms of a disease and its treatment, since 2014.

Now all patients in Glens Falls Hospital, not just those admitted by Hudson Headwaters physicians, will have access to those services.

And starting this week, the Network’s outpatient palliative care services, which until now have been concentrated in its West Mountain health center, will expand to Warrensburg.

Those same services, which include counseling, are also available at several local nursing homes.

“You can’t practice medicine in the Adirondacks without knowing what people need. They’ll tell us. They come to us. It’s then up to us to find ways to deliver services that meet those needs,” said Dr. Rugge.

Rugge continued, “We’re expanding in this area because the need is there. Cancer specialists tend to be attuned to whatever the next step in treatments or therapies may be, but that may lead them to neglect other needs.”

According to Jessica Rubin, the Hudson Headwaters Health Foundation’s executive director, the Network has created a multi-tiered team specializing in palliative care.

That team may expand to include social workers and a chaplain.

It has also sent providers to the University of Vermont Medical Center, a national leader in pallitive care, for additional training,

Later this month, thanks to a grant from the foundation, UVM will send experts to Silver Bay YMCA to instruct Hudson Headwaters Health Network providers in the difficult art of discussing what are called, somewhat euphemistically, “end of life choices,” with their patients.

Hudson Headwaters may also create a fellowship program that will send physicians to UVM for a year’s residency to become even more expert in delivering palliative care.

These, she said, are just a few component parts of what is a new (or perhaps renewed) emphasis on palliative and hospice care.

The current formula whereby providers are reimbursed for their work – the so-called fee for services model – does not adequately compensate practioners for the hours spent with patients suffering from chronic illnesses and with their families, for the phone sessions and house calls, said Rugge.

Instead, it rewards practioners for technology-based procedures or billable encounters, “over-doing some things, under-doing others,” as Rugge puts it.

“We’d like to see funding based on outcomes. That would support services that allow people stay in their own homes, rather than in hospitals for weeks and months at a time. It’s not only less expensive; it’s more effective,” said Rugge.

The absence of funding is one reason why palliative care has lagged behind more lucrative services, said Slingerland.

“No one, not physicians in private practice, not the hospitals, makes money doing this,” said Slingerland. “But it’s the right thing to do. We hope that as society comes to value this type of medicine, a reimbursement system that supports it will be adopted.”

“Because we’re meeting a need, we’ll find a way to sustain these programs, perhaps with some financial help from foundations,” said Dr. Rugge.

Jim Himoff, who owns a childrens’ camp on Brant Lake and who serves as the president of the Hudson Headwaters Health Foundation, sees positive, perhaps unexpected consequences for Adirondack communities in the Newrwork’s embrace of palliative care.

“I don’t see a better engine for economic sustainability,” said Himoff. “If we’re treating patients within the Adirondack Park, we’re creating opportunities for training programs and jobs for technicians. We’re impacting poverty as well as population and job losses in the Adirondacks.”

This additional dimension of providing palliative care could in itself attract funding from foundations, said Himoff.

The Art of Medicine

According to John Rugge, Hudson Headwaters’ palliative care services can be traced to the origins of community health care centers and the commitment to treating the whole person, not just the illness from which the person happens to be suffering.

It builds upon programs such as Homeward Bound, which began as a pilot project funded by the Glens Falls Foundation to see and treat patients in their homes.

“Keeping people in a hospital is not necessarily the most humane way to treat them,” said Tucker Slingerland.

It acknowledges that such services are necessarily a part of health care.

“Wherever people live, some are being born, some are dying,” said Slingerland.

“More than a new type of medicine, palliative care is a return to medicine as an art,” said Rugge. “The Adirondacks can be its laboratory. If we’re successful, we can boast about it. If we fail, everyone can learn from us.”

According to Rugge and Slingerland, hospice care, like palliative care, is under-funded by society and under-utilized by local hospitals.

“We have way too many people at the end of their lives who should be in a home setting, getting the care that enables them to make the most of the days they have, even as they scale back on medical care,” said Slingerland. “It will take some creative problem-solving to arrive at a solution.”

One such creative solution might be the construction of a free-standing, hospice care facility for those at the end of life who lack an appropriate hime or family to help care for them.

“It would be a big undertaking, but it’s something we should take a hard look at. Hudson Headwaters should take the lead here too. It’s work well worth doing,” said Tucker Slingerland.