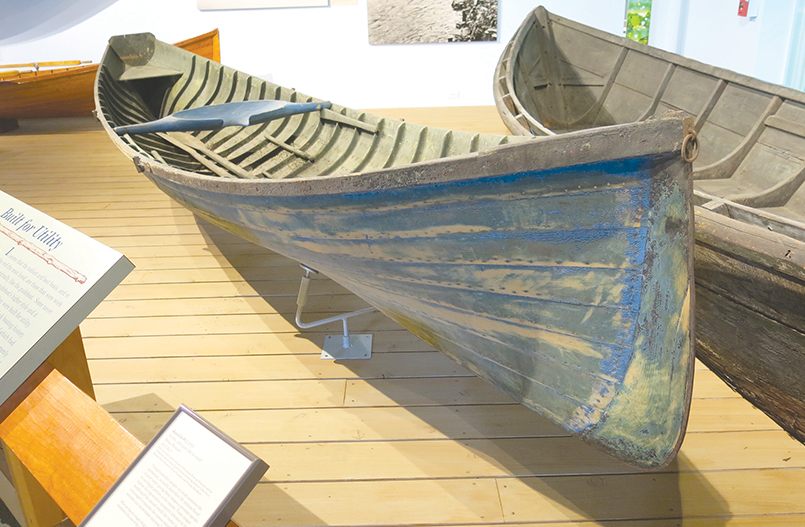 Lurking in the barns and boathouses around this region are some very special boats. Last fall, Bernard W. Brock of Lake George donated one of these boats to the Adirondack Experience, the Museum at Blue Mountain Lake. The boat is on display in the boat wing of the museum this summer.

The boat is an unusual one for Lake George. It is an Adirondack Guideboat, a type developed not for a large body of water like Lake George, but rather to navigate the carries between and passages over disconnected lakes elsewhere in the Adirondacks.

This guideboat is square sterned; meaning it features a wineglass transom, carved from a single spruce knee. This feature is generally associated with the early, proto-guideboats of the 1860s and 70s. We see boats with a transom like this in the photos and sketches of Seneca Ray Stoddard, but few remain today. One former curator of the Adirondack Museum told me that in 40 years of studying these boats, he had come across only 6 square stern boats.

From the Deep Woods to Lake George

George W. Tupper, great grandfather of the donor, brought the boat to Lake George. His grandfather was an early Adirondack surveyor, who drowned while surveying the lake, and the town, that was later named for him.

It’s tempting to think that George W. Tupper commissioned this boat from a builder in the northern part of the Adirondacks. Imagine him buying this boat as a young guide in the 1860s, and then, 20 or so years later, getting wind of a good opportunity in Hague, and loading his gear, and rowing—and portaging–this very boat down to Lake George. There, he worked for the Island Harbor House, supplying the kitchen with fresh-caught fish served every day.

The Adirondack Guideboat was developed to be light enough to carry on portages between lakes, yet strong and burdensome enough for a guide to row a sport—his client—and their gear into the woods to the good hunting and fishing grounds.

These boats are significant cultural artifacts of this region, and the type is known to marine cognoscenti around the world. The construction, and the form of these boats, was influenced by European, colonial era boat types, but local builders developed the Adirondack Guideboat into a refined and well-adapted machine for its use in this region. The builders used local lumbers to create a very lightweight hull—55 pounds for a 15’ boat, including oars and seats—but also a very strong boat. There are many guideboats in use today that are over 100 years old.

The details of the boats varied from builder to builder, and from region to region, but the essential construction was the same throughout: the frames, or ribs, and the ends of the boat were sawn from spruce knees, selected for grain that followed the curvature of the hull, and the planking was a smooth-skin lapstrake, unlike the clapboard appearance of the more familiar lapstrake method.

While it was originally a workboat, a guideboat was not crudely knocked together.  Each part of the hull is a lightweight and delicate piece, but through careful fitting and fastening, the sum of the parts is an integral, strong form. There is no caulking in these boats; it’s wood-to-wood fitting that keeps the water out.

Rather than stamp the boats with their name, or hang a brass plaque, the builders instead fashioned elements of the boats in their own individual manner: How the seats were made, how the stem heads protruded through the decks, or how the frames were shaped, served to identify the craftsman.

Recently, the Adirondack Experience published a book that is a significant tool to help identify the builders of guideboats. However, after studying this book, and after several acknowledged experts studied this boat, we’re still unsure who built this boat.

Perhaps the boat was a fancy version, not built for a guide but rather something more suitable for a gentleman on holiday to row lightly while a lady sat in the stern, in fine dress and hat, parasol in hand. The decks are detailed with florid scalloping in the deck cap. It also had floorboards, and no guide would have suffered that extra weight on a long carry.  There is a hole in the foredeck, which in some boats could hold a torch for jacking deer along the shore, but this one may have held a bow pole and pennant. Perhaps that square transom was meant to make the boat look more like a contemporary rowboat, like a whitehall, or Lake George rowboat.

Thanks to the generosity of Bernard W. Brock, this boat now lives in one of the largest collections of freshwater boats in the world, at the Adirondack Experience. There, the boat can be studied in the context of dozens of other Adirondack Guideboats, and perhaps a future researcher can put together the details of this boat and find its proper place in the history of the Adirondacks.

And, this summer, you can go see it on display at the Museum.

Reuben Smith is a founder and owner of Reuben Smith’s Tumblehome Boatshop in Warrensburg.