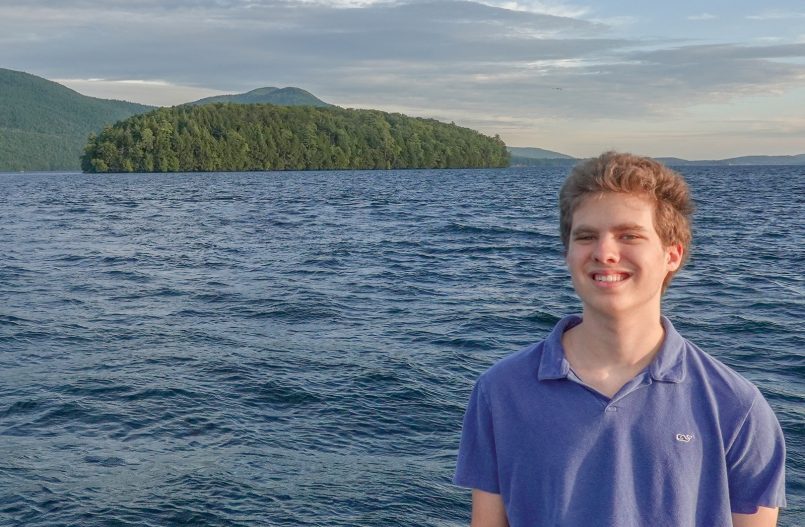 Dome Island is that rarest of things, an undisturbed piece of wilderness in the middle of Lake George.

Noah Chirnomas, an 18-year-old New Jersey resident who graduated from high school earlier this year, is among the hundreds of thousands who have found themselves intrigued by its remote beauty.

“I first saw Dome Island as a young boy and

I was immediately captivated by it,” says Chirnomas. “I quickly learned that I was not allowed on the island and I started asking myself, ‘Why can’t I go there? Who owns it? How is it still untouched?”

His search for answers to those and other questions about the island – its history, environmental, political and commercial – has produced the single best volume yet on the eight-acre island: “Dome Island: Forever Wild.”

Chirnomas will sell and sign copies of the book on August 6 from 11 am to 1 pm at the entrance of the Bolton Historical Museum in Rogers Park, Bolton Landing.

Pioneering Lake George conservationist John Apperson knew how rare Dome Island was by 1939, when he purchased the island for $4,500, making use of a generous loan from Dr. Irving Langmuir.

“Apperson’s sole purpose in buying the island was to ensure its preservation and prevent houses and hotels from being there,” said Chirnomas. “if he had not done that, Dome Island would, in all likelihood, have been spoiled by homes or hotels.”

Chirnomas said he wrote the book “to give people a chance to learn about Dome Island and how it came to be preserved. I’m sure many pass it without knowing the fascinating story of why it’s here for us to view and enjoy.”

In 1956, Apperson donated the island to The Nature Conservancy.

The creation of an endowment large enough to maintain and preserve Dome Island was a condition that Apperson attached to his offer to donate  it to the Nature Conservancy.

The campaign was successful, and the money that Langmuir raised was the basis of a trust fund that is still used to maintain the island in its natural state.

At Apperson’s suggestion, a committee was established to help make certain that Dome Island is preserved, as the plaque on the island reads, “for the visual enjoyment of the public and as an example of uninterrupted natural processes.”

Chirnomas says he came across a statement by Apperson that helps explain why the conservationist wished to place the island off limits to the public: “It’s like seeing a beautiful work of art in a gallery. It is there for the pleasure of the people. We are invited to look but asked not to touch.”

Chirnomas was led to the biographies of Apperson, Langmuir and the larger cohort of conservationists as he pursued answers to his questions about Dome Island’s history.

Among his best sources of information was the Adirondack Research Library at Union College’s Kelly Adirondack Center, which is located in the Niskayuna home of the late conservationist Paul Schaefer, a disciple of Apperson’s.

“All of a sudden I had access to Apperson’s photographs, letters, and other documentary materials and the project came to life,” said Chirnomas.

Using the materials at hand, Chirnomas did his best to trace the chain of ownership from 1855, when New York State sold it to private individuals, through Pliny Sexton, the Horicon Realty Company and other parties to 1939, the year Apperson purchased it.

Chirnomas acknowledges that “the history is a little unclear.”

He can therefore be forgiven for omitting something I learned just last week, thanks to a 1934 Post-Star clipping sent to me by Lynn O. Wilson of Pilot Knob.

According to the article, Albert G. Robinson, Wilson’s grandfather, purchased Dome Island that year at a Warren County tax sale from the Horicon Realty Company for $187.61 – the amount in taxes owed.

His ownership must have been a brief one, since by 1936, it was owned by Katherine McCaddon, from whom Apperson purchased the island.

Long before Apperson purchased the island, he was working to protect its shores from erosion by rip rapping the water line, a practice that continues to this day through the efforts of the Dome Island Preserve Committee.

As Chirnomas notes, Apperson also employed imaginative tactics to ensure that the island would be seen but not touched: planting poison ivy at its most accessible points and persuading people that it was rattlesnake habitat.