“New York’s officials are really searching for answers to these problems, so they’re anxious to see what’s out there.” That’s why New York State is interested in our project” – Bolton Supervisor Ron Conover. 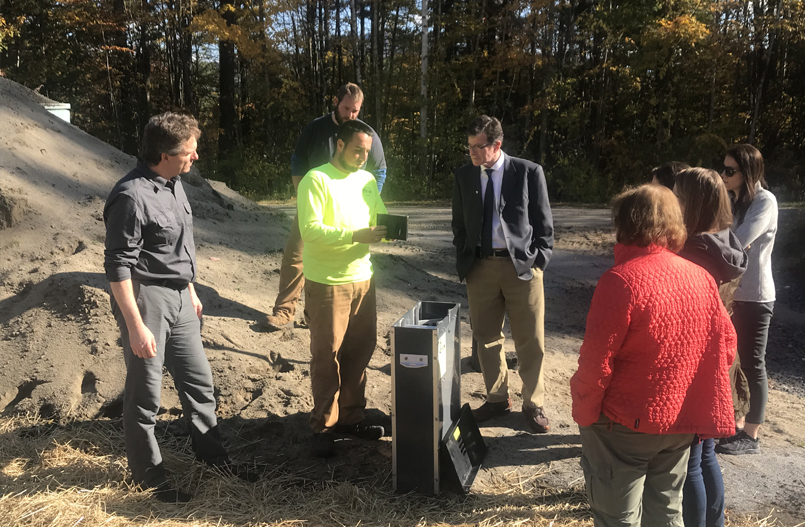 Members of the Assembly Minority Task Force on Water Quality, who held a forum in Lake George on October 29, also expressed interest in the new system.

In fact, Assemblyman Dan Stec, a member of the panel, told Bolton Supervisor Ron Conover that he was anxious to see it for himself.

And on November 6, Lake George Waterkeeper Chris Navitsky and plant operator Matt Coon presented the system to a meeting of the Lake Champlain Basin Program in Vermont.

One year ago, in October 2018, Bolton turned  one of the plant’s sandbeds into a “wood chip bioreactor” –  trenches filled with high grade woodchips. The chips absorb effluent, consuming and removing nitrogen from the wastewater.

The only municipal system of its kind

Bolton’s  is the only municipal wastewater treatment plant in the country using the system and it is proving remarkably successful, extracting as much as 70% of the nitrogen remaining in the wastewater treated by the plant.

“Older plants in rural communities such as Bolton can be retrofitted with this kind of technology, saving taxpayers millions of dollars in upgrades,” said Chris Navitsky.

According to Eric Siy,  executive director of The Fund for Lake George, the denitrification of wastewater is a priority if Lake George is to be protected from pollutants entering groundwater, streams and ultimately Lake George itself.

“Nitrates are increasingly seen as a major contributor to Harmful Algal Blooms,  so reducing nitrates is a matter of huge concern to municipalities, state agencies and environmental organizations. A simple but effective technology such as a woodchip bioreactor can be of enormous benefit to Lake George and freshwater bodies everywhere,” said Siy.

“Thanks to a 2017 watershed-wide assessment in Bolton by Chris Navitsky and Dr. Jim Sutherland, which studied not only the plant itself, but the streams, seeps, septic systems and groundwater infiltrations that may be carrying pollutants to Dula Pond, Mohican Point and ultimately Lake George, we knew there was an issue with nitrates and we believed this technology was key to solving that problem,” Siy said.

“Given what we knew of the technology, this investment was a no brainer. And while not huge, it’s an investment that could have an enormous pay-out in the form of water quality protection.” Siy added.

“Currently, filtering effluent through wood chips is a denitrification method commonly used only by midwestern farmers to clarify agricultural runoff. And there are controlled experiments in laboratories at Stony Brook University on Long Island. We wanted to see if a woodchip bioreactor could work in a municipal system,” said Navitsky.

Should DEC grant the town authorization, Bolton will expand the pilot project to include more sand beds, enabling to treat even more wastewater.

In all likelihood, the expansion will be funded by a $1 million state grant awarded Bolton earlier this year to help prevent Harmful Algal Blooms from developing in Lake George.

Eric Siy gives Bolton Supervisor Ron Conover the most credit for the project.

“Supervisor Conover really demonstrated bold leadership, supporting the concept and leading the effort to put it into practice for the first time ever, at least on this scale,” said Siy.

Conover, on the other hand, credits Kathy Suozzo, the environmental engineer retained by the town to recommend measures to improve the plant’s  efficiency and monitor its operations, with bringing the idea to the attention of the Town Board.

She noted that as originally constructed, the plant “lacked the ability to denitrify,” or remove nitrogen from effluent.

Suozzo prepared an engineering proposal for the DEC, which approved the project in July, 2018. The woodchip bioreactor went on line October 10, 2018 and has been operating continuously since then. According to Chris Navitsky, (who, along with Jim Sutherland, has been awarded a two-year grant to evaluate the effectiveness of the woodchip bioreactor system ) its performance has exceeded expectations.

“The results let Supervisor Conover know that this thing is working and perhaps encouraged him to invite Assistant Commissioner Tierney to conduct a fact-finding visit to the plant,” said Navitsky.

Tierney brought with him officials from the Southern the upper Chesapeake Bay watershed and Long Island, where pollution from nitrogen is an especially grave problem.

“New York’s officials are really searching for answers to these problems, so they’re anxious to see what’s out there.” That’s why New York State is interested in our project,” said  Ron Conover.

According to Navitsky, the visit went as well as  town officials could wish.

“Plant operator Matt Coon explained the process to Jim Tierney very well; he was very interested  in the system not only because it’s working but because it’s sustainable. It’s gravity-fed so it doesn’t use a lot of energy,”  said Navitsky.

One product of the visit was a decision by DEC officials to create working groups that would include representatives from Stony Brook University, Lake George and other parts of the state to exchange data and technology related to woodchip bioreactors.

Navitsky said he would like Bolton’s wastewater treatment plant to become an educational destination for elected officials, engineers and plant operators – everyone interested in protecting lakes from wastewater pollution.

“I would absolutely support that,” said Ron Conover. “We went forward with this project to help Bolton and protect Lake George. But we also did it to demonstrate its effectiveness for other communities. We’re happy to share what we have.”