An Unseen Side of The Hyde: The Statuary Groups of John Rogers 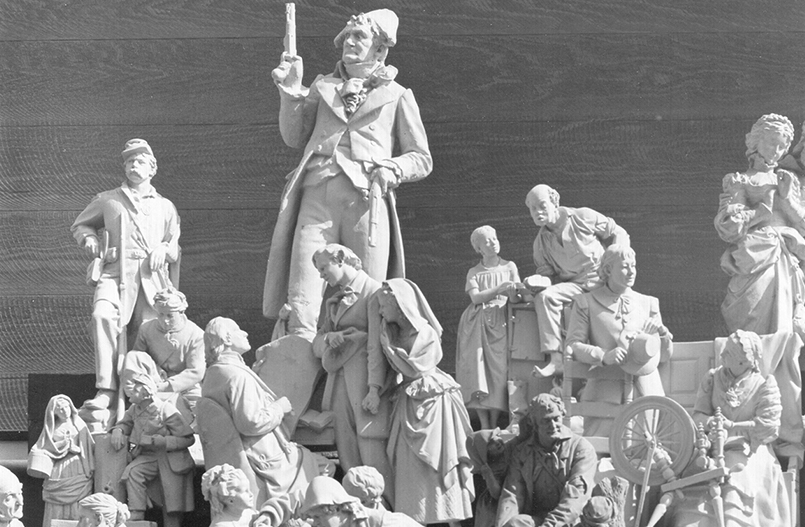 The Hyde Collection happens to own one of the world’s largest collections of mass-produced plaster statues by John Rogers (1829-1904).

The most popular American sculptor of the 19th century, Rogers sold an estimated 80,000 plasters, known as “Rogers Groups,” to middle-class Americans during the course of his career, which lasted between 1860 and 1893.

According to Hyde curator Jonathan Canning, the museum owns 81 pieces. They were exhibited twice, in 1974 and 1994.

Charles R. Wood, the founder of StoryTown and Gaslight Village, donated the statues to The Hyde.

Wood displayed them at Gaslight Village in the 1960s.

“I’m rather taken by the whole collection,” said Canning. “A number depict scenes from Shakespeare and others deal with historical and societal events.”

Canning added, “One thing I like about our collection is that we have a number of different versions of the same piece. Rogers could change elements, such as the arrangement of limbs, or alter minor details.”

Canning said the collection has been exhibited twice, in 1972 and 1994.

Because of the condition of many of the pieces, he thought it unlikely that they would ever be exhibited again.

“Few are in a presentable condition,” he said. “The majority are either chipped or covered in a discoloring glaze or shellac.”

Nevertheless, Canning said he would not recommend de-accessioning any of the statues.

“There is a value to having such a large number of them,” he said.

Out of critical favor for much of the 20th century, an exhibition of Rogers’ work at the New-York Historical Society in 2012 sparked a revival of interest in the artist.

According to a 2012 press release from the New-York Historical Society, “More than any other artist of his day, Rogers reached Americans en masse, and his new democratic art form addressed the issues that shaped their lives and defined the American experience.”

“Rogers wanted to make his sculptures affordable for a broad audience,” the press release continued.  “He advertised widely, established a factory for large-scale production, and shipped his plasters across the country at a time when the average American had little access to original works of art.”

Rogers was born in Salem, Massachusetts. As a young man, he trained to be a machinist and worked in several factories. He spent his spare time modeling figures from clay and in 1858 decided to travel to Europe to train to be a sculptor. He quickly realized that realistic approach to sculpture did not conform to the neoclassical style practiced in Rome and Paris at the time, and he soon returned to America. He exhibited his sculptures in shop windows and charity fairs, taking orders for copies. His small groups sold for around fifteen dollars apiece.

Because Rogers addressed issues such as war, slavery and racism, his statues retain a topical appeal, said Canning.

In 2021, for instance, Canning displayed the 1866 Uncle Ned’s School, which placed the education of newly emancipated slaves in the forefront of Americans’ minds.

Canning said he chose to display “Uncle Ned’s School” in 2021 to commemorate the recognition of the Juneteenth holiday by the federal and state governments.