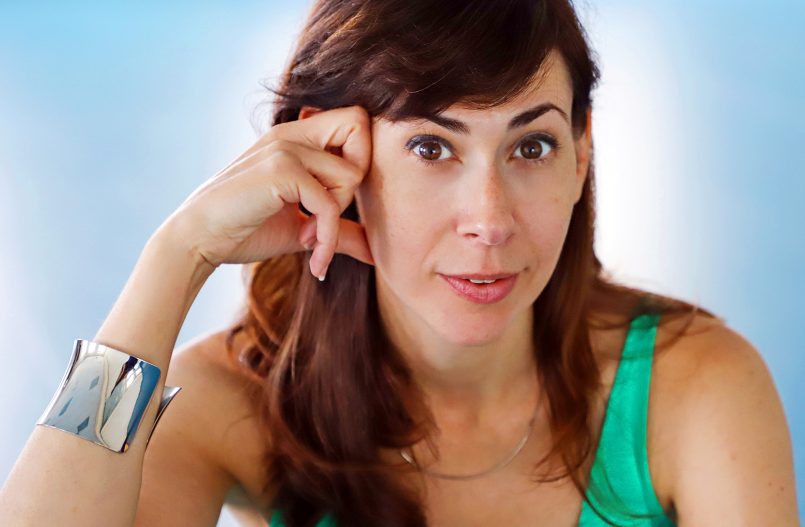 Its evocative place-based name notwithstanding, there is nothing narrowly regional – that is, parochial –  about the Adirondack Theatre Festival.

“The Adirondack Theatre Festival has a history, not only of participating in national conversations, but of leading them,” says Miriam Weisfeld, ATF’s new Producing Artistic Director.

“Founders Martha Banta and David Turner nurtured incredibly important writers in the early stages of their careers; Mark Fleischer developed work that went on to Broadway,” she continued

Weisfeld is uniquely positioned to  sharpen the organization’s national perspective,  to broaden it, even.

A high school actor recruited by York University in Toroto, Weisfeld discovered her calling as a dramaturg – “a facilitator in the creation of new work” – as an undergraduate.

From Toronto, Weisfeld went to Cambridge, MA, where she entered Harvard University’s A.R.T./MXAT Institute ,  earning an MFA in Dramaturgy.

Created by Robert Brustein, the legendary dean of the Yale Drama School and the founder of the American Repertory Theater at Harvard, the Institute offered  Weisfeld the opportunity to study at both Harvard and the Moscow Art Theatre.

In Russia, she learned to appreciate  “what it is to make new work in a place where free speech is not a given.”

“There’s a civic dimension to theater, that is, a relationship between our ability to experience dialogue and our education in citizenship,” Weisfeld said.

“What keeps me going as a theater practitioner, what keeps me committed to doing this very difficult thing,  is the relationship that our drama has with democracy.” said Weisfeld.

As associate artistic director of Woolly Mammoth Theatre in Washington DC,  Weisfeld had  “the extraordinary opportunity to produce work at the foot of the National Mall, work that would be seen by Supreme Court justices, among others, who would participate in discussions afterwards,” she said

She also hatched a conference there on theatre and democracy, which led to thecreation of a nationally- recognized community engagement program.

The Adirondack Theatre Festival has the same opportunity to engage in civic-building, democratic dialogue, she continued.

“We are committed to deepening the impact of our work, to widening and diversifying the circle of voices we present,” she said. “The audience is here. The opportunity is here. The need is here.”

However global Weisfeld’s perspective may be, it does not exclude the local; indeed, it was Lake George that helped lure Weisfeld east from Minneapolis, where she was  Director of Artistic Development for the Children’s Theatre Company.

“I have a genuine interest in this  community and this audience because I benefited as an artist from being here,” she said.

“The environment was inspiring,” said Weisfeld.  “Our time at Lake George was instrumental in making the play  one of the most successful in Woolly  Mammoth’s history.”

Another Wooly Mammoth play developed at Lake George was nominated for a Tony award.

“Year after year, it was consistently impressive,  what the environment and the audience did for the artists, inspiring us while nourishing the conversation and the process,” said Weisfeld.

Weisfeld said she looks forward to continuing to work with the sort of audiences she met on Lake George,  “strengthening the muscles of empathy and analysis.”

She also looks forward to a less-hectic life with her husband, Joe Isenberg, anaward-winning fight director and actor who will commute to New York for work, and their young daughter, who is now enrolled in school here.

“We feel like we’re coming home, and at the same time, we feel we’re at thestart of a new adventure,” said Weisfeld.