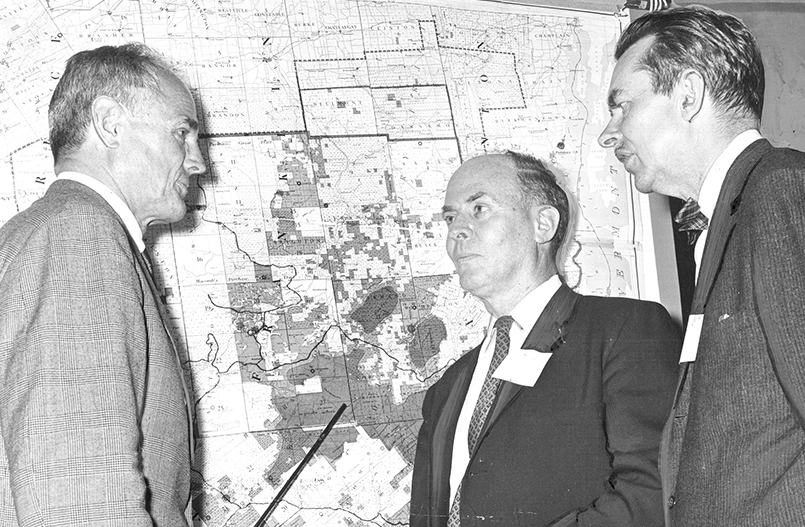 Assemblyman R. Watson Pomeroy (left) explains a map of the Forest Preserve with some sections classified as wilderness to ADK leaders at an ADK meeting in Albany in May, 1961.
By Anthony F. Hall

Best known for promoting the recreational use of the Adirondack Forest Preserve, the Adirondack Mountain Club (ADK) has also been, at times at least, an influential advocate for preserving portions of the Adirondacks as wilderness, from which all traces of man have been erased.

That aspect of ADK’s advocacy was, to some extent, recognized in the 100th anniversary commemorations of the organization’s founding in 1922.

ADK’s stewardship is on display at The Adirondack History Museum which has mounted an exhibit about the Club’s history.

(Presumably, the antisemitism of ADK members, which blocked the renaming of Mount Dix in Bob Marshall’s honor in 1928, has been omitted.)

And in a joint resolution sponsored by Senator Dan Stec and Assemblyman Matt Simpson, the New York State legislature acknowledged that ADK “teaches people how to explore and protect New York’s public lands and waters” through educational outreach, stewardship programs, and trail work.

But the resolution also recognized that the ADK works “to protect New York’s public lands and waters.” Or at least it had in the past.

In the late 1950s, ADK’s Conservation Committee supported the recommendations of the state’s Joint Legislative Committee on Natural Resources to preserve sections of the Adirondacks Forest Preserve as wilderness.

Indeed, according to Brad Edmondson’s “A Wild Idea: How the Environmental Movement Tamed the Adirondacks,” field trips organized by ADK helped persuade the Joint Committee’s new chairman, Assemblyman J. Watson Pomeroy, of the benefits of wilderness.

The chairman of ADK’s Conservation Committee, David L. Newhouse, believed that the greatest threat to wilderness lay in the aggrandizement of recreation – instigated by the Conservation Department and its successor, the Department of Environmental Conservation.

“The Department of Environmental Conservation,” he wrote in 1970 to David Sive, an old friend and the nation’s preeminent environmental attorney, “is constructing a definition of ‘forever wild’ in which there is little wildness and less wilderness.”

Not long after Newhouse wrote to Sive, he discovered the DEC had cut at least 125 trees deep within the Forest Preserve to create a snowmobile trail.

In Newhouse’s view, that action violated the rule that wild forest recreation is permitted (short of constitutional amendments) only if “no material degree of timber” is removed, as the Court of Appeals held in 1932.

Somehow, the original intent of the “Forever Wild” clause had to be reaffirmed and wildness restored to the Adirondack wilderness. In 1970, Newhouse believed the Temporary Study Commission on the Future of the Adirondacks was in the best position to do this.

“The Commission could accomplish this by re-enforcing the meaning of Forever Wild, using the words of Judge Harold J. Hinman,” wrote Newhouse.

(In 1932, Judge Hinman wrote “We must preserve the Adirondack Forest Preserve in its wild state, its trees, its rocks, its streams. It must always retain the character of wilderness.”)

When the Temporary Study Commission released its recommendations in January 1971, it did reaffirm the significance of wilderness and of the wilderness experience.

“No better method exists to assure continued resource protection than Article XIV,” the Commission stated. “In this age of environmental concern, what could be more appropriate than a reaffirmation of New York’s unparalleled conservation tradition?”

As George Davis, the staff member who would later win a MacArthur ‘genius’ grant for his work on behalf of environmental protection, wrote in an essay for Commission members: “as originally conceived… the Adirondack Park was a planned scheme to prevent the loss of some quality of wildness, a thing of big trees, bears, beavers, hermit thrushes and scarlet tanagers as opposed to slashings, lawns and English sparrows.”

When Newhouse wrote Sive in September, 1970, he was unaware the Commission was discussing a proposal to create a regional land use agency, one that would have authority not only over private lands but over the public, state-owned Forest Preserve as well.

That authority could, at least in theory, protect the Adirondack wilderness from the DEC’s goals and  policies far more effectively than an affirmation of the values of the Forever Wild clause.

It’s also unfortunate that ADK chose to side with the DEC in the 2013 case of “Protect the Adirondacks! Inc. vs. NYS Department of Environmental Conservation and Adirondack Park Agency.”

(Ostensibly, the constitutional question decided by the court was a narrow one: whether a proposed snowmobile trail through the Forest Preserve, which would have required the destruction of trees, violated Article XIV of the state Constitution. That clause famously states: “The lands of the state, now owned or hereafter acquired, constituting the Forest Preserve as now fixed by law, shall be forever kept as wild forest lands.”)

In defense of its support for the DEC, ADK stated that “The intent of the protected land was not to sequester it, but rather to preserve it for the people and the public’s enjoyment.”

This may have become ADK’s guiding philosophy over the past several decades, but as history shows, it was not always thus.