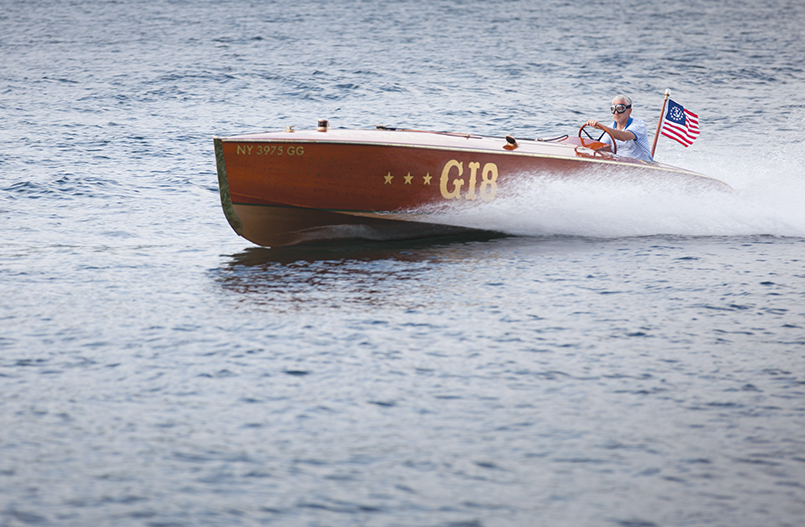 Matt Emmens' El Lagarto replica photographed by Kent O. Smith at the 2015 Gold Cup Festival in Bolton Landing. She was on display at the Lake George Rendezvous in Lake George on August 27.
By Anthony F. Hall

To commemorate the centenary, Lisa Reis, a granddaughter of George Reis, El Lagarto’s owner and driver, and Jon Bowers, grandson of racing mechanic Anderson Bowers, presented an intimate portrait of the boat and the men who raced her at the Pilot Knob Firehouse on August 27 at 7 pm.

Built in 1922 by John Hacker for the president of Packard’s engineering department, the 26’ boat was christened Miss Mary in 1923 and sold to George Reis in 1924.

Reis told Anderson Bowers that he would buy the boat only if he was convinced that it could beat Jonathan Moore’s Jolly Roger. He dispatched Bowers to Buffalo to inspect the boat and, if it met the criterion, purchase it for him.

The boat clocked close to fifty miles per hour and Bowers bought it for Reis, said Bowers.

She was brought to Lake George and christened El Lagarto in 1925.

Her 200-hp Peerless engine was replaced in 1928 with a 275-hp Packard Gold Cup engine, giving the boat enough power to compete with the best speedboats in the country, according to Hallie Bond, author of “Boats and Boating in the Adirondacks.”

That year, the two witnessed the victories of Hotsy Totsy, whose owner, Victor Kleisrath, had added steps to his boat’s hull.

It is commonly believed that these shingles helped make El Lagarto America’s fastest speedboat. Bowers, apparently, does not share that belief.

After El Lagarto won the Gold Cup races in 1934 – the same year she won her third President’s Cup – Lake George earned the right to host the races the following year.

El Lagarto won her third consecutive Gold Cup race in 1935. That autumn, Reis and Bowers took El Lagarto to Northwest Bay, where it was clocked at a top speed of 72.727 mph, breaking existing records.

According to Lamb, “Only two boats answered the starting gun. “El Lagarto went dead in the water after only one mile of competition and Impshi, with Englishman Kaye Don driving, ran 89 out of 90 miles by itself.”

Impshi’s 1936 victory returned the Gold Cup to the shelf of the Detroit Yacht Club.

El Lagarto was retired from competition in 1937 and was donated to the museum in Blue Mountain Lake in 1963, one year after Reis’ death in Glens Falls.

El Lagarto had a life beyond even that of a historical artifact, though; it became a source of inspiration for the wood speed boat revival in the 1960s and 70s.

Bill Morgan, best known for re-animating the Hacker-Craft brand in Silver Bay, also restored or built replicas of more than twenty Gold Cup racers of the 1930s, including Happy Times, a replica of El Lagarto.

After making several trips to the museum to take measurements, Morgan completed Happy Times in 1971.

“El Lagarto was the best Gold Cup boat in its time, and Happy Times is its duplicate,” Morgan told the Lake George Mirror in 1971. “Like El Lagarto, my boat with the five steps has the same distinctive leap which enabled the original to clear itself from the water and run a little faster than its competition.”

Many of El Lagarto’s Lake George contemporaries ended up on the scrap heap or on other lakes, but a few families who bought wood boats on Lake George managed to keep them, and by the mid 1970s there was still a critical mass of vintage boats, enough to hold a boat show in the village.

In August 1974, thirty-four antique boats were brought to the village docks by Morgan and others for the first boat show of its kind on the lake. After a picnic on Canoe Island, the boats’ owners discussed the possibility of establishing an international organization devoted to the preservation and appreciation of antique wooden boats.

That was the beginning of the International Antique and Classic Boat Society. Every year since 1975, its local chapter has hosted a Lake George Rendezvous.

In 2015, El Lagarto returned to Warren County for one last time – presiding, as it were, over that year’s Gold Cup Festival, a recreation of the 1935 Gold Cup race won by El Lagarto.

Earlier this summer, she inspired another tribute – “The Gold Cup!” a fundraiser for the Historic Preservation Foundation of the Lake George Club, El Lagarto’s home club.