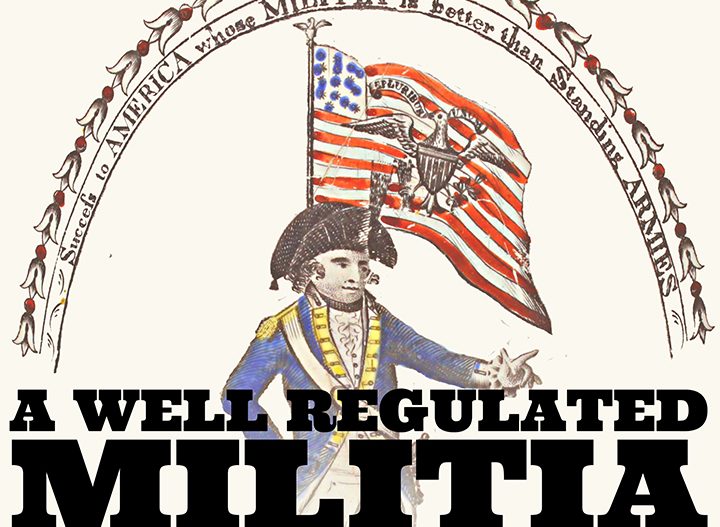 America’s early militias fought Native Americans, the French, the British, Canadians and even citizens of the US. For Anti-Federalists and Jeffersonians, the citizen militia was not simply an armed force; it was a school for civic virtue, an essential component of the prospective nation, like the yeoman farmer and small, heterogenous communities.

It is no accident that in the various “Bills of Rights” that were proposed at the thirteen state conventions called to ratify or reject the new Constitution, militias figure prominently.

Ultimately, though, there was little or no role for militias in the urbanized, commercial republic envisioned by Alexander Hamilton, where the pursuit of private wealth is honored and its effects on civic virtue disregarded.

By the time compulsory militia service was abolished, sometime in the 19thcentury, it was clear which side had won the argument over the kind of republic America was to be.

America may have made militias, but the militias did not, in the final analysis, make America.

“A Well Regulated Militia: Citizen, Soldier, and State,” a new exhibition at Fort Ticonderoga, allows us to re-litigate that debate among the founders by examining this distinctly American institution, from its inception in the 17thcentury through its gradual decline in the mid-19th century.

“The militia remains a poorly understood institution. It is virtually absent from our modern world, but it was central to debates over the Constitution and American identity as the nation was being founded,” Fort Ticonderoga’s Curator, Dr. Matthew Keagle writes in a statement about the exhibition. “Although intended as a military force, the history of the militia reflects the history of our nation, including debates about citizenship and military service, as well as the relative power of states versus the federal government, that are topics all Americans still encounter to this day.”

Imaginatively deploying more than 100 rare, visually compelling artifacts from Fort Ticonderoga’s collections, many on display for the first time in decades, the exhibit asks: How was the citizen-based militia constituted? Who was obliged or expected to serve? Who authorized and controlled it?  How was it armed, equipped and trained? How well did it function on the battlefield?

“A Well Regulated Militia: Citizen, Soldier, and State,” is evidence, if evidence is needed, that Fort Ticonderoga has never been limited to displaying uniforms and weaponry or thrilling tourists with musketry and cannon fire.

“Part of our mission is to connect the history that we talk about here to contemporary life,” said Keagle. “Why do we persist in preserving this material and displaying it to the public? It’s because these issues still have meaning for us.

We use an interest in military history as an opening to explore larger issues and to encourage sustained thought about our society and our history. The result, we hope, is a nation of citizens better informed than it might be otherwise.”

George Washington appears to have had his doubts about state militias, less because they challenged the centralized power of the new federal government, more because they were ineffective fighting forces.

As he wrote back in 1776, “To place any dependence upon Militia is, assuredly, resting upon a broken staff.”

According to Matt Keagle, Washington was not entirely wrong.

The militias, he says, “had a mixed record.”

“Either side arguing about the fitness of the militias can find supporting examples. There’s the humiliation of the New Yorkers at the Battle of Queenston Heights at the start of the War of 1812, where militiamen proved they weren’t capable of even crossing the Niagara River. On the other hand, there’s the Battle of the Thames, also in the War of 1812, where you see a unit of Kentucky volunteers achieve a stunning victory over British forces,” Keagle said.

Keagle points to one artifact on display to demonstrate the argument was a lively one: a pitcher on which a drawing of a militia officer has been transferred, along with the inscription: “Success to America whose militia is better than standing armies.”

Alexander Hamilton was a skeptic in part because, as he said at New York’s Ratifying Convention in June, 1788, “the whole people can never be fully trained.”

Keagle notes that the tension between the needs of the military and the society from which the soldiers were drawn was a persistent one.

“It was very challenging, putting these troops into the field, because it could mean removing the entire economic base of a community from civil society. So their active service was of limited duration,” said Keagle.

Among the artifacts on display is an order from the commander of Fort Ticonderoga in 1777, Arthur St. Clair, three weeks before General John Burgoyne’s overwhelming advance, dismissing a regiment from New Hampshire.

“He lacked the resources to feed the militia, but as the threat grew more imminent, he had to call upon others. As a commander, there was always this calculus: do I have enough provisions to keep the militia in the field, for as long as our military imperatives require? But that must be no longer than is strictly necessary, because I can’t afford to provision them,” Keagle explained.

From arguments about the proper role of militias in the economy, in civic life, on the battlefield, emerged a solution: a professional officer corps.

During the debates over the ratification of the Constitution, Anti-Federalists such as Patrick Henry conflated such a corps with “a standing army,” which most Americans feared and associated with tyranny.

(Even a militia regulated by Congress, as prescribed by Article 2, Section 8 of the new Constitution, represented a threat to liberty, Henry argued.)

Nevertheless, a trained and professional military service, answerable to the president and the legislature, was, over time, accepted by the vast majority of Americans.

As a nation, we have adjusted to that professional class of officers, not only because it is controlled by civilians, but because it refrains, as a matter of tradition, from partisan politics and political activity.

(When Gen. Mark Milley, the chairman of the Joint Chiefs of Staff, appeared to flout that tradition by accompanying President Trump to a photo opportunity at a Washington church last summer, he apologized. “I should not have been there,” Milley said.)

On the other hand, something of value is lost when the military recruits troops from a narrow segment of society – national cohesion, bound by shared sacrifice, for instance.

Was something similar lost by abolishing compulsory service in the citizen militias? A more expansive and profound understanding of the rights and responsibilities of citizenship, perhaps?

“A Well Regulated Militia: Citizen, Soldier, and State,” provokes us to ask such questions.

And we’ve yet to even broach the topic of the relationship between “a well-regulated militia” and the individual’s right to bear arms.

“A Well Regulated Militia: Citizen, Soldier, and State,” can be viewed at the ground floor exhibition gallery in the Mars Education Center. Fort Ticonderoga is open from 9:30am-5pm Tuesday-Sunday through October 31. For more information, visit FortTiconderoga.org.