Tim Barnett, Conservation Leader in Lake George and the Adirondacks, Has Died 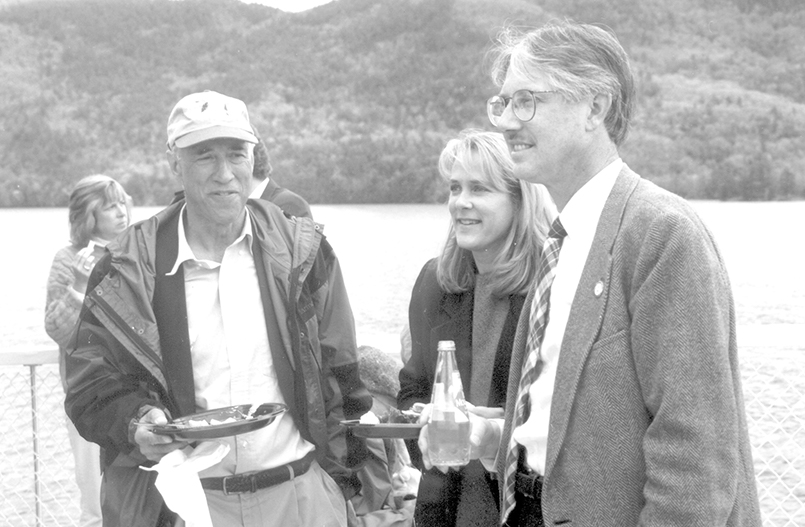 Land protection pioneer Tim Barnett, the first executive director of the Adirondack Nature Conservancy and a founder of the Lake George Land Conservancy, died on August 29 at the age of 82.

Barnett also served on the Lake George Land Conservancy’s Board of Directors for eleven years. In 2013, he was awarded the LGLC’s Henry M. Rowan Conservation Award.

Barnett grew up on Lake Champlain, in Westport, which his father, the writer Lincoln Barnett, first discovered as a camper at Dudley in 1925 and who moved his family there from New York in 1946.

After college, Barnett found a job as an advertising salesman for WPIX in New York.

“Selling TV time has no rewards except financial ones,” Barnett said in a 2013 interview with the Lake George Mirror. “I wanted to live in the Adirondacks and do something that satisfied my own sense of worth.”

It was the early 1970s; heady days for those committed to protecting the Adirondacks. The Adirondack Park Agency, a state land master plan and a regional zoning plan for private land, had just been created. All were recommendations of Governor Nelson Rockefeller’s Temporary Study Commission on the Future of the Adirondacks.

Another recommendation was that a private land trust be created to acquire critical parcels before they could be developed, and to protect them until New York State could add them to the Forest Preserve.

The Adirondack Nature Conservancy was soon established and the founding directors were casting about for an executive director. As it happened, they all knew Lincoln Barnett and knew that he had a bright young man for a son.

“They knew I knew nothing except that I was from the Adirondacks,” recalled Barnett.  “Fortunately, the board was composed of experienced environmentalists who had been fighting the battles of the Adirondacks for decades. And although I was a neophyte environmentalist, we broke new ground for the Nature Conservancy by pioneering landscape scale conservation in the Adirondacks.”

The Adirondack Nature Conservancy’s first offices were in Lake George, and one of the organization’s first acquisitions was the Dunhams Bay wetland, which it sold to the state in 1972.

By the end of the 1970s, the new organization had protected 94,000 acres throughout the Adirondack Park.

“It had become clear, very early, that this region demanded consideration at landscape scale, so we quickly moved toward protecting vast areas of habitat,” said Barnett. “We also recognized that New York state is a member of that landowner group and is, without question, our most important partner.”

By the late 1980s, the Adirondack Land Trust, which had been created with the assistance of Barnett and the Adirondack Nature Conservancy, had identified Lake George’s wooded hillsides as critical to its water quality, and in need of protection.

According to the current executive director of the Adirondack Chapter of the Nature Conservancy, Peg Olsen, who prepared a history of the Lake George Land Conservancy for its 25th anniversary, “the next question was, do any landowners in the Lake George basin have any interest whatsoever in conserving their land?”

Olsen continued, “Results of the survey confirmed a high interest by landowners in conserving their land for future generations and identified a strong rationale for creating a local land trust that could meet this demand.”

The creation of the Lake George Land Conservancy was one response to an acceleration in the annual deterioration of Lake George, its founders said at the time.

For Barnett, the creation of a Lake George Land Conservancy was “an opportunity for a much more focused conservation effort.”

“I try to empower people to do the jobs that I feel need to be done,” he said in 2013. “And since local efforts need the support of larger organizations, the Adirondack Nature Conservancy agreed to support the Lake George Land Conservancy with internal, administrate assistance.”

The Fund for Lake George (which merged in 2021 with the Lake George Association) provided the financing needed to get the organization up and running.

The Fund’s trustees were also instrumental in raising the money necessary to complete its first purchase, lands on the east shore, opposite Silver Bay.

By 1990, within two years of the organization’s founding, the $2.5 million price tag was met.

Since then, the Lake George Land Conservancy has gone on to protect thousands more acres of environmentally sensitive lands and many more miles of shoreline.

In 1997, having protected 240,000 acres in the Adirondacks, Barnett took a sabbatical to work with the World Bank’s Tien Shen Mountains Trans-Boundary Program to help build teams in Uzbekistan, Kazakhstan, and Kyrgyzstan to manage natural areas.

Part of the job entailed riding horseback into mountain villages.

In a Zapovednik (State Reserve) in the remote Kyrgyz mountains, Barnett fell from his horse and sustained a severe spinal cord injury. He attributed his survival to Yrysbek Manelov and a traveling support team; his colleague, Nigel Coulson, and his wife Christine and volunteers who orchestrated the cross-border helicopter rescue to an emergency room in Uzbekistan; the local guides who stayed by his side for the 24 hours it took the rescue team to reach him; and the medical staff at Balgrist Hospital in Zurich, Switzerland, where he spent two months recuperating after surgery.

Tim Barnett attended Westport Central School, the Riverdale Country School, and the Stockbridge School, then Middlebury College. After serving in the U.S. Army and on the Army ski patrol in Garmisch, Germany, he completed his undergraduate studies at the University of Colorado at Boulder. He worked for the New York City-based Louis Harris opinion polling firm where he met his wife Claire. In 1972, the couple moved to the Adirondacks.

Barnett is survived by his wife Elizabeth Claire Lillis Barnett, their sons Ian Kinnear Barnett and Edward MacInnes Barnett, and six grandchildren, all in Colorado; his brother Robby Barnett in Connecticut; and many nieces and nephews. A celebration of his life will be held at a later date. The family requests that donations in his memory be made to The Adirondack Land Trust, P.O. Box 130, Keene, NY 12942, or to “The Adirondack Chapter” of the Nature Conservancy, P.O. Box 65, Keene Valley, NY 12943.