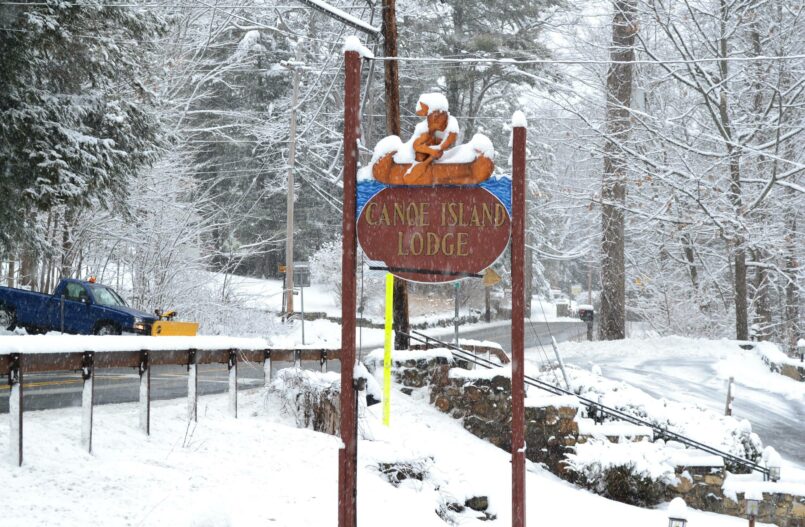 Canoe Island Lodge, the classic Lake George resort and a 2.7-acre island that was a 19th century campground for the American Canoe Association, have been purchased for $10.7 million by real estate preservationist Ginger Cannon Bailey.

The purchase of the island and the 30-acre resort was completed December 16, said listing agents Dan Davies and Pam Dean of the firm Davies and Davies.

Bailey, who is also CEO of Racemark International and GGBailey, Racemark’s retail division, said she was “very confident” that the Diamond Point resort will re-open this spring as it has every spring for more for than seventy-five years.

“As we start taking reservations, we will give priority to those who have been coming to Canoe Island Lodge for years, some since they were children, some for multiple generations,” said Bailey.

In a typical summer-long season, a staff of 65 full and part time employees serve as many as 150 people every week. Much of the staff is expected to return.

Bailey, who describes herself as “a serial entrepreneur,” said she will manage the resort with a view to a sustainable future, employing the expertise of consultants such as Andrew Weibrecht of Lake Placid’s Mirror Lake Inn.

“I have a vision for what we can do that will honor Canoe Island Lodge’s history, while, at the same time, creating something unique on Lake George,” said Bailey, who preserved and restored the historic 1911 Lake George home of New York State Senator H.E.H. Brereton.

Carla Burhoe, whose father Bill Busch opened Canoe Island Lodge in 1946, has owned and operated the resort with her husband Tom since 1997.

“I’ve often described the resort as a camp for families,” said Carla Burhoe. “It evolved in the era of Catskill-type resorts, which is one that is nearing its end. Tom and I extended it here on Lake George by another twenty-five years and we feel gratified that we were able to give our guests those extra years. Still, there were a lot of tears as we told our guests that 2022 was the family’s last.”

The Last of the Cabin Colonies

According to Carla Burhoe, the resort currently comprises 25 main buildings, 45 units and the undeveloped island.

Like most cottage-based resorts built on Lake George in the post-World War II era, Canoe Island Lodge adopted the American Plan, which provided guests with meals – in addition to lodging, entertainment and recreation – all for one, inclusive price.

According to Bailey, the restaurant will feature a new a’ la carte dinner menu showcasing a wider selection of food choices from local farms.

“I want guests to have good, healthy food, with plenty of options,” she said.

The restaurant as well as the resort’s amenities – tour boats, island picnics and barbeques – will remain for guests only.

The Greening of a Resort

According to Ginger Bailey, Lake George is Canoe Island Lodge’s “selling point,” and protecting the lake will be central to the resort’s brand and mission.

“It’s among the most beautiful and cleanest lakes in the world,” said Bailey.

Reducing runoff from the developed portions of the property, which could discharge pollutants into the lake, is among her priorities, she said.

“Our plan is to reduce the density of the resort, remove as much asphalt as possible, screen parking areas with vegetation and introduce natural landscaping and native plants to divert and filter run off,” said Bailey.

The island will remain in its natural state, she added.

“Our wish is to preserve something that would have been lost had the island been purchased by a developer,” said Bailey.

“There were a lot of developers looking at the island,” Bailey continued. “Had one of them purchased it, that would not have been good for the lake.”

“Ginger Bailey is a steward of the lake,” said

According to Davies, local zoning regulations would have permitted the 30-acre resort property to be subdivided and developed with homes – as many as six on the lake shore and substantially more on the hill above the lake.

“That was also something of concern to Ginger,” said Davies.

According to Davies, the listing “drew attention from across the country.”

“When it came time to sell, I had hopes that somebody who respected the lake would take over. I told Ginger Bailey, ‘I’m glad it’s you,” said Carla Burhoe, a former president of the Lake George Association and a colleague of Ginger’s husband Bob, a current member of the organization’s board and former vice chairman of The Fund for Lake George.

Long active in the protection of Lake George, Bob Bailey was an early member of The Fund, where he is credited with recruiting board members such as Dr. John E. Kelly III, who was Senior Vice President & Director of Research for IBM at the time and helped create the Jefferson Project, the collaborative effort of IBM, Rensselaer Polytechnic Institute and The Fund to make Lake George a global model of ecosystem protection. More recently, Bob Bailey played an active role in the merger of The Fund for Lake George and the Lake George Association.

With the crash of the stock market in 1929 and the Great Depression that followed, there was little demand for the mansions and grounds that had given their name to “Millionaire’s Row.”

Woodward apparently recognized that one era had come to an end and a new one was about to begin: Lake George as a vacation destination for working and middle-class families.

Woodward bought eighteen estates and built cabin colonies on all of them.

After acquiring Canoe Island from Woodward – using bushels of buckwheat seed from the family’s Albany County farm as a down payment, according to Carla Burhoe – Busch bought land on the west shore of the lake and built six cabins, opening for business in 1946.

“They just kept expanding the resort as the years went by, removing some buildings, constructing others,” said Carla. “My dad had a ‘learn as you go’ attitude.”

Bill Busch died in 2000, Jane Busch in 2015, but their names remain on Canoe Island Lodge’s iconic sign on the west side of Route 9N.

(That sign, by the way, was fabricated by Jack Binder, the onetime comic book artist who was responsible for many of Fort William Henry’s displays. Ginger Bailey said the sign “will be honored” but did not commit herself to retaining it at its original site.)

Canoe Island and the Birth of the ACA

In 1974, seven wood boat enthusiasts gathered for a picnic on Canoe Island and agreed to form the Antique and Classic Boat Society, now the largest and most prestigious fraternity of its kind in the world.

Ninety years earlier, another group of wood boat enthusiasts, or “canoe cranks,” as they were then known, purchased Lorna Island and renamed it Canoe Island, the name it bears today.

When they met again in 1880, the island was the camp for thirty canoeists who had traveled to Lake George for the first official regatta of the new American Canoe Association.

According to an 1880 issue of the Lake George Mirror, “the canoeists were so well pleased with their new quarters that they desire to return to the island next year. Racecourses are to be surveyed on the east and west sides of the island, which will be the future school of canoe tactics.”

Over sixty men camped on the Canoe Islands during the regattas of 1881 and 1882. The American Canoe Association continues to represent the interests of the sport to this day.

Protecting the Lake and the Economy

According to Dan Davies, preserving Canoe Island in its natural state and the Lodge as a resort produce the best possible outcomes, not only for the water quality of Lake George, but for its economic fabric.

“How do people fall in love with Lake George? You come for a vacation, and sooner or later, you end up purchasing a home here. That drives the economy,” said Davies.

As more resorts close and are replaced by vacation homes, fewer people have the opportunity to discover Lake George for themselves, he said. “The loss of Canoe Island Lodge would have been detrimental to our resort economy. But thanks to Ginger Bailey, families will still be able to enjoy the lake. That makes this transaction a very special one,” said Davies.