The Trails of the Adirondacks: Hiking America’s Original Wilderness 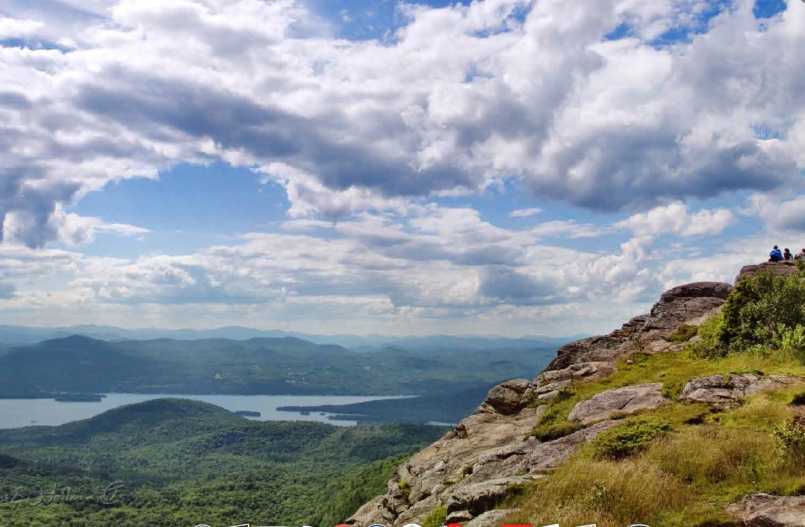 National Trails Day, celebrated on Lake George by the Lake George Land Conservancy, fell this year on June 1. (To honor Trails Day, a nationally coordinated event created  to entice people at all levels of fitness into the outdoors, the Conservancy sponsored a hike through Amy’s Park,  led by an expert on Castor canadensis, otherwise known as the North American beaver). It seemed the opportune time to open Carl Heilman’s new book of photography, “ The Trails of the Adirondacks: Hiking America’s Original Wilderness.” The coffee table-sized book has been published in association and with support from the Adirondack Mountain Club.

As Bill McKibben notes in his foreword to the book, “most protected areas in the country focus on spectacular granite or ice (but) the Adirondacks include everything, from the rocky tops of the High Peaks to the boggy lowlands and boreal stands of the other five million acres. And the Adirondacks are the best picture we have of a recovered place: a century ago most of this land was cut over, cleansed of wildlife. Now, guarded by state law, it has grown back into earth’s most remarkable illustration of rehabilitation. A second-chance Eden. All of which should be an incentive to come hike its trails.”

Not that everyone includes Lake George on their mental or emotional map of the Adirondacks. Kenneth Durant, the eminent historian of the Adirondack guide-boat, once wrote to Paul Jamieson: “When I was half as old as I am now we could say unctuously, ‘There are no venomous snakes in the Adirondacks,’ reciting a bit of nature lore:  ‘Rattlesnakes do not advance beyond the oaks.’  Then, when I was not looking, someone moved the Blue Line around Lake George and took in oaks and rattlesnakes–and worse.”

To be sure,  the west and east shores of Lake George were added to the Adirondack Park  relatively late,  in 1931.  Our region’s affiliation with the the Forest Preserve and the preservationist impulse, however, dates back farther than that.

Ever since then, New York has slowly and, of course,  to a limited degree,  reacquired lands that it once owned itself , having taken possession of lands once claimed by the Crown, which the state then gave to revolutionary war veterans or sold in vast tracts speculators  in order  to promote  settlement.

For the past thirty years, this has been done with the assistance of the Lake George Land Conservancy, protecting land until it could be sold to New York State and added to the Forest Preserve or maintaining it as one of its preserves.

In recent years, the Conservancy has pioneered another land protection strategy: collaborating with municipalities  to take land off the market, attach development restrictions to it and then sell at discounted rates to town governments, which gain new public recreational resources.

Thus, in its way, the Lake George adds to “the picture we have of a recovered place…earth’s most remarkable illustration of rehabilitation,” to quote McKibben.

“The Trails of the Adirondacks: Hiking America’s Original Wilderness,” also alludes to the overcrowding of the High Peaks. In fact, the book’s mission is, at least in part, to encourage people to explore lesser known sections of the Adirondack Park.

Lake George is now in a position to accommodate those hikers. Among its trail system are many hikes  that seem to apeal to a general audience – moderately strenuous at best, leading to views that can be achieved with an hour.

And according to Jamie Brown, the Lake George Land Conservancy’s executive director,  a recent $40,000 grant from New York’s  Conservation Partnership Program is to be used to improve parking lots and other amenities, such as kiosks and signage,  addressing the needs of hikers, before they begin to arrrive in significantly denser crowds.

The improvements are part of a new effort by the Conservancy, the Town of Bolton and the Bolton Landing Chamber of Commerce to make and market the community as a recreational hub of the southern Adirondacks.

If fully implemented, a recently-completed plan would would allow hikers access to a trail system that would lead to the Pinnacle, Cat and Thomas Mountain and preserves bordering the Tongue Mountain Range.

In fact, that trail system’s head could be the hamlet of Bolton Landing itself, where hikers would return for food, craft beer, lodging and perhaps even gear, bracing the town’s economic foundations.

And as Bolton Supervisor Ron Conover says, “We can then find a way to link  our hiking trails with those of other towns in Warren County with recreational assets, such as bicycling opportunities, and market the entire southern Adirondacks as one, recreational destination.”

Contributors to “The Trails of the Adirondacks: Hiking America’s Original Wilderness” include Neil Burdick as well as Carl Heilman II and Bill McKibben.

“The Trails of the Adirondacks: Hiking America’s Original Wilderness” is available at Trees, the Main Streetbook shop in Bolton Landing.