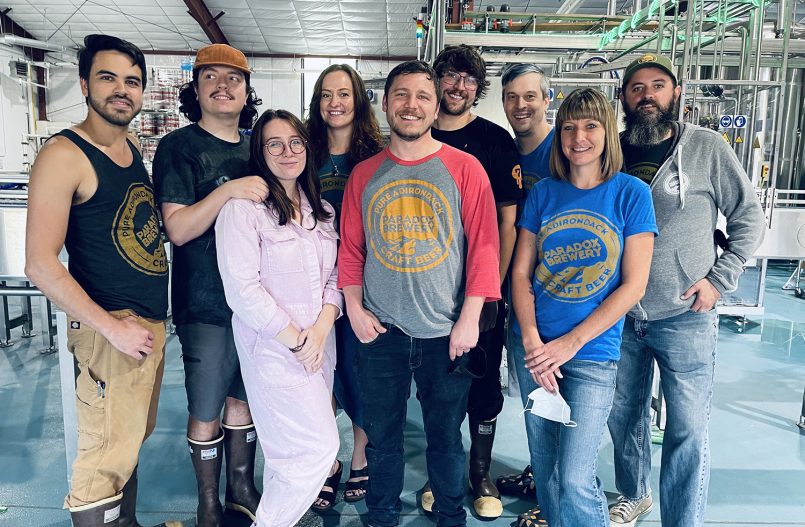 Twenty five years ago, while vacationing with my wife at rustic Elk Lake Lodge, a fellow guest remarked that his plans to spend his final day in the Adirondacks bagging one more peak had changed; instead, he would  visit downtown North Hudson.

Despite my best efforts, I was unable to persuade him there was no downtown North Hudson.

Were he to visit today, he might find – if not a downtown – at least a commercial core, thanks in large part to Paradox Brewery.

When the brewery broke ground on its new plant in North Hudson in 2018, it was envisioned – at least by the administration of Governor Andrew Cuomo – as part of a new $20 million tourism hub at “the Gateway to the Adirondacks,” one that would give access to the park’s recreational resources from one strategic location and stimulate economic development in an area – along the old state highway – where for decades there was none.

Situated near the entrance of the state’s new Frontier Town Campground, on a 11.2-acre parcel once owned by the former theme park, the $7  million brew pub now includes state-of-the-art automated equipment, a tap room, a restaurant kitchen, indoor and outdoor seating, fire pits and live entertainment.

A May 4, 2021 ruling by New York State’s highest court blocking construction of snowmobile trails from Indian Lake to North Hudson because they would violate the state constitution’s Forever Wild clause may delay the arrival of some anticipated economic benefits.

And, as brewery Operations Director Devin Hamilton puts it, “Covid-19  threw a wrench into the works.”

In fact, Paradox Brewery is benefiting from and contributing to an emerging outdoor recreation-based economy in an under-utilized – and under-appreciated – slice of the Adirondack Park.

Among other signs of vitality, Tammy Whitty-Brown, the director of the Schroon Lake Chamber of Commerce, has purchased a vintage roadside motel near the brewery and is in the process of rehabbing it to appeal to contemporary travelers.

And on September 25, Muhammed “Mo” Ahmad hosted a grand opening of his new rest stop, restaurant and High Peaks Wilderness welcome center in the Frontier Town A-Frame at the Northway’s Blue Ridge exit.

And the crowds are starting to come.

Craft beer afficiandos unfamiliar with Paradox Brewery find their way here while travelling I-87, or from craft beverage trail maps.

This past summer “was gangbusters,” said Devin Hamilton, as summer residents, tourists, hikers and those using DEC’s new campground and day use area discovered the brew pub.

Winter weekends are expected to be equally busy with downhill and cross-country skiers and snowmobilers.

And with the addition of the kitchen, which opened in February, 2021, “we’re getting a good following of local people coming in for lunch and dinner,” said Hamilton. “So much so, we’re expanding our hours of operation.”

Besides attracting tourists, the brewery is contributing to the local economy in other ways as well.

According to Britt, the brewery’s spent grains are shipped to a local farm for use as cattle feed; in exchange, the brewery receives beef which is made into burgers.

Britt said he is also making every effort to source his foods locally “to keep money in the area and to support other businesses.”

The old Route Nine corridor may not be growing as rapidly as Governor Cuomo’s 2017 Master Plan for the area projected – much of the anticipated public and private investment has yet to materialize – but thanks to entrepreneurs such as Paul Mrocka, Tammy Whitty-Brown, Muhammed  Ahmad, their families and staffs, a kind of economic development, one more sustainable than one drafted in Albany, is possible. It may take time to produce results, but the wait will be worth it. “We’re building a community of businesses that support one another,” said Jarrod Britt. “We’re confident that community will just keep growing.”