OUR MANN IN BEIJING

We talk to Brian Mann, an Adirondack journalist covering the Winter Olympics for National Public Radio 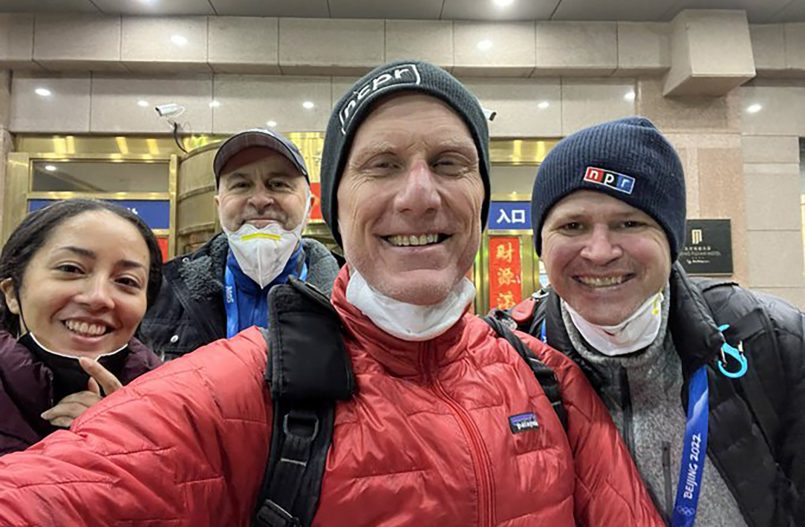 Brian Mann arrived in Saranac Lake roughly twenty-five years ago to open North Country Public Radio’s Adirondack bureau. Since then, he’s come to be regarded as one of the state’s most talented journalists – an assessment affirmed by National Public Radio, which hired him away from NCPR in 2020.

Assigned to cover America’s other pandemic – the opioid crisis – Mann’s NPR beat now ranges across any number of topics, including the 2022 Winter Olympics, from which he spoke to a reporter a few days after the games’ Opening Ceremonies.

“I love the Olympics; I’ve covered them from Lake Placid and the Adirondacks for years,” said Mann. “The chance to join the NPR team covering the games here in Beijing was an opportunity I couldn’t pass up. It’s definitely a bucket list moment for me.”

As chance would have it, Mann flew to Beijing with Olympian and Lake Placid resident Lowell Bailey as his seat mate.  Both were masked for the entire 14-hour flight, as required by COVID-related protocols.

According to Mann, COVID is shaping the limitations placed upon the journalists attempting to cover the Olympic games and athletes, even more than a reportedly suspicious, intrusive Chinese government.

“Obviously, we are working in an authoritarian country with a Communist government, but what’s affecting the athletes and the journalists the most does not have an ideological feel. The Chinese take pandemic security very seriously and it is the COVID-related rules that are restricting our movement and our opportunities to interact with average Chinese people,” said Mann.

(Perhaps with good reason. According to another journalist, Brian Rooney, at least 459 people with Olympic credentials, including 154 athletes and team officials, have tested positive while in China as of Feb. 8.)

With the pandemic limiting the size of the audiences at the events, the ambience is “definitely weird,” said Mann.

“These Olympics are in many ways defined by the pandemic.  It’s baked in.  No one expected this to feel ‘normal.’  And it doesn’t feel normal.  The cool thing is watching these young athletes still making the best of it and trying to milk their Olympic moment for as much joy as possible,” Mann said.

Leaving aside COVID, capitalism has had a greater influence on the reporting emanating from China than communism.

In 2014, NBC reportedly paid the International Olympic Committee $7.75bn for exclusive rights to broadcast the games to the US until 2032.

“The contractual arrangements between NBC and the IOC are very strict and severely limit what other journalists can and cannot do, going so far as to determine when and where we can conduct interviews with athletes,” said Mann. “That restricts our ability to do our jobs. It’s frustrating, but we’re doing our best to tell stories in rich accurate ways, despite all the hurdles.”

(Has that exclusive coverage made for better journalism? Probably not. The Guardian dismissed NBC’s coverage as “televisual vomit.”)

Journalists are corralled into prescribed areas and bussed as a group from venue to venue – an experience not unknown to Mann, but different from the way he worked most often in the past, driving hours to cover an Adirondack community meeting, a guide-boat regatta or a tragic accident, typically by himself.

“It’s true, I generally prefer to work alone; it allows me to settle into a story more deeply,” Mann concedes. But, he adds, “it’s also fun to be surrounded by other really great reporters.  It’s a cool culture.”

Elaborating, Mann says, “A lot of fun, creative and often weird people wind up working as reporters.  So being here, surrounded by reporters from all over the world, is exciting.”

He believes his experience in the Adirondacks has enriched his reporting about these and other athletes, as well as the events in which they compete,

“Living and working around Lake Placid through so many past Winter Olympics, I’ve definitely built up a better sense for these sports than I would have had otherwise,” Mann said.  “And I know many of the former athletes who are now coaches or team leaders.  So that gives me a head start on following the competition.  I’ve also come to just love these sports.  I really get amped up watching luge racing and biathlon in particular.”

Asked to assess his move from North Country Public Radio to Washington DC-based National Public Radio, Mann replied, “The move to NPR has been crazy good.  I love North Country Public Radio but I’m in my mid-50s and if I wanted to play in a different sandbox, this was my moment.  And it turns out that NPR has a wonderful newsroom culture, curious, warm and supportive. NPR also agreed to let me stay in the Adirondacks, which means I can still turn on the radio in the morning and hear NCPR co-hosts Todd Moe and Monica Sandreczki!”