Hague: A Little Town that Not Only Could, but Did 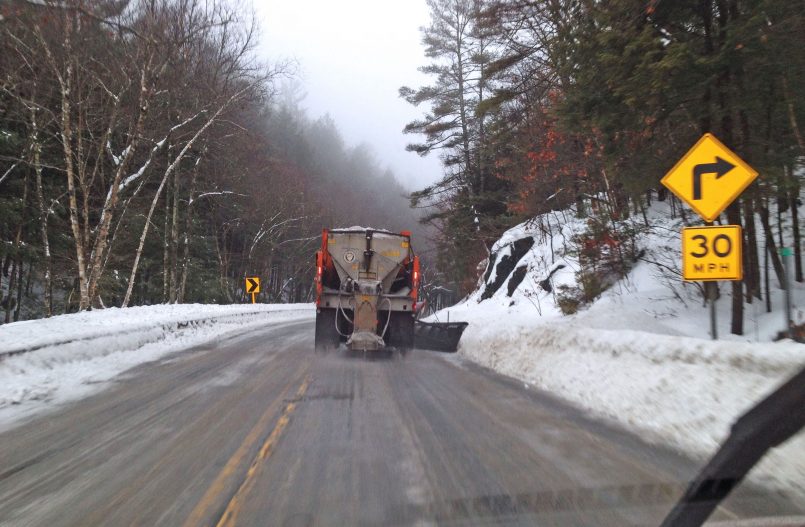 Hague plows not only local and county roads, but the state highway, bringing its innovative policies to the attention of Albany.
By Anthony F. Hall

Salt levels in Lake George tripled over 30 years, from 1980, when New York State and local governments began applying tons of rock salt to their roads in response to a public demand for uninterrupted travel, to 2010, when RPI’s Darrin Fresh Water Institute completed an analysis of three decades of trends in water quality.

Local governments, state agencies and environmental protection groups such as The Fund for Lake George, which financed RPI’s study, promised to reduce the use of salt within the watershed by 50%, putting the lake on a path to recovery.

As documented in The Fund’s new film, “Road Map to Road Salt Reduction: Success Stories from Lake George,” that goal is now within sight.

“Over the past six years, we have worked closely with Lake George municipalities to employ best practices: using salt in smarter ways, coupling that with more effective equipment and sophisticated tracking techniques. This is the recipe for the protection of our resources.  The results speak for themselves,” said Eric Siy, The Fund’s executive director.

Among the success stories recounted in the film is that of Hague, the county’s most remote lake shore community and one of its least populous.

Its highway department, however, is responsible for state and county highways as well as town roads, winning the attention of much larger governmental entities.

“Hague has achieved a reduction in salt use in excess of 50% and a 45% reduction in its annual winter maintenance budget. These are real numbers,”said Eric Siy. “The town is delivering lasting returns for our environment and our economy.”

Steve Ramant, Hague’s deputy Supervisor and among those interviewed in the film, said, “Our highway department crews knew the way winter road maintenance was being managed was not as protective of Lake George as it could be. But they listened to the scientists. They grasped how they could make things better for the lake, which is the economic engine for this entire region. Now other highway departments are coming to us for information.”

Tim Fiallo, an operator of Hague’s snow and ice removal trucks and machinery, said the first recommendation adopted by the town was to use segmented or “live edge” plows, which conform to a road’s uneven, sometimes erratic surfaces.

“We couldn’t believe the difference,” said Fiallo, noting that an efficient removal of snow and ice will require less salt to dissolve frozen concentrated matter later.

The Highway department also began manufacturing brine, the liquid solution that uses 50% less salt per lane mile and helps prevent ice from bonding to the pavement in the first place.

“With brining, the snow doesn’t stick to the road, so the roads can be scraped clear more easily. And you can put less salt down during the storm event without any impact to road safety,” said Lake George Waterkeeper Chris Navitsky, himself a Hague resident.

Hague’s highway crews are also using tracking systems that deliver accurate information about where, when and how salt is spread, enabling them to use de-icing agents more efficiently and effectively.

“Tim Fiallo is a leader in data tracking and in the application of technology,” said Navitsky. “Hague is at the highest level, bringing weather forecasting into its planning, tracking the changes that affect how the department will approach a storm,” said Navitsky.

In years past, highway departments would calculate the amounts of salt and sand required or an impending storm based on a local television weatherman’s predictions.

“The storm would come and they would go out and start plowing and salting, return and load up on more salt. Go out and drop the salt. It was almost impossible to arrive at the right amount of salt to keep the roads safe without applying too much. We didn’t have the expertise or the technology to monitor and respond to air and surface temperatures and track our use of salt,” said Ramant.

Hague’s highway department may have slashed as much as $66,000 from its annual winter road maintenance budget, town officials say.

But according to Eric Siy every community within the Lake George Watershed has signed a Memorandum of Understanding, drafted and circulated by The Fund, that pledges all parties “to work in good faith to create an effective program to reduce the levels of salt application surrounding Lake George.”

New York State’s Department of Transportation applies brine to Route 9N as part of a pilot project launched two years ago to reduce the application of road salt along the lake.

“We’re working toward serious changes in the business of road de-icing,” said Siy. “Governor Cuomo’s staff has told me that the state is keenly interested in what we can achieve.”

So, too, are other communities. According to Siy, more than 140 municipal officials from across New York State registered for an on-line event in which the film premiered, and winter road management experts were available to answer questions.

“Road salt is considered to be the acid rain of our time,” said Siy. “On Lake George, an estimated 15,000 metric tons of road salt is applied every year to roadways. It’s twice that amount when driveways, sidewalks and parking lots are included. That’s enough salt to fill 300 rail cars, or a train three miles long. Every year, the impacts to water quality, the environment and our economy become increasingly clear. But here’s the good news. Unlike acid rain, we can solve this issue here and now.”

The Fund for Lake George will sponsor its sixth Salt Summit in September 2021.

According to Siy, topics will include strategies for exporting the Hague model to every community in New York State.

Hague’s demonstration that huge cost savings can be extracted from the responsible or smart use of salt is especially relevant in an era of budget constraints, said Siy.

“With 932 towns statewide, at the annual rate of savings being realized by Hague, even if only half the towns in New York were to achieve similar results, the net savings would be more than $30,000,000. When applied across the state’s 62 counties statewide, the results will be orders of magnitude higher,” said Siy.

“We hope this year’s summit can be in person, rather than on-line,” said Siy. “But the success of the on-line film premiere leads us to believe that we can have an even larger impact if we present some or all sessions on-line as well.”