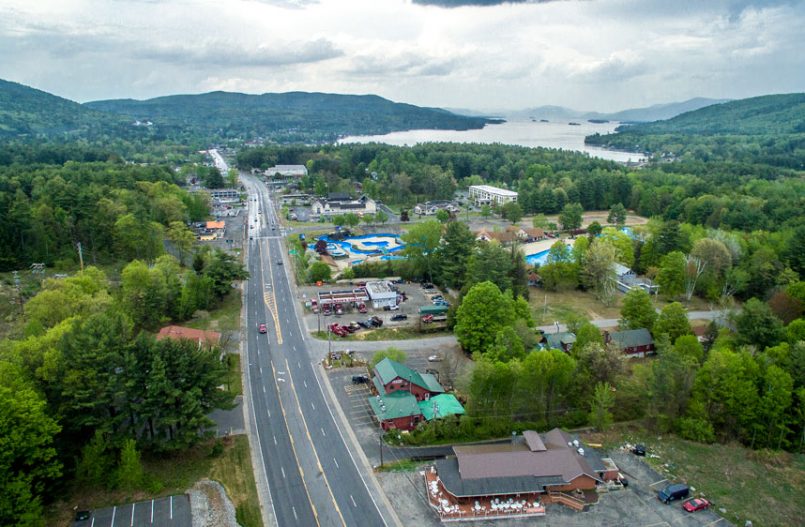 How the Town and Village are Making Lake George Climate Smart, Energy Efficient

Intense storms like Florence, once expected to occur every hundred years or so, now arrive with increasing frequency.

Irene battered Lake George in 2011. It was the most destructive storm to hit New York since Hurricane Agnes in 1972, until 2012, that is, when New Yorkers experienced the the wrath of Sandy.

A function of climate change, extreme weather is something even small communities like Lake George must prepare for, says Jim Yienger of Watervliet-based Climate Action Associates

That is precisely what the Town and the Village of Lake George are doing – preparing for the effects of climate change by finding ways to mitigate some of the damage – as well as doing its part to reduce New York State’s carbon footprint.

For example, Lake George was the first community between Glens Falls and Plattsburgh to install electric-vehicle plug-in stations. Scientists say that that 30% of the carbon dioxide and other global-warming gasses emitted by the US into the atmosphere come from the end of a tail pipe, so given the numbers of cars, motorcycles and trucks that pass through Lake George every summer, it’s not surprising that the Town and the Village seized an opportunity to reduce the quantity of those emissions at least by a small degree.

According to Dan Barush, the director of planning for both the town and the village, Lake George is in the process of completing ten of the initiative’s so-called “High Impact Actions” that will reduce its use of energy, cut costs and promote the transition to clean energy.

Lake George is also taking steps that will make it the first Department of Environmental Conservation-certified Climate Smart Community within the Adirondack Park.

By fulfilling the requirements of both programs, Lake George will qualify for more state funds to help it address climate change.

“Both NYSERDA’s Clean Energy Initiative and the DEC’s Climate Smart Community Program dovetail perfectly,” said Barusch. “Some actions are required by both programs, such as the creation of a local Climate Action Plan. We expect to have ours completed before January, 2019.”

New York has awarded the Town of Lake George a $25,000 grant to help fund its Climate Action Plan, which an intermunicipal Go Green Committee is drafting with the assistance of the Watervliet-based Climate Action Associates.

According to Barush, the committee and its consultants are auditing Lake George’s energy use and completing a greenhouse gas inventory, which will enable it to calculate the sources and amounts of gas emitted from municipal facilities every year and establish baselines for quantifying the effectiveness of future conservation initiatives.

“We’ve learned that as far as governments go, we’re conservative in our use of energy,” said Barusch. “Almost 40% of the town’s energy use can be attributed to the pump stations connected to the Village’s wastewater tratment plant. The Town Board is considering options to make those more efficient.”

The Village’s wastewater treatment and water filtration plants are also heavy consumers of electricity. Other sources of energy use include the town’s highway garage, transportation fleets, energy inefficient buildings and even employees’ commutes.

Strategies to constrain the use of energy include building a centralized vehicle repair garage for the town, village and school district and even banning the idling engines of town vehicles.

“We’ve done a number of things to bring our numbers down, from making our buildings more energy efficient to retrofitting them with LED lighting,” said Barusch.

The Go Green Committee is also assessing the community’s natural resources – the lake and its tributaries in particular – in order to determine how these will be impacted by severe weather.

A crucial question is whether the existing infrastructure – culverts, pipes, stream banks, sea walls and bridges – are strong enough to withstand flooding.

Officials say that the community’s next steps include a tree planting program that will help absorb pollution, trap carbon and cool the streets and parking lots.

“I wish we could have planted more trees in the median on Route 9. It’s one more way for us to be climate smart,” said Supervisor Dennis Dickinson.

However, the forested lands surrounding Lake George, both public and private, currently offset as much as 85% of the carbon produced by traffic, said Dan Barusch.

Village Mayor Bob Blais said he would like to see the community move more quickly to adopt solar power.

“We lag far behind municipalities just across the border, in Massachusetts, for instance,” said Blais.

Dan Barusch said the Go Green Committee is evaluating a number of proposals that will enable the two municipalities, as well as local residents and businesses, develop more sustainable sources of energy.