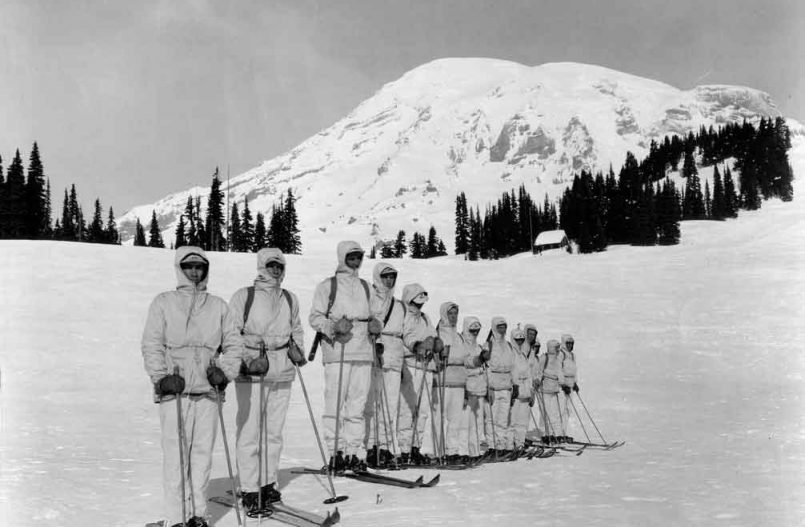 Hal Burton. Arthur Draper. James Goodwin. These figures, each one an Adirondack legend, opened the area to winter skiing, from the backcountry ski trail on Wright Peak to the first downhill runs at Whiteface.

Not coincidentally, all three were members of the 10th Mountain Division, created in 1940 to provide the US Army with ski troops, soldiers who could fight an Alpine War. It would find glory in the Italian campaigns in the final months of World War II, as historian Maurice Isserman recounts in his new book, “The Winter Army.”

Inspired by the Adirondacks

The division’s founding father, Charles Minot Dole, was also a founder of the National Ski Patrol, which recruited volunteers for the new units from prep school and Ivy League ski teams and outing clubs. Later, it would help train those without these backgrounds.

(In 1943, Dole said the National Ski Patrol was “eager to contact (all) husky school boys and collegians who have a burning desire to serve with the mountain troops… almost any Eagle Scout has the makings of a mountain trooper.” Mountaineers, rangers, trappers, timber cruisers and “men with outdoor backgrounds” in general were encouraged to enlist in the new force.)

Dole was introduced to skiing in Lake Placid shortly after the 1932 Olympics, and the Adirondacks helped shape his understanding of the need for ski troops and of their tactical role in any new military conflict.

Dole knew his history. Contemplating Lake Champlain, Lake George and the Hudson River, he could see in his mind’s eye “the Great Warpath,” the waterways and valleys that opened the colonies and the new nation to French and British invaders.

According to Isserman, Dole warned the US Army of “well–trained German mountain troops pouring down the St. Lawrence River and the Champlain Valley. If that came to pass, who would stop them? Only equally well-trained American troops, aided by a national ski patrol…”

Dole imagined America’s own ski troops “swooping down from the ridgelines of Vermont’s Green Mountains to attack columns of German gebirgsjager.”

With support from Secretary of War Henry Stimson, – a man familiar with the Adirondacks from his frequent visits to the Ausable Club in Keene Valley – the mountain army was sanctioned.

Of course, the US was never called upon to use its ski troops to defend the exposed flanks of the North Country. Instead, the 10th Mountain Division would prove its mettle in another theater of war, the Apennine Mountains of Italy, where it overcame an obstinate, all but immovable German army. (Although once the ski troops reached the front, they donned their skis no more than three times, as Hal Burton recalled.)

Even before shipping out in late 1944, the 10th Mountain Division was fulfilling a patriotic duty in other ways, namely, boosting the nation’s morale.

Newspapers, mass-circulation magazines and even Hollywood found the ski troops irresistible: they were (or seemed to be) what all Americans aspired to be.

These Americans were educated, physically fit, raised in material comfort and, it goes without saying, white.

They came from an America that was unlike the nation that most Americans saw daily, which was urban, industrial, heterogeneous, without networks of influential connections and economically tenuous.

As the war progressed, and the democratic spirit spread throughout the nation’s institutions, less privileged troops grew resentful of the attention lavished upon this one elite division.

And in truth, by the spring of 1945, hundreds of replacements were needed to fill the depleted ranks of the 10th Mountain Division, including “men who had never skied or climbed mountains” in their lives, a flatlander from Kansas named Bob Dole among them.

But in the war’s early years, the attention and the publicity given to the 10thMountain Division probably contributed to its esprit de corps, which, when combined with its grueling training in the Rockies, helped make it the effective fighting force it turned out to be.

One cannot help but also wonder: did the values of service and sacrifice that so many of the volunteers absorbed in the prep schools and colleges of New England inform their military discipline?

The Fog of War

However much material it may provide for sociological speculation or reflections on civil-military relations, “The Winter Army” is, above all else, military history.

We never lose sight of the infantryman’s perspective, which permits us to see the connection (and more often than not, the lack of connection) between the US Army’s over-arching political and strategic aims and the means available to achieve them.

(With granular particularity, Isserman shows us what the individual infantryman saw, which was usually horrific.)

And as military or battlefield history, “The Winter Army” has its own innate, compelling narrative, carrying us from the regiments’ landings in Naples to the climactic assaults on Riva Ridge and Mount Belvedere.

In the field, the 10th Mountain Division’s informal motto, “Sempre Avanti,” or “Always Forward” inspirited the soldiers and propelled them forward.

But Isserman questions whether that principle should have influenced American strategy in Italy in the final months of the war as much as, apparently, it did.  The Nazi regime was, by then, all but defeated.  He quotes Hal Burton, who wrote that the decision to go forward with a spring, 1945 offensive “epitomized the… compulsiveness that drives generals to commit their troops (when) a share in the victory could be earned more prudently by standing still.”

Nevertheless, Isserman concludes, “Leaving German forces in Italy ‘undefeated in the field’ was simply unacceptable, even unimaginable, to Allied commanders.”

War is often, so it seems, not so much politics by other means, as Carl von Clausewitz put it, as it is politics simply.

In 1946, Charles Minot Dole received a citation from the War Department for his role in recruiting skiers and mountaineers for the 10th Mountain Division.

Ultimately, though, the lasting importance of the 10th Mountain Division lies in its impact on American society rather than in its wartime exploits.

“The 10th Mountain Division was the only unit in the history of the US military to use wartime skills to promote a civilian pastime,” writes Isserman, by which he means, of course, skiing.

Veterans of the 10th Mountain Division created ski areas, ski schools and winter resort towns in Colorado and New England as well as in the Adirondacks.

Like the veteran who founded a national ski magazine or other members of the 10th Mountain Division who promoted skiing in post-war America in other ways, the Adirondack veterans “couldn’t get skiing out of (their) blood.”

And whether it is despite, or because of, the privileged backgrounds of its first recruits, the 10th Mountain Division of the second World War exemplifies a democratic ideal: uncommon people, with uncommon abilities, serving the common good.

That alone would make the 10th Mountain Division worthy of a permanent contribution to the history of America’s war against the Nazis, which “The Winter Army” most certainly is.