A Federal-State Partnership to Save the Adirondacks

Fifty Years after an Adirondack National Park was proposed and rejected, is it time for a more dynamic role for the Federal Government in the Adirondacks? 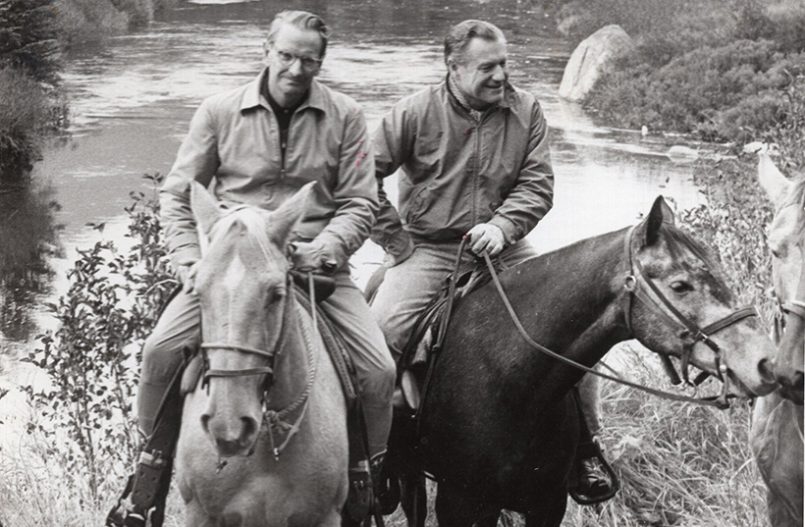 Governor Nelson Rockefeller and his brother Laurance in the Adirondacks in 1965. Two years later, Laurance would propose that a portion of the Adirondacks become a national park. LG Mirror files photo.
By Anthony F. Hall

“We urge  Congress and the President to give consideration to the establishment of an Interstate Park System,” Governor Nelson Rockefeller’s Temporary Study Commission on the Future of the Adirondacks stated in 1970. “We believe the federal government should take a long, careful look at….. more financial aid for the enlargement and improvement of protected lands in our large state parks.”

The new system should be modeled on the Interstate Highway System, the Study Commission suggested, stating, “When highways within a state are linked to the interstate, the federal government pays 90% of the costs of construction. Control remains with the state.”

The Temporary Study Commission’s idea was a good one, and given the state’s inadequate support for the Adirondacks,  perhaps one whose time has come.

The State’s Scarcity of Resources

Every year,  New York State withdraws roughly $300 million from the Environmental Protection Fund to support such initiatives as Lake George’s invasive species prevention programs, the management of recreational pressures on the High Peaks, the New York State Hemlock Wooly Adelgid Initiative at Cornell and the preservation of open space.

But even that sum is not sufficient to meet the Adirondack Park’s needs.

Aaron Mair,  the former president of the Sierra Club who was recently hired by the Adirondack Council to lead its new “Forever Adirondacks Campaign” says  the Adirondack Park must add 2000 new jobs immediately just to sustain its current level of use.

A $3 billion environmental bond act that will appear on the November, 2022 ballot could generate significant funds  for clean water,  jobs and wild land protection in the Adirondacks, as well as infrastructure such as broadband and cell service, says Willie Janeway, executive director of the Adirondack Council.

But perhaps the periodic need for environmental bond acts should be viewed as evidence that New York’s  regular funding streams fail to produce enough revenue to support the park. Federal support may be what is required.

To be sure, there is a federal Land and Water Conservation Fund to support parks and wildlife refuges, but as Peter Bauer, the executive director of Protect the Adirondacks, notes,  the Adirondack Forest Preserve has gained little from the fund, largely because the Adirondack Park has been supported, at least historically,  by New York State.

The members of the Temporary Study Commission qualified their appeal to Washington for funds with a demand that “state control (of the parks) be assured.”

They were aware of the potential risks of opening the Adirondack Park to federal interference and had, in fact, publicly and firmly  oppposed residual proposals to create a National Park in the Adirondacks, first floated by Laurance Rockefeller and US Interior Secretary Stewart Udall in July, 1967. So the Commission’s invitation to the federal government to play a role in the Adirondacks,  however limited a one, is interesting.

A National Park vs. a Regional Planning Board

In January, 1968, Governor Nelson Rockefeller told reporters that his own Conservation Department opposed his brother’s 1967 proposal for a National Park and that as a consequence, he could foresee no “situation that would lead to any rapid action in this direction at all.”

According to the Associated Press, “Rockefeller hailed (his brother’s) report as a productive one and said he would assign a commission to study the future of the Adirondacks and report to the legislature.”

This, so far as I know, is the first public reference to the Temporary Study Commission, whose members’ names would be released over the next few months.

Among the Study Commission’s  tasks, Rockefeller told the assembled reporters, was to determine  “whether there should be any federal participation.”

Before it submitted its final report to the legislature in 1971, the Study Commission did examine the question of what, if any, role the federal government should play in the Adirondack Park, “objectively examining arguments on both sides of the question,” as its report stated.

“After careful consideration, the Commission strongly opposes any federal management of public lands within the Adirondack Park,” the report concluded.

The federal government’s policy of creating National Recreation Areas  had useful attributes but “this management technique emphasizes mass recreation instead of wilderness preservation” and the Temporary Study Commission used its report to reaffirm the significance of wilderness and of the wilderness experience.

“No better method exists to assure continued resource protection than Article XIV, the Forever Wild clause,” the Commission stated. “In this age of environmental concern, what could be more apropriate than a reaffirmation of New York’s unparalleled conservation tradition?”

The Study Commission opposed the creation of an Adirondack  National Park for another reason as well: it would have  included only a portion of the public and private lands within the Blue Line,  and  “the Commission believes that the entire park should be maintained as a single entity. Any other source of action will degrade part or all of the park,” it stated, continuing, “this objective can be attained only through a massive state action program to assure the continued integrity of the Adirondack Park.”

Of the Commission’s 181 recommendations, published in a final report issued in January, 1971, its most significant was the creation of the Adirondack Park Agency, whose authority to regulate land use was supposed  to maintain the ecological and scenic integrity of the park  and its unique identity.

Harold Hochshild, the founder of the Adirondack Museum and the Chairman of the Temporary Study Commission, usually spent  summers at his great camp Eagle Nest in Blue Mountain Lake.

Nevertheless,  the Commission’s mandate to determine whether “there should be any federal participation” in the Adirondacks led him to devote two days in July, 1970 to visiting the Baxter State Park and the Acadia National Park, both in Maine.

At the Acadia National Park, Hochshild would have seen evidence “that many of our National Parks are becoming urbanized, threatening to destroy the very things Americans travel great distances to  enjoy,” to quote from a Commission report.

Hochshild himself concluded: “my visits left me with an enhanced realization how lucky New York is to have the Adirondacks.”

The Commission’s staff  did take favorable notice of at least one federal initiative in Maine: the 92.5-mile long Allagash Wilderness Waterway in the forest of northern Maine. The Land and Water Conservation Fund paid half the costs of protecting the now-iconic paddling route, which in the view of the Temporary Study Commission, was “a striking demonstration of creative federal-state partnership, with the responsibility for administration remaining with the state.”

The Land and Water Conservation Fund

President Lyndon B. Johnson created  the Land and Water Conservation Fund in 1964, at the time he signed into law the National Wilderness Preservation Act. It  remains the single best way to channel funds to state parks, the Adirondack Park included.

Over the years, roughly $7.5 million has been directed toward the Adirondack Park, but that is an extremely small sum compared to what the LWCF leaves with other sections of the country.

Funded with receipts from offshore oil and gas development companies, the LWCF has become a part of the nation’s strategy to mitigate climate change, offsetting carbon emissions linked to fossil fuels by protecting forests and waters.

US Senators Chuck Schumer and Kirsten Gillibrand have been effective advocates for the LWCF, leading the effort during the Trump administration, for example, to make funding for the LWCF permanent and mandatory.

Why not urge them to adopt the Temporary Study Commission’s call to provide more financial aid to state parks by scaling the Land and Water Conservation Fund up to a level sufficient to meet the nation’s current needs – including the need to address climate change?