How to be Instrumental 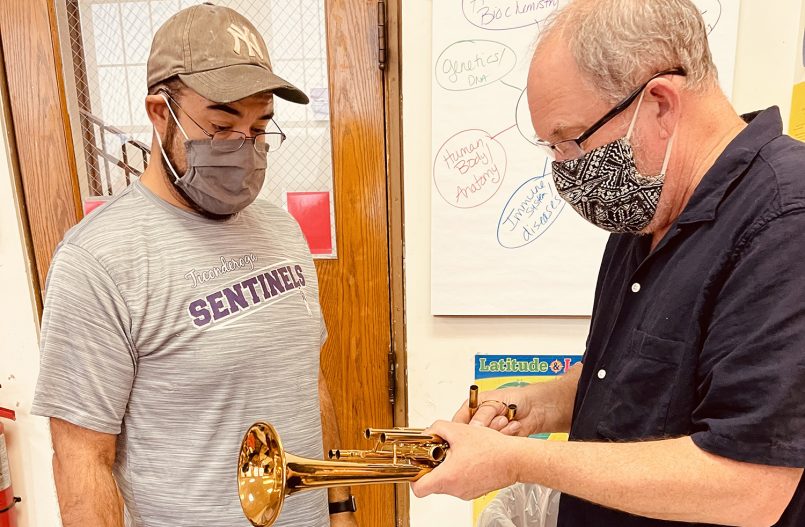 Bill Cole and Ticonderoga Music Director Michael Iturrino at a workshop at Ticonderoga High School to organized to instruct teachers from throughout the Adirondacks in the craft of instrument repair.
By Anthony F. Hall

Music teachers from across the Adirondacks assembled at Ticonderoga High School over the course of two October weekends to hone their skills in repairing and maintaining brass and woodwind instruments, courtesy of an expanding Beinstrumental initiative.

That initiative, a brain child of composer and Skidmore College professor Evan Mack to collect  discarded instruments, to repair and then deliver them to local students,  has become a model for financially-strapped music programs at schools throughout the state.

“These workshops were designed to help teachers maintain their own inventories of instruments,” said Mack, who we reached in Las Vegas, where he was attending the west coast premiere of “The Ghosts of Gatsby,” a new opera of his.

“We’d like to make these workshops annual events,” said Michael Iturrino, Ticonderoga’s music director and president of the Essex County School Music Association. “The more teachers we can train to become music instrument technicians, the more working instruments we can place in kids’ hands.”

Evan Mack hopes the teachers trained in instrument repair and maintenance will pass those skills on to their students.

“If students acquire the know-how from these newly trained band teachers to fix and maintain their instruments, they’ll feel a far greater sense of connection to the instruments,” he said.

October’s workshops were led by Bill Cole, owner of Cole’s Woodwind and Brass Repairs in Saratoga.

“I’ve taught a lot of these programs, but these teachers have had a higher level of dedication than most groups,” said Cole.  “They came with the intention and the desire to learn. That makes a huge difference.”

The workshops were made possible with financial support from the Ticonderoga Festival Guild and the Adirondack Foundation.

The Festival Guild has supported Beinstrumental almost since its inception, when it paid for the repair of  seven urgently needed instruments collected during Macks’s 2020 drive to collect used instruments.

“The instrument drive was my idea, but the Ticonderoga Festival Guild fully embraced it and became our financial sponsor,” said Mack, noting that the guild has secured grants from the Adirondack Foundation, the Cloudsplitter Foundation, the International Paper Foundation, the Essex County Arts Council and the Charles R. Wood Foundation.

The Ticonderoga Festival Guild has also sustained the drive, collecting instruments from Silver Bay to Dannemora for schools throughout the Adirondack and North Country regions.

According to Madie O’Toole of the Festival Guild, the organization will continue to accept donated instruments throughout the fall.

When Evan and Kristin Mack enrolled their children in elementary school in Ticonderoga in 2019,  they discovered something that would be of concern to any parent.

As reported by their son Carter, the instruments owned by the school’s music programs were old, some dating back to the 1920s and as old as the high school building itself.

“The school has a great music program, so I wondered why that was the case. I reached out to the director, Mike Iturrino, who explained to me that the school district simply didn’t have the resources to replace the instruments. I thought I could help,” said Evan Mack.

Iturrino himself has vivid memories of his first conversations with Mack.

“When Evan saw that our instruments were more or less held together, to the best of our ability, by  paper clips and duct tape, he jumped into action,” said Iturrino.

As a composer and professor of music at Skidmore College in Saratoga, Mack felt he was in a position to help, and he decided to do so.

“My wife, Dr. Kristin Mack,  is the town’s family doctor, having joined Hudson Headwaters Health Network in July, 2019. We’re part of the community. And that means helping out along the way,” said Mack.

“Evan came up with an incredibly creative solution to our problem,” said Iturrino. “He proposed a campaign to solicit donations  of gently-used instruments.”

In response to Mack’s appeal, Skidmore students, faculty and staff, as well as local residents,  donated  their “gently used instruments” to the instrument drive. It netted 70 instruments, worth roughly $35,000.

Bill Cole, “generously offered to donate his  time to inspect the instruments for condition; that evolved into his active participation in the cleaning and the time-consuming repairs of instruments,” said Mack.

“Everything happens for a reason. We have to embrace those opportunities when they arise,” said Cole. “I agreed to look over some instruments and three years later, we now have several workshops under our belts and lots of instruments repaired. Beinstrumental has turned into a wonderful thing.”

As enthusiasm for Beinstrumental grew, a program was also created to send a Ticonderoga High School senior to  learn the craft of instrument repair from Bill Cole at his shop in Saratoga.

“Any instruments the student  fixed, Ticonderoga was to be given them,  at no cost for the repairs,” said Mack.

The training program stalled because of COVID-19, but according to Bill Cole, the student (who has since graduated) has resumed his apprenticeship.

“Our goal is to provide him with the education he would need to open his own instrument repair shop,” said

What a Good Instrument Can Do

“It’s incredible what the Ticonderoga Central Schools’ music programs were doing with limited resources,” said Mack. “But a little bit of help can  go a long way. If someone can make a better sound with a better instrument, that could be the spark that keeps them going.”

According to Iturrino, that is precisely what has occurred at Ticonderoga High School.

“I have a student who’s a fantastic trumpet player, whose instrument was not the greatest. Someone donated a brand new $3,600 trumpet and when I presented it to her, she began weeping. That moment was among the highlights of my career. She’s now auditioning for admission to the Crane School of Music at SUNY Potsdam,” said Iturrino.

More Instruments On Their Way

According to both Iturrino and Mack, as many as fifty more instruments are on the way to local schools.

Barcone’s Music, a multi-generational instrument repair shop in Kingston NY, is  closing and liquidating its stock of rental instruments.

Those are being purchased at discounted prices for local schools and the shop is donating repair supplies and instructional material.

Moreover, a Long Island shop is donating instruments that it can no longer rent.