Works and Days: Tending to Bees, a Household and the Environment 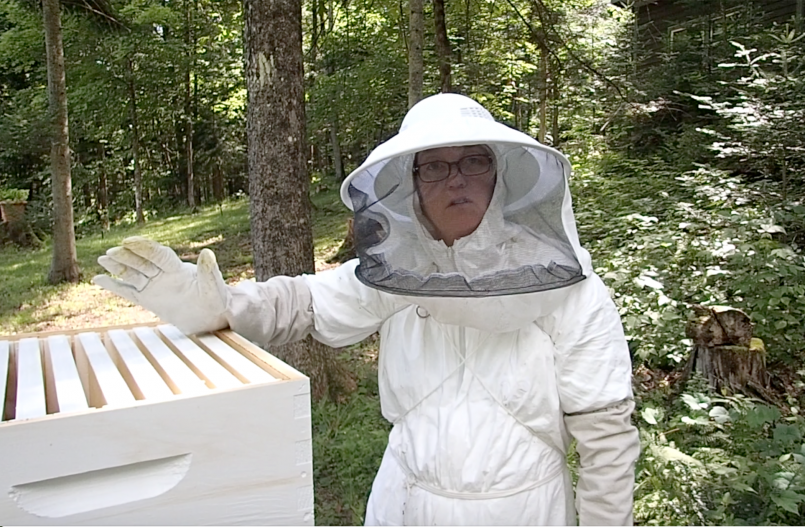 Laura Von Rosk, an artist and curator,  and her husband, Dr. Sam Bowser, a research scientist specializing in the physiological ecology and evolution of single-cell organisms, have more than enough interests and accomplishments for an extended family of brilliant achievers, let alone one couple.

(They became a couple after spending eight weeks together in Antarctica, on a scientific expedition led by Bowser, on which Von Rosk served as artist-in-residence.)

Nevertheless, the couple now has claim upon another distinction: successful bee keepers.

“It opens up a whole other universe; when you open a beehive, you’re living in the present moment. You’re not distracted by anything else. That experience can shape how you see yourself and your relationship to the natural world,”  said Von Rosk.

The couple, who have a house nestled among woods, wetlands and fields near Schroon Lake, keep goats, tap maple trees and are starting to grow hops, in addition to keeping bees.

“We have a friend who says he has a stack of books on bees and bee keeping taller than he is. But the books are not of that much use to the bee keeper because the bees haven’t read them,”  said Bowser.

“There’s a certain amount of stochastic behavior among bees,” Bowser explains, meaning that their ways can be influenced by any number of random variables, despite the fact that they’re genetically determined to act as a single organism, together and even alone, when out of the hive retrieving sugar, for instance.

“Each hive has its own temperament,” said Von Rosk. “The hives may have different coloring.”

We visited Laura and Sam at the start of  National Pollinator Week, which is promoted in this region by something called the Adirondack Pollinator Project, a collaborative effort of AdkAction in partnership with The Wild Center, The Lake Placid Land Conservancy, and Paul Smith’s College.

The Project’s mission, its founders stated in a recent press release, is “to highlight the critical importance of pollinators to biodiversity, food availability and the economy,  to protect their habitat and to inspire individual and collective action to help pollinators thrive.”

“If we can inspire one person who may have been daydreaming about keeping bees to get started, we would cobsider that a success, because we need more pollinators,” said Von Rosk. “It’s astonishing to learn that 50 to 60% of our food relies upon honeybees.”

Von Rosk said her goal is to make their property “more pollinator-friendly” by reducing the amount of lawn and by planting more vegetation – including native wild flowers – that provide pollinators with nourishment, rather than the horticultural equivalent of junk food.

This is especially important these days. As more fields hosting native plants and trees are plowed under, the numbers of even more bees, butterflies, birds and other are diminished.

The threats to honeybees, whether managed or wild,  arenumerous:  invasive species, pesticides, lack of wild forage, parasites and disease.

A decline in the honeybee population will be noticable in orchards, gardens and backyards, all of which depend upon pollination.

Laura brought a knowledge of and interest in bee keeping to the marriage, having taught herself the art in the mid-10990s, living on a friend’s farm in Woodstock, NY.

They’ve been keeping bees in Schroon Lake since 2017.

“We’re still newbees,” said punster Bowser.  “But we have learned that bees are livestock. You have to care for them and keep them healthy. But if you do it properly, you’ll benefit the environment. And you’ll get some honey.”