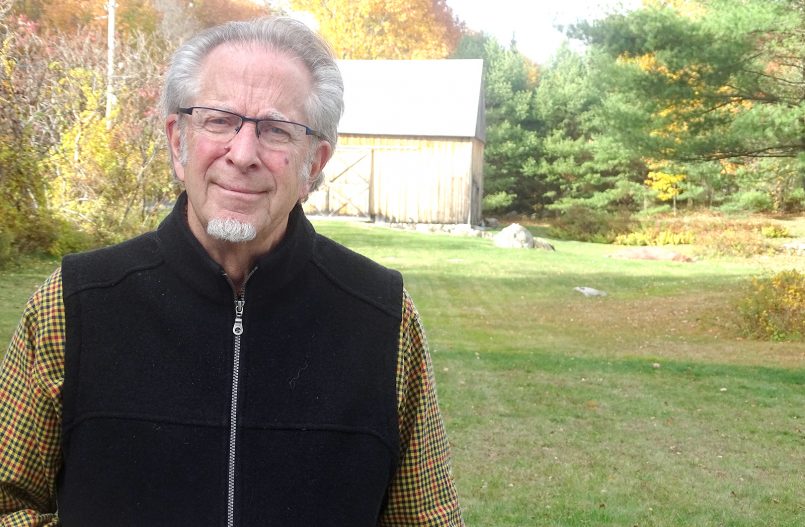 Between the downing of Franklin County’s last indigenous moose and the creation of the Adirondack Park Agency, fewer than one hundred years elapsed.

Within that time, electricity came to the Adirondacks, as did bootleggers, men and women dying of TB, rafters, draft dodgers, scholars, writers and artists – not necessarily in that order.

The writers included Christopher Shaw, a Bard College dropout who was among the cluster of young people who settled in and around the hamlet of Stony Creek in the late 1960s and early 70s.

Recently retired from Middlebury College after a career that included editing Adirondack Life magazine, he’s written a novel, “The Power Line,” which distills those decades into engaging, expertly wrought fiction.

” ‘The Power Line’ reflects contributions from numerous sources,” Shaw is quoted in a press release. “I’m happy that in retirement I could give these materials their due. I hope they open a window for readers into a little understood period of transition in northern New York.”

Shaw must be a modest fellow. Our regional history breathes through his characters, especially that “little understood period of transition,” in which, as one character says, “it was like we’d come to the end of something. But we didn’t know what it was exactly. Like we’d never know the woods the way our fathers had.”

Living in the Adirondacks in his twenties, Shaw had some sixth sense that the senior citizens living on hill farms, working horses in the woods or drinking away an afternoon at the Stony Creek Inn were anachronisms, people whose way of life was already passing beyond his grasp.

In “The Power Line,” Shaw reimagines his younger self as Abel St. Martin, a journalist who decides to record the memories of old people around Saranac Lake and “Lake Aurora.”

“Abel is the guy I was in the 1970s, listening to these men, guys who had been born in the 1890s, talking about their lives, for whom reality was a different place,” Shaw said in a recent interview. “I could see that something on its way out was hanging on into my time, and that I had direct access to it. Unlike Abel, though, I never got around to recording those conversations.”

“Lake Aurora,” by the way, is a composite of every Adirondack lake hamlet you have ever known, but set “in the scrub barrens and lakes of the northern Adirondacks, where the central plateau of the High Peaks declined northward to the St. Lawrence, and glacial eskers wormed over the sand plains and spruce bogs.”

“I had to fictionalize the landscape a bit,” said Shaw. “So somewhere near Lake Clear or the Upper Saranac is Lake Aurora, a village that doesn’t exist. Right next to Neverland. And by fictionalizing a landscape, you acquire a little more freedom to fictionalize characters. And the novel is the characters.”

In the novel, Abel’s interlocutors often refer obliquely to a shoot-out between feuding bootleggers near the road from Saranac Lake to Gabriels, but none seem to know the details. His lover, Sonja Germaine, confides that old-timer Lonnie Monroe, who grew up in Lake Aurora, knew all about the incident, and about her grandfather, Fran Germaine, a noted fiddler and rustic builder. So begin Abel’s interviews with Lonnie Monroe.

Monroe’s account includes the numerous adventures he and Germaine shared, from working for Paul Smith’s electric company and the gangster Legs Diamond, to Mexico and Montreal, from which they escaped, after one particularly violent escapade, across the St. Lawrence in the depths of winter by canoe.

Monroe, it emerges, is the perfect guide for Abel’s journey into the Adirondack past.

In addition to having witnessed events first-hand, he is a first class noticer, as all good woodsmen must be.

As Monroe himself says, every Adirondack native learns  “to take in the ground for himself and plot his own action. That’s the only thing any one of us has got to go on, ever.”

(He concludes, “You can’t depend upon anyone else’s say-so,” a truism he affirms time and again through his unreliable narratives.)

Moreover, Monroe, like Abel St. Martin, is one of those people who have a tendency to slip into that fugue-like state where time past, time present and time future are interchangeable: “It was queer to feel the earth shifting under your feet… like everything you’d known and believed had already survived past its time, and the world had moved on without you.” Or: “Paul Smith’s Hotel, with all the porches, turrets, balconies and fancy trim seemed to fade and turn into a pile of dust while I watched.”

Christopher Shaw is also a first class noticer, as you will find when reading his observations of the Adirondack landscape, buried in the interstices of the novel’s action: “Spring was really busting out… Far off you could see the sun reflecting off the slides on Whiteface, where the ice evaporated and melted and the haze starting to gather around the peaks, and there were robins and flickers in the bare, brown meadows along the power line we had started cutting last fall.” Or in a simple description of ice-out: “it wouldn’t be that long before the whole grey sheet blew away and disappeared, and you’d be able to catch a big laker from the shore…”

However unobtrusive the novel’s descriptive passages, the Adirondack landscape is an essential element of “The Power Line.”

“A landscape transmits its energy through human experience,” says Shaw.

The descriptions of a familiar landscape make “The Powerline” a joy to read.  So, too, does the breadth of the novel’s historical reach.

“The Power Line” compresses social history (great camps, hotels, sports and guides, the erotically charged cure cottages and sanitariums); it features a gallery of historical characters: (Theodore Roosevelt, Paul Smith, Edward Livingston Trudeau, Legs Diamond, Bob Marshall, Art Pratt, Noah John Rondeau, Rockwell Kent, Jacques Suzanne); it footnotes economic history (the development of hydroelectric power, purportedly for flood control, but in reality, to supply local industries with cheap power, to the detriment of the Forest Preserve); and limns the political history of the Adirondack Park (from the origins of an environmental ethic to the sometimes violent battles over land use regulation.)

From these same pages, an attentive reader could, in all likelihood, compile a playlist of Adirondack folk tunes, many of which shaped the sound and sensibility of the Stony Creek Band, which makes a cameo appearance here.

This is not to suggest that “The Power Line” is a historical novel, as that category of fiction is commonly understood.

“I didn’t research the novel’s historical details. It was stuff I just absorbed; and like any writer of fiction, I imagined what people might have been doing, given the time and their circumstances,” says Shaw.

It is, however, shaped by the awareness of the ways in which changes to a wild and once remote landscape will change the way people see, think and feel.

“When you start connecting with the outside world, with interstates, railroads or even telegraph wires, among other things, space and time is reconfigured. The distance between places is reconfigured. The landscape is reconfigured. The mental map begins to shift. The older connections between people and place disappear. The coming of electricity seemed to me to be as good a way as any to show how that shift in mental and emotional paradigms can get its start,” said Shaw.

“The Powerline” is built upon the insights of men like Lonnie Monroe and Abel St. Martin, who, midstream in time, as it were, stand aside, to experience with a physical immediacy the past even as they perceive, however dimly, what is to come.

They speak through Chris Shaw and the rare gifts of a writer in peak form.