Winslow Homer at The Met: The Adirondacks and the World 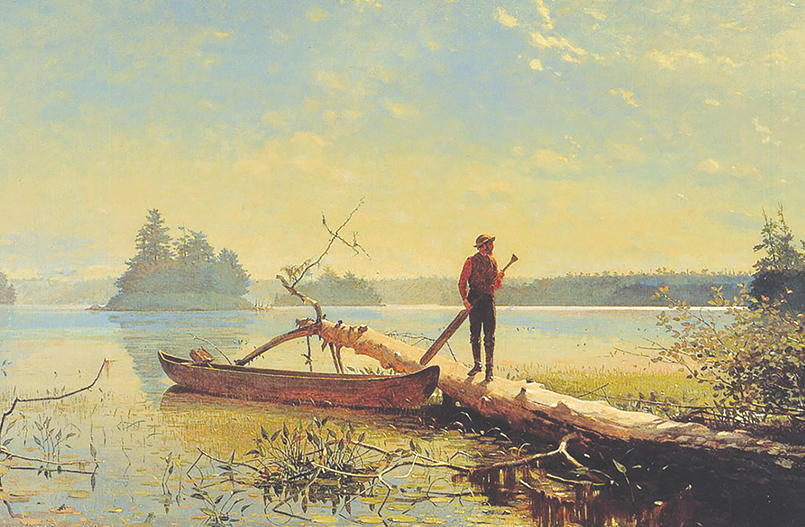 An Adirondack Lake, 1870. University of Washington.
By Anthony F. Hall

America’s relative decline as a world power can be felt not only in a recalibrated balance of power. The art world feels it too. For much of the twentieth century, Winslow Homer was regarded as the quintessential painter of American life.  It is unlikely that the reputation of an artist so closely associated with the American Century could survive its end unscathed.  Not uncoincidentally, a new exhibition at the Metropolitan Museum of Art, “Winslow Homer: Crosscurrents,” positions Homer as artist of the pan-global, of a post-hegemonic world. In this critical reassessment, Homer is an artist preoccupied not by “the least pictorial features of the least pictorial range of scenery and civilization,” as Henry James famously complained in an 1875 review, but by the open sea, the unspoiled tropics and the remote north.

For those of us living in the Adirondacks, Homer’s paintings from the Northwoods Club and Keene Valley have made us intimates of his guides, anglers, trappers, sports, loggers and river drivers – how could it be otherwise? Several of these paintings are in “Crosscurrents” and we cannot help but wonder where their subjects stand after this reappraisal. Or if. Viewed in the exhibit’s “sociopolitical framework centered on race, politics, and environmentalism” these Adirondack paintings are not so much problematic as irrelevant.

One might have hoped that the Adirondack paintings, with their overt interest in the unsettled and unsettling relationship between man and nature, would be a point of departure for a conversation about Homer’s “environmentalism.” If so, one would be disappointed.

Inaccuracies abound in the wall labels and catalogue essays. In the one essay in which the Adirondack works are discussed, for instance, Homer’s 1892 painting “Hudson River” is said to be set not in the Adirondacks but “elsewhere in upstate New York.” In point of fact, the Northwoods Club’s Mink Pond, (seen in “An Adirondack Lake”) falls directly through a cataract into the Hudson, which skirts the club’s boundaries within a mile of the private preserve.

More important than the river’s proximity to the Northwoods Club is its place in Homer’s vision of the Adirondacks; it is not at the periphery, but at its center.

As historian Phil Terrie points out, “Without the Hudson there is no Adirondack Forest Preserve or Park, and without a protected forest in the Adirondacks, there is no viable Hudson River.”

When Homer was visiting the region in the early 1870s, surveyor Verplanck Colvin was warning state legislators – with increasing urgency – that drought and flooding would alternately plague the Hudson for decades to come if the timber companies continued to destroy the “vast tracts of forests in the wilderness.”

In 1894, two years after Homer completed “Hudson River” the state adopted the “Forever Wild” amendment prohibiting the logging of state-owned forest lands within the Adirondack Park.

A more extensive though not necessarily superior discussion of Homer’s Adirondacks can be found in a new biography of the artist, “Winslow Homer: American Passage,” whose release was timed to coincide with the opening of the show at the Met.

The Adirondacks, writes William Cross, was “Homer’s slice of wilderness. He showed it as it was: altered and ugly, the mountains transformed by man. He dared to paint the wounded land: the clear-cut old-growth forests, the merciless killing of graceful animals…”

It is doubtful that Homer intended the works to be polemics, or that his views were so dogmatic.

What appears to Cross as a landscape “altered and ugly” in “Burnt Mountain” (1870) for instance, is probably the aftermath of the wildfire that swept across the tract in 1867. Homer would have known that fires and storms are sources of a forest’s regeneration and that within a century, the tall timber would have returned. Nature, he knew, is dynamic.

As a painter, what was first for Homer was what he saw, not what he felt about what he saw, something less sophisticated observers have often appreciated about his work. Reporting on the Met’s 1959 exhibition of Homer’s paintings, for instance, the editor of The North Creek News-Enterprise wrote: “His river pictures show the upper Hudson with the banks lined with logs, as all old-time residents remember. He also caught the spirit of old-time hunting. Dogs were considered essential to the sport. The old Adirondack deerhound has now disappeared, except in the Homer pictures where they will always remain watchful and ready for the long chase.”

The Adirondacks and the World

In “Winslow Homer: Crosscurrents,” the Adirondack paintings are relegated to the background as the curators “foreground the watercolor paintings of the Atlantic world… challenging the popular conception of Homer as the ‘Yankee’ realist who painted mostly Northeastern subjects.” But rather than being dismissed, these Adirondack paintings could, just as easily, have been illuminated by an interpretation that “situates Homer’s work in the Atlantic world, a diasporic concept linked to the geographical region along the Gulf Stream from the Caribbean up the East Coast of the United States and across the ocean to Great Britain.”

To return to our discussion of the Hudson River and its place in Homer’s work: the river is the connection between the Great North Woods and the wider world or global marketplace, delivering Adirondack products to the cities “down below” and ultimately, in some form or another, abroad.

And not just forest products. The trapper in the 1870 “An Adirondack Lake” (and it is a trapper, not a “local hunter-woodsman-guide,” as the wall label asserts) who is shown viewing something in the distance could be said to be gazing into the past, when the Adirondack region was among the so-called peltries of North America, a source of the beaver fur exported to Britain.

But the Hudson is a vector not only of commodities; one might think of it, metaphorically at least, as a conduit for the ideas that have changed the way we think about wilderness and our relationship to it.

The Adirondack Park is the birthplace of modern environmentalism – and not just because of the state constitution’s early and far-sighted protection of the Adirondack wilderness, which, among other things, served as the model for the 1964 law establishing a national wilderness preservation system.

The Adirondacks have also exercised a powerful influence upon the writers and artists who fueled the environmental movement and upon whom, as Bill McKibben says, “the movement continues to draw.”

One would have thought that a relationship between the Adirondacks and an environmental movement that is, by now, truly international, would have been impossible to ignore.