When You Get to the Top of the Mountain, Offer a Helping Hand 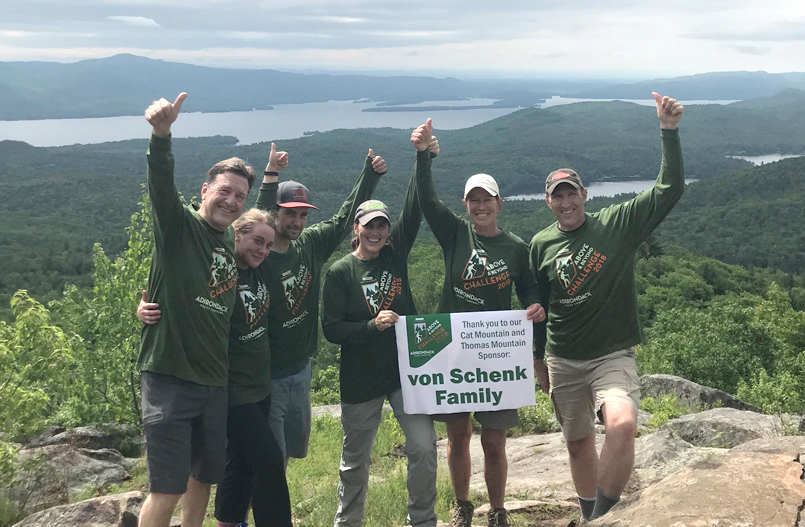 The Von Schenk family on Cat Mountain in Bolton. Allison King, in whose memory Steve Von Schenk hiked the Adirondacks’ 10 mountain Great Range in one day in August, is second from left.
By Anthony F. Hall

With a relatively simple idea, and within a relatively short period of time, von Schenk and his wife Carolyn  have raised more than $130,000 to help address the problem in this region.

Two years ago, the couple launched the Above and Beyond Challenge to benefit  the Addiction Medicine Program at Saratoga Hospital’s  Community Health Center.

As von Schenk explained in an interview at the Adirondack Trust Company’s headquarters in Saratoga Springs,  the Challenge is a  hiking program for recovering addicts, their families and friends, but one that is neither regimented nor mandatory, whose therapy is no more clinical than group  rambles up Adirondack nopits, cobbles and peaks, whose counselor is no one but wild nature itself.

“Carolyn and I are 46ers; we really love hiking the Adirondacks,” he said.  “So we thought that we might be able to use the Adirondacks to help heal people, while, at the same time, raising awareness of and funds for Saratoga Hospital’s Addiction Medicine Program.”

Von Schenk said he and Carolyn chose to support  Saratoga Hospital’s Addiction Medicine Program because “it treats addiction as a disease, not as a moral failing. It serves people in recovery who need ongoing counseling and treatment.”

It therefore aligns nicely with the mission of their Above and Beyond Challenge.

Out-of-doors, those joining the hikes are “nothing more nor less than hikers. They’re not defined by addiction or even identified as addicts. They’re not sitting in a circle discussing issues or feelings, they’re just experiencing the healing beauty of the Adirondacks,” said von Schenk.

“Some may not have hiked in some time. They may find it rough going. But at the summit, they can say, ‘this is unbelievable; this is magical.’ And that’s what the road to recovery is like. It’s hard work, but what a pay-off,” said von Schenk.

“The sponsor chooses a peak and when we reach the summit, we unfurl a banner thanking the donor, which we photograph and spread across the various social media platforms,” said von Schenk. “It’s a way to raise money for a charitable cause that’s unlike the usual gala or golf outing.”

As the founders of the Challenge, the von Schenks have also contributed significant sums.

“Our Challenge was meant to reinforce these kinds of spiritual, healthy, holistic  approaches toward addiction and recovery,” said von Schenk. “It was meant to affirm the historical relationship between the Adirondacks and the pursuit of physical, spiritual and mental health.”

Since the program’s inception, more than one hundred individuals have participated in one or more hikes.

This past August, von Schenk decided to raise funds for the Addiction Medicine Program by adopting a challenge of his own:  hiking the 25 mile, ten mountain Great Range of the Adirondacks in one day.

Labeled “one of the toughest” one day hikes in the US by  Backpacker Magazine,  the Great Range comprises eight peaks that rise higher than 4,000 feet and includes the state’s highest: Mount Marcy.

The hike terminates at Adirondack Loj, seven miles from the summit  of Marcy.

On August 15, Von Schenk arrived at the lodge  at 9:30 pm, 17 and a half hours after he left the trail head in Keene Valley.

By soliciting pledges from individuals, von Schenk raised an additional $25,000 for the Above and Beyond Challenge.

The hike was meaningful for von Schenk in part because it was his second attempt.

The year previous, von Schenk and his eldest son Paul made a valiant effort, but left too late in the day (albeit at 5:30 am) to summit all ten peaks within the 24 hour period.

“This year, Paul was expecting his third child, so I did the hike solo. Learning from past experience, I started at 2:00 am,” he said.

But this year’s hike was also meaningful because it was dedicated to the memory of Allison King, the fiancée of von Schenk’s middle son, Brian.

“On October 6, 2018, my son Brian’s fiancée, Allison (Allie) King, 31, died tragically. She was a strong supporter of the Challenge, joining us on several hikes last year, and was a part of our family. Her spirit guided me as I rose at 1 a.m. the morning of the hike, and as I summitted all 10 peaks over the course of the day,” von Schenk wrote to friends and supporters.

Allison King was one of four sisters who lost their lives in the horrific October 2018 limousine accident in Schoharie, NY.

“I reached the Summit of Marcy at 4:30 pm,” von Schenk says of his August 15 hike. “Allie was with me the whole way. I felt her presence. When I was on the top of Marcy, she was there. She had moved me along.”

For more information about the Above and Beyond Challenge, visit its website, aboveandbeyondchallenge.org.