Vincent Schaefer’s Modest Proposal: The Adirondack Park as a Sanctuary from Air Pollution

May 11, 2020
Share Tweet
Vincent Schaefer’s Modest Proposal: The Adirondack Park as a Sanctuary from Air Pollution May 11, 2020 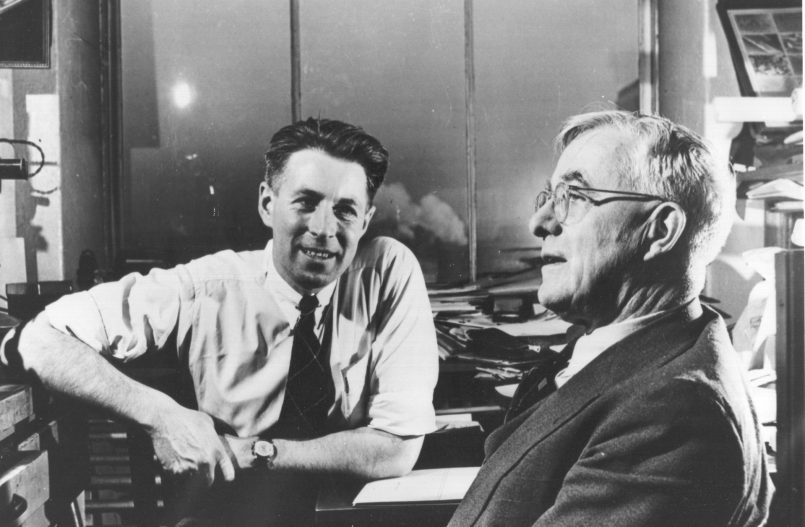 Fifty years ago this August, Governor Nelson Rockefeller’s Temporary Study Commission on the Future of the Adirondacks met at Eagle Nest, the great camp of its chairman, Harold Hochshild.

Members brought their spouses, and it seems as though the gathering was a long, country house weekend as much as it was an official meeting. There was horseback riding, water skiing and tours of the nearby Adirondack Museum, which Hochshild had created and which he subsidized until his death in 1981.  And, no doubt, cocktails at the violet hour on the veranda.

Experts advising the Commission were invited to present talks on topics related to its work – protecting the Adirondacks from suburban sprawl, over-use and threats to the Forest Preserve.  Among those experts was Vincent Schaefer.

Schaefer, of course, is best known as the assistant of Dr. Irving Langmuir, the prominent Lake George conservationist and the first industrial scientist to become a Nobel Laureate.

Lacking the credential of a graduate or even a bachelor’s degree, Schaefer nevertheless had pride of place among the eccentric but brilliant General Electric researchers assisting Langmuir with his most famous experiments – making better clouds – that is, clouds that could release rain or snow at will.

(The group included Bernard Vonnegut, novelist Kurt Vonnegut’s brother, and Katherine Blodgett, the first woman ever to receive a PhD from Cambridge University in physics and the first woman with a PhD to work at the GE Research Laboratory in Schenectady.)

By 1970, Schaefer had left GE and was working at SUNY Albany as the director of its Atmospheric Sciences Research Center.

As someone who had grown up in the Adirondacks, Schaefer was anxious to see the Adirondack Park preserved as “a unique environmental entity.”

“To an increasing degree, those who seek the solace of this region will greatly increase in number. Care should be exercised now to control this new invasion…” he said. (His talk was later printed and distributed to the Study Commission’s members and staff. It can no doubt be found in the collections of papers at the Adirondack Museum.)

The title of Schaefer’s talk was “The Adirondacks as a Sanctuary from Pollution,” and as an atmospheric scientist, he was especially interested in air pollution.

“Few of the villages within the Park produce serious air pollution except where dumps, mills and auto traffic are dominant and offending factors… the much more serious air pollution problem confronting the Adirondacks relates to air pollution coming from a distance, beyond the borders of New York State. Only stringent laws and regulations at the federal level are likely to improve this situation,” Schaefer said.

(The contribution of fossil fuels to air pollution had been a matter of concern to the New York State legislature since the early 60s,  thanks in large part to the leadership  of Watson Pomeroy, Chairman of the Joint Legislative Committee on Natural Resources and another powerful advocate for the protection of the Adirondacks.)

Assuming “stringent laws and regulations at the federal level” were adopted and enforced, the Adirondack Park would remain a sanctuary from air pollution largely because of its forests.

“Trees are the essential element in protection from pollution … the particulates and gasses of air pollution are filtered out by the fine structure of deciduous leaves and evergreen needles,” Schaefer said.

Recalling that Dr. Edward Livingston Trudeau had surmised that “evergreen forests have a powerful purifying effect upon the surrounding atmosphere” and had stressed “the importance of preserving our evergreen forests,” Schaefer said, “a tree – even a dead one – is more important where it has grown or died than at any other location. There are other parts of the United States far better suited to growing cellulose and related wood products than the Adirondacks.”

The Temporary Study Commission submitted its final report to Governor Rockefeller in January, 1971.

A regional agency that would regulate private land use, was, of course, the most important of its 181 recommendations.

That was among its more far sighted conclusions. If “wilderness holds answers to questions we have not yet learned to ask,” as the late Gary Randorf used to say, Vincent Schaefer’s argument that the Forest Preserve functioned as “an efficient filter for air” was a prescient one.

We now know that the Adirondack Park’s forests also inhale and sequester the heat-trapping carbon that contributes to climate change.

According Colin Beier, a professor of Forests and Natural Resources Management at SUNY ESF, 15% of the annual emissions of carbon from fossil fuels is already offset by American forest lands.

“Natural carbon sinks are natural climate solutions,” he says. “Forests are among our most efficient and cost effective means of reducing greenhouse gas emissions and stabilizing atmospheric carbon dioxide levels.”

With 2.6 million acres of constitutionally-protected forest preserve lands in the Adirondacks, New York is better situated than most states to utilize its forests to reduce its carbon footprint.

It is one more argument – if any more arguments are needed – to present in defense of wilderness and its value to us.