The Origins of Rockwell Kent 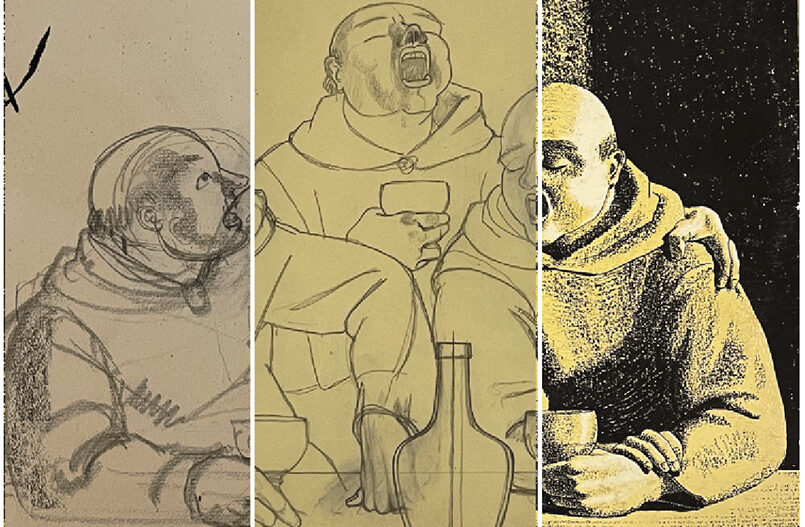 The evolution of Kent’s illustration for a recording of Carl Orff’s “Carmina Burana.”
By Anthony F. Hall

Rockwell Kent, the artist who made the Adirondacks his home from 1928 until his death in 1971, mastered more media than any of his contemporaries, even if one were to include Andy Warhol. And no one was more skillful than he at agitprop – exhorting the masses to political action through expressive combinations of images and words, in posters, pamphlets, books and even bottle caps, those he used to seal the milk bottles from his Ausable Forks dairy farm.

How one medium elides into another is among the questions posed by “Origins: The Development of an Artist and His Craft,” a temporary exhibition of work by Kent at SUNY Plattsburgh, curated by Scott Ferris, arguably the nation’s foremost Kent scholar.

According to a press release from SUNY Plattsburgh, “visitors will see paintings — Kent’s first love — as well as drawings, prints, fabrics, dinnerware, and books. There are also examples of what he called his “potboiler” work — commercial commissions, which supported his travels and Asgaard, his dairy farm.”

Drawing upon the university’s own Rockwell Kent Collection, perhaps the most comprehensive collection of the artist’s work anywhere in the world, and which he himself helped catalog as an undergraduate in the 1970s, Ferris demonstrates, implicitly at least, that Kent was not only versatile but consistently and continuously original. He was never less than anything but himself, even in his so-called “potboiler” work.  Which is not to stay that Kent was unresponsive to new ideas and influences, or that his work remained static.

The Evolution of an Artist

Ferris himself is especially interested not only in how Kent’s work developed across media but in time, from youth to old age.

“His artwork did vary; it did evolve,” Ferris said in an interview. “If SUNY Plattsburgh’s collection held a stronger selection of early paintings, that would be made very clear.”

To help make that argument, Ferris includes some work from other collections, among them, an early painting of Monhegan Island, Maine, which he borrowed from Jamie Wyeth.

“Origins” does include an early drawing that Ferris pairs with a study that Kent executed as a student in New York when he worked with Robert Henri, and then with a still later drawing, a portrait of one of his daughters.

“The contrasts help us to understand Kent’s development as an artist,” said Ferris.

According to Ferris, Kent learned to adapt his art to commerce, from advertisements and Christmas cards to women’s accessories and household china.

“That’s a different form of evolution,” said Ferris. “It’s a process of thinking about your artwork and applying it to a new and different end result.”

“Origins” also includes, to cite another example from the exhibition, cartoons that became the basis of a series of matched china sets titled “Our America,” for which Kent rendered iconic images identified with the nation’s various regions.

According to Ferris, SUNY Plattsburgh not only has a large collection of the china, but of the cartoons upon which the series was based.

Commissioned by a California manufacturer following Franklin D. Roosevelt’s election to a second term, Kent’s china is a visual counterpart to the American Guide Series, a group of books commissioned by the Federal Writers’ Project in 1937 which introduced readers to states other than their own. Perhaps that was the intention of the series’ founders, young Ivy League graduates recruited by the New Deal’s Brain Trust: to acquaint Americans with one another, to bring the citizens of the far-flung states closer together. Surely that was a political project of the New Deal; otherwise, the bonds necessary to gird so many new national programs and policies would have been difficult to forge. The fact that privately owned commercial enterprises sought to capitalize on those policies, or at least on the sentiments underlying them, attests to their popular appeal. And the fact that Kent accepted the commission from the manufacturer is, perhaps, a testament to his regard for the New Deal, however much he might have viewed it as a somewhat tepid response to the social injustice he spent his life combatting.

For Kent, visual disciplines, such as drawing, painting, sculpture, were closely intertwined,

just as they were for his near Adirondack neighbor sculptor David Smith, whose first New York exhibition, which opened in 1938, was attended by Kent.

For proof, if proof were needed, one need only look at a sketch Kent made of his third wife, Sally Johnstone, a painting utilizing the same profile and a brochure for the National Christian Association, which also incorporates the image.

Or consider the drawings that would become the cover of a mid-1950s recording of Carl Orff’s Carmina Burana, a piece based on medieval poems celebrating wine, women and song. Ferris deploys basic sketches, more detailed drawings and finally the cartoon that Kent sent to the printer to illustrate the various stages of the artistic process.

Perhaps ironically for an artist as distinctive as Kent himself was, he concluded that “art is not art until it has effaced itself.” (And with it, presumably, the artist himself.)

As Ferris wrote in the catalog for “The View from Asgaard,” the 1999 exhibition he co-curated at the Adirondack Museum in Blue Mountain Lake, “little has been written about Kent’s conceptual foundations.”

However much Kent may have depended upon his teachers – William Merritt Chase, Robert Henri, Abbot Thayer – for the evolution of his technique, it was a dynamic engagement with the world, with labor, travel, literature, music and politics, that made Kent the artist that he ultimately became, Ferris writes.

That engagement is on compelling and persuasive display in “Origins: The Development of an Artist and His Craft,” which will remain on view through August 23, 2023.

The Rockwell Kent Gallery is located in the Feinberg Gallery on the campus of SUNY Plattsburgh. For information, call 518-564-2474.