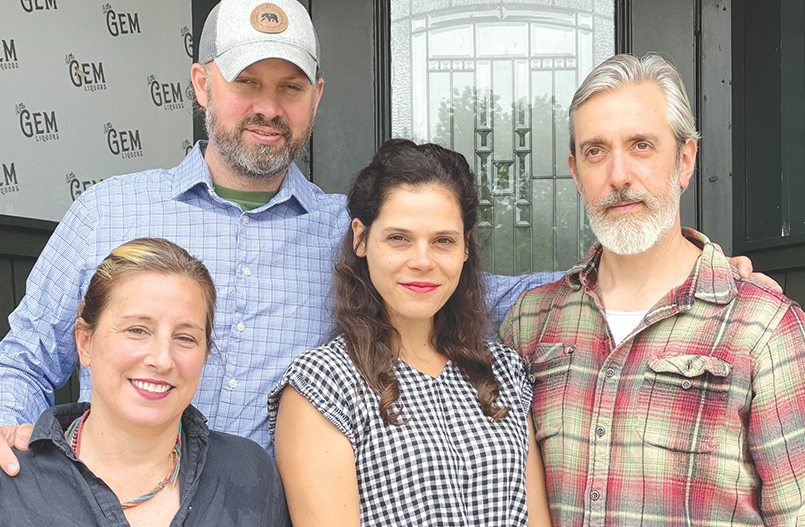 It’s no secret that the past two years have been trying for the global hospitality industry, but there are signs of recovery underfoot, and the arrival of 2022 brings the promise of new restaurant openings including the much anticipated The Gem in Bolton Landing on June 21st. “People have been stopping in every day for the past few weeks asking when we will open,” Paty Bocato said.  “Some have driven over an hour-and-a-half to get here.”

Paty Bocato is one of the owners along with her world-famous mixologist husband Richard Bocato and the husband/wife team of Kirby and Kristan Farmer.

“We’ll open the doors on June 21 with an abbreviated menu and will offer our full menu the following week,” Paty said.

The two couples are equally renowned in the hospitality industry and have been frequently profiled in food, design and lifestyle magazines.  Needless to say, they are no strangers to owning and operating restaurants.  Between the two partner families they currently have five other hospitality businesses.

In 2013 the Farmers bought and renovated an historic building in Hudson, NY.  In 2009 Richard Bocato and partner Sasha Petraske staked their cocktail fame in the comparatively uncharted terrain of Long Island City with Dutch Kills. The 1890s style saloon and cocktail bar became a magnet for New York’s dedicated imbibers.

The two couples purchased the Sagamore Pub back in September of 2020.  “We took our time getting this place just the way we wanted it,” Paty said.  “Jeff Greco is our contractor and he pretty much re-built everything from the ground up,” she said.  “He tore it down to the bare bones.  The only thing original is the front of the bar and the pine planking on the walls. We wanted to give the place a new identity … make it represent who we are,” she said.

Kirby Farmer grew up experiencing the culinary landscape in the Blue Ridge Mountain area of North Carolina.  After graduation from the Culinary Institute of America in Hyde Park, N.Y. he moved his talents to Hudson, N. Y.

“Local Chef Gavin Metcalfe has joined the team and will be working with Kirby to combine slow-smoked meats with mouthwatering sides. Chef Metcalfe is from South Carolina so there is a strong Southern influence in our kitchen,” Paty said.

Two giant smokers will be utilized to slow-cook southern-style barbeque.

“Richard Mitts, aka” Boomer,” is a 3rd generation Pitmaster from Oklahoma who relocated to Bolton. He has been smoking meats across the South from Arizona to Texas and now in the Northeast” she said.  “His talent and experience in smoking utilizes a slow process of cooking that adds flavor and tenderizes the meats. It’s an art and a favorite technique for barbecue aficionados.”

Paty said the bartenders have been training for four weeks.  “One of our bartenders from New York City came up to train our local people.  All summer long we will have a residency program where our bartenders from Dutch Kills or William Farmer & Sons will come here for a week and work with the local staff.  Richard will be behind the bar occasionally as well,” she said with a smile.

Paty said the cocktail menu is based on the food menu.  “We’ll have specialty cocktails, but our focus will be on cocktails that people are familiar with.  The difference being ours will be made the proper way.  For example, if you like an Old Fashioned you will never taste another one as good as ours,” she said.  “That’s us: we do it right.”

Paty said the staff will be composed of 25 -35 highly-trained personnel.

“The hiring process took some effort.  We adopted an outreach approach to find people who had special skills.  We have staffed The Gem with local talent and also brought in people from all over the world. We also have a rotating staff of bartenders and servers from our other businesses in Hudson and New York City, many of whom we have worked with for years. We have a full staff and we’ll be ready to go on opening day.”

According to Paty, The Gem aims to serve the finest product imaginable in an environment that captures all of the fun and relaxation of the Adirondack lifestyle.

“We want people to walk in the door and feel that the adventure of their day in the mountains will continue as they enjoy exemplary food & drink with impeccable hospitality.”

Paty said she wants their customer’s first impression to be a lasting impression.

“We want them to feel that everything has been done right.  We all grew up in this business.  Our dynamic is how we built our brand.  Most important is the quality of our product:100 percent across the bar or on the table.  Everything we do has been tested and tried.  Hospitality is a big factor for us. We want people to feel like they have arrived at a place that is complete, and everything done has been done intentionally,” she said.

“When everything is done right people can feel it, yet often they don’t know the reason why it feels right.  It’s the quality of the environment and the level of service which makes them feel comfortable.  We are not luxurious. Our establishment meets the standard of pleasantry,” she said. “We strive for a balance between service and food.  We want people to feel like we hit the nail on the head.”

The restaurant, located at the intersection of Lake Shore Drive and Sagamore Road in Bolton Landing, has seating for 50 indoors and 40 covered outside in the rear of the building along with 3 – 4 tables on the front porch for alfresco dining.  Reservations will be accepted via Open Table.  During the summer the kitchen will be open from 11 am to 9 pm (10pm on weekends). The bar will remain open later on weekends.  Call (518)544-5451 (after June 21) for more information.