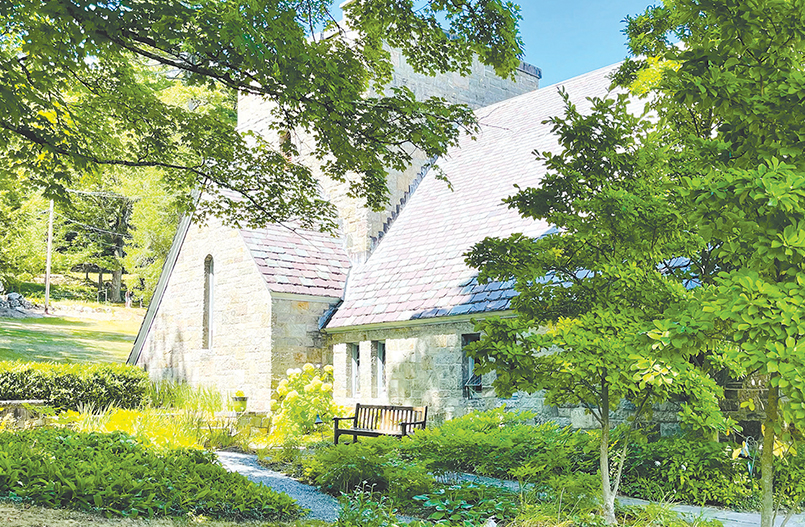 The Helen Hughes Memorial Chapel at Silver Bay YMCA, which was dedicated on June 25, 1922, celebrated its centenary on Sunday, August 14.

Events included services, architectural tours and an organ concert in the chapel and a program in the auditorium that featured remarks by Silver Bay CEO Peter Doliber, Spiritual Life Director Garth Allen and Chaplain Bruce Tamlyn.

The chapel is named in honor of Helen Hughes, the daughter of Charles Evans Hughes, the New York governor who went on to serve as Secretary of State and Chief Justice of the U.S. Supreme Court.

As a student at Vassar College, from which she graduated in 1914, Hughes participated in college conferences at Silver Bay.

No doubt, she was also familiar with Silver Bay as a summer resident of Lake George,

Her father began spending his summers on Lake George as a college student, when he and fellow Brown University fraternity brothers camped on Huckleberry Island.

The family later rented houses on Lake George, including the Stebbins Cottage, now the club house of Cannon Point.

According to Maury Thompson, the journalist who made a documentary about the life of Charles Evans Hughes, Helen became ill while attending a Vassar College reunion at Silver Bay, a victim of the influenza pandemic of 1918.

She reportedly contracted the disease while working as a volunteer in Boston.

Helen Hughes returned to her family’s Glens Falls home, where she died in 1920 after developing tuberculosis.

Delegates to the Silver Bay conferences that Helen Hughes had attended as a Vassar student were among those who supported the construction of a chapel in memory of Hughes, “an amazing person, who gave her life in selfless service to others,” according to Peter Doliber.

Silver Bay’s leaders had encouraged Helen Hughes to become a YMCA organizer and executive, and according to Stu Campbell, the grandnephew of Helen Hughes, devotion to YMCA was among her life’s guiding principles.

“It’s very appropriate that the Helen Hughes Chapel is on the grounds of Silver Bay,” said Campbell.

Made from native granite and chestnut, the chapel’s design exhibits “a simplicity and organic beauty; its stone and wood are brought together in a remarkable way,” said Bruce Tamlyn.

“The inner self is affirmed here and prepared for application in other life’s venues,” said Phyllis DeSmit, a former chair of the Spiritual Life Committee. “Even if there is no one present that you have ever met before, the mutual purpose of being there is solace enough.”