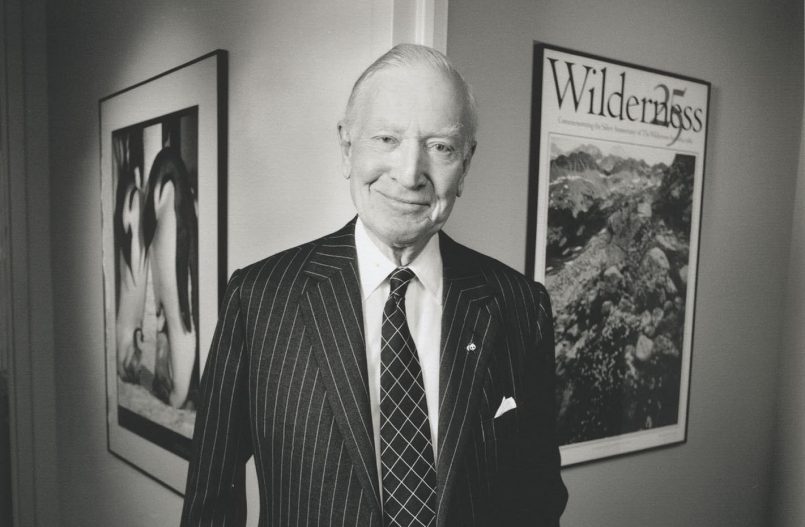 Other than attending the National Governors’ Conference at Bolton Landing’s Sagamore hotel in 1954, Richard Nixon did not, so far as I know, ever visit the Adirondacks.

Yet he was recently ranked the second most environmentally progressive president in American history because, I would argue, of his connection to the Adirondacks.

That connection was supplied by Russell Train, Nixon’s first chairman of the White House Council on Environmental Quality and head of the Environmental Protection Agency under both Nixon and President Ford.

“Train was among those who shaped the world’s first comprehensive program for scrubbing the skies and waters of pollution, ensuring the survival of ecologically significant plants and animals, and safeguarding citizens from exposure to toxic chemicals,” The New York Times commented upon his death in 2012.

At the age of 45, Train abandoned a successful legal and judicial career to become a full-time conservationist – a decision that was prompted in part by his passionate attachment to the outdoors, which he had acquired during his summers in the Adirondacks.

Train was the nephew of Judge Augustus Hand, and he spent virtually every summer of his youth at the family home in Elizabethtown, which served as a base for explorations of the High Peaks and Lake Champlain.

Like other American elites of his generation, Train grew up with the belief that wilderness should be preserved for its own sake, for its aesthetic and spiritual value, and not merely for such utilitarian purposes as fire, flood and drought control.

In January, 1970,  Nixon tasked Train, who was working as an under-secretary of the Interior,  with coordinating the administration’s environmental policies as chairman of his Council on environmental quality

Back in the Adirondacks, his relative by marriage, Richard W. Lawrence, was serving on Governor Nelson  Rockefeller’s Temporary Study Commission on the Future of the Adirondacks, charged with protecting wilderness and promoting outdoor recreation

Both Nixon and Rockefeller recognized the potency of the nascent environmental movement and hoped to harness it for their own purposes.

Unlike Rockefeller, Nixon had few personal convictions about wild nature or environmental issues.

That, however, suited Train, since Nixon’s indifference allowed him more autonomy and enabled him to work without interference from the White House.

Train happened to be vacationing in the Adirondacks in August, 1974 when Nixon left office in disgrace.

(Watching Nixon’s resignation speech with his wife from the Ausable Club, Train commented, “we shared the relief of most Americans.”)

As head of Ford’s Environmental Protection Agency, Train resisted efforts by the administration to roll back curbs on  air and water pollution.

Among his most significant achievments was the development of Clean Water regulations that require industrial runoff – including that generated by marinas – from entering waters used for drinking, recreation and fishing.

The relevance of those rules for Lake George was recently affirmed by a law suit brought by the Riverkeeper and Waterkeeper Alliance organizations against the state’s Department of Environmental Conservation for failing to enforce the federal rules.

Of course, it’s not surprising that a father of  modern national environmental policy should have Adirondack connections.

The president accorded the highest rank as an environmental progressive, Theodore Roosevelt, was also introduced to the Adirondacks as a child, during family vacations on Lake George. His first book, published while still an undergraduate at Harvard, was about the Adirondacks: “The Summer Birds of the Adirondacks,” which he wrote after an extended stay  in Franklin County with his friend Henry Minot.

In fact, it would not be too much an exaggeration to claim that the Adirondack Park is the birthplace of modern environmentalism – and not just because of the state constitution’s early and far sighted protection of the Adirondack wilderness, which, among other things, served as the model for the 1964 law establishing a national wilderness preservation system.

The Adirondacks have also exercised a powerful influence upon writers. Writers, Bill McKibben argues in his introduction to “American Earth,” an anthology of environmental writing since Thoreau, “often drove the environmental movement… and (it is on writers) whom the movement continues to draw.”

Somehow, the Adirondacks have seeped into the bones and the souls of generations of politicians, policy makers, artists and writers, and have  thereby altered the course of a country far larger than its six million acres. Perhaps no other argument in defense of the protection of the Adirondack wilderness is needed.