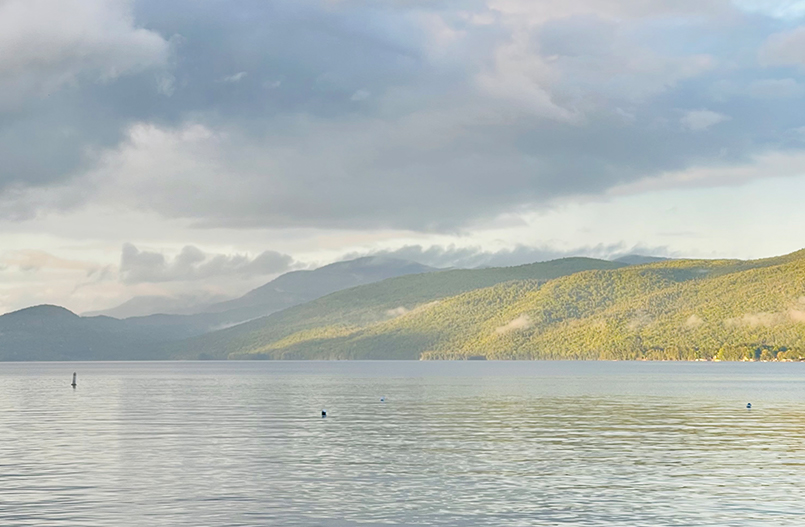 “At the end of the day, the petitioners are very fortunate to have had the ability to enjoy the unobstructed views of Lake George from private property these past 92 years,” New York Supreme Court Judge Robert Muller wrote of those who brought the suit in his August 3 decision.

“It was well within the owners’ rights to sell this property for a subdivision, and it is well within the rights of the new homeowners to build docks on their respective lots,” stated Muller.

Represented by Glens Falls attorney John Caffry, five residents sued the Park Commission for “arbitrarily and capriciously” approving boathouses and docks on the historically undeveloped stretch of road in February, 2021.

“This is a unique public resource,” Caffry told the Mirror earlier this summer. “It’s one of the few places on Lake George where you can drive or walk along the edge of the lake without trespassing. It’s open to the public.  The docks and boathouses will impact the view of the lake and the mountains. The Lake George Park Commission should have found an alternative.”

According to Muller, “[the Court’s] review is limited to (finding) whether the (the Lake George Park Commission’s determination lacks a rational basis and is, thus, arbitrary and capricious.”

Muller continued, “If the agency’s determination has a rational basis, it will be sustained, even if a different result would not be unreasonable.”

Muller concluded that the Lake George Park Commissioners did adequately assess boat congestion on Basin Bay and the potential impacts of more traffic on Cotton Point Road, as well as the visual impacts of the boat houses and docks.

“[The Court] may not substitute [its] judgment for that of the agency responsible for making the determination, and deference to the judgment of the agency, when supported by the record, is particularly appropriate when the matter under review involves a factual evaluation in the area of the agency’s expertise,” Muller stated.

“Judge Robert J. Muller decision affirmed that the Lake George Park Commission was continuing to adhere to the stringent standards set forth in the law,” said Commission chairman Ken Parker. “Never have I observed the Park Commission doing anything but follow its rules and regulations. There simply is no other way.”

“The judge made the right decision,” said Dave Wick, the Lake George Park Commission’s executive director.  “The project did not require any variances and met shoreline density standards established by the New York State legislature.”

The project was reduced in scale from the seven docks approved by the Adirondack Park Agency and conformed to the residential character of the neighborhood, said Wick. “I was surprised by the suit,” said Wick. “The project that we finally approved was vastly less obtrusive than what the Park Commission could have approved. It was a reasonable compromise.”

“As long-term residents of Basin Bay, we were pleased that the judge recognized that that we have interests that are distinct from the general public and we were therefore proper petitioners under New York Law.  Moreover, we are glad that we contributed to the process of considering the application for the docks when it was pending before the LGPC, which is charged with the duty ‘to preserve, protect and enhance the resources of the park,’ and in the court.

“As we explained to the Commission and then in the petition to the court, the application for multiple docks and boathouses situated on a unique and fragile shoreline along the Cotton Point Rd. raised grave concerns. When the initial expansive permits were given, we believed that the Park Commission had not adequately responded to protect the Lake as is the Commission’s responsibility.

“We were disappointed that the court did not agree with our arguments that the commissioners’ final decision was not consistent with their regulations and focused too much on the property owners’ interests and not enough on the needs for protection of the lake. Yet we also appreciate that the Park Commission did listen to the concerns expressed by Lake George residents over the course of two LGPC meetings in 2021 and did reconsider the potential and likely effects of new docks.

“More than 100 letters detailed the worries about the safety, congestion, water use and impact on the lake of the project.

As a consequence, the Park Commission reduced the number of docks and the number of boat berths significantly and added those restrictions to the dock permits.

“We hope that the new neighbors will understand the concerns about the use of Cotton Point Road and of the lakeshore and our shared commitments to Basin Bay, that the Park Commission and the Town of Bolton will enforce the rules, and that, by adhering to the restrictions, the many users of the Cotton Point Road will be safe and the lakeshore protection.”