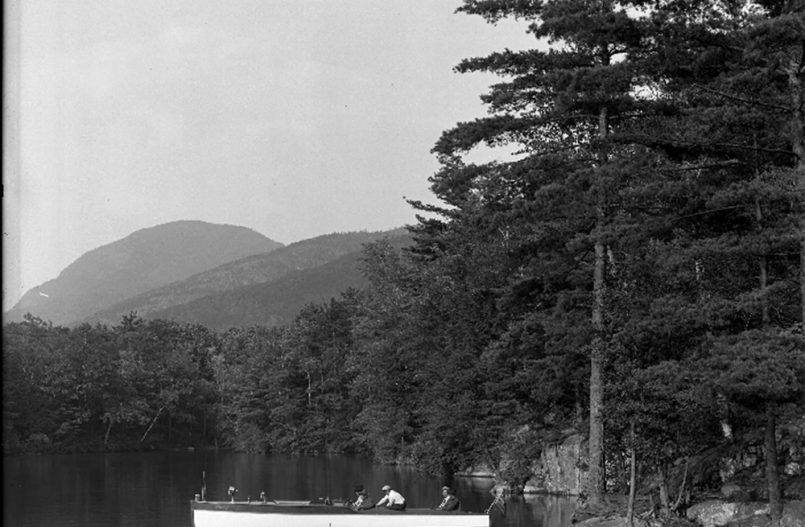 New York State’s Department of Environmental Conservation (and its predecessors, the Conservation Department and various commissions, including the Forest, Fish and Game Commission) have been tending to the Adirondack Forest Preserve for more than 135 years. In 1942, New York State completed the purchase of 7,000 acres and nine miles of shoreline from George O. Knapp, land that includes the 250-acre zone where HWA was found in July. In this archival photo, a Conservation Department crew inspects the Knapps’ hemlock-lined shore that would soon become public lands.
By Anthony F. Hall

The New York State Hemlock Initiative, which plays a leading role in combatting Hemlock Wooly Adelgid in the Lake George watershed, has been guaranteed another two years of state funding, the Department of Environmental Conservation (DEC) has announced.

According to the DEC, New York State has agreed to provide the NYS Hemlock Initiative, which is based at Cornell University, with an additional $1 million from the state’s Environmental Protection Fund over the next two years.

Dr. Mark Whitmore, the Cornell University entomologist who founded the New York State Hemlock Initiative, said in a prepared statement, “State support has been crucial for our ability to develop management strategies to respond to the threat to our hemlocks posed by HWA.”

On Lake George, comprehensive, watershed-wide surveys of hemlock forests have been underway by the New York State Hemlock Initiative, the DEC, the Adirondack Park Invasive Plant Program (APIPP) and the Lake George Land Conservancy since HWA was first detected on the east shore of the lake in July.

State funding made the New York State Hemlock Initiative’s participation in the rapid and coordinated response to the discovery of HWA on Lake George possible, said Whitmore.

“It took years of groundwork to mount a rapid response, one that involved not only multiple agencies, but multiple departments within those agencies. But as soon as DEC whispered ‘HWA and Lake George,’ everyone snapped to it,” said Whitmore.

“This is the kind of moment the Hemlock Initiative was made for, when it was founded in 2014,” he added.

Whitmore is currently working with DEC to apply insecticides to infested trees in a 250-acre zone on the east shore.

Some of those predators will be released in Lake George hemlock stands this month, said Whitmore.

Whitmore said New York’s $500,000 contribution toward a $1.2 million lab at Cornell was crucial to the lab’s progress in breeding, releasing and monitoring insects naturally inclined to prey upon HWA.

When the New York State Hemlock Initiative was created in 2014, “there was no single organization, office or agency marshalling the forces working on hemlocks and collecting and disseminating information about HWA,” said Whitmore.

“We were able to bring together in one place the resources not only of Cornell University, but Cornell Cooperative Extension, the DEC, the Office of Parks, Recreation and Historic Preservation and other state and federal agencies, professional land managers and any number of other constituencies at work on strategies to minimize the impact of forest insect pests on New York’s hemlock forests,” said Whitmore.

The New York State Hemlock Initiative currently employs eight individuals with full-time positions, collaborates with researchers on both coasts and works with the DEC.

“The DEC is a fantastic partner, very supportive and respectful of the information we generate,” said Whitmore. “It has not only invested material resources in the effort.  It has also its employees’ time, in the field and in education. Together, that has made all the difference,” said Whitmore.