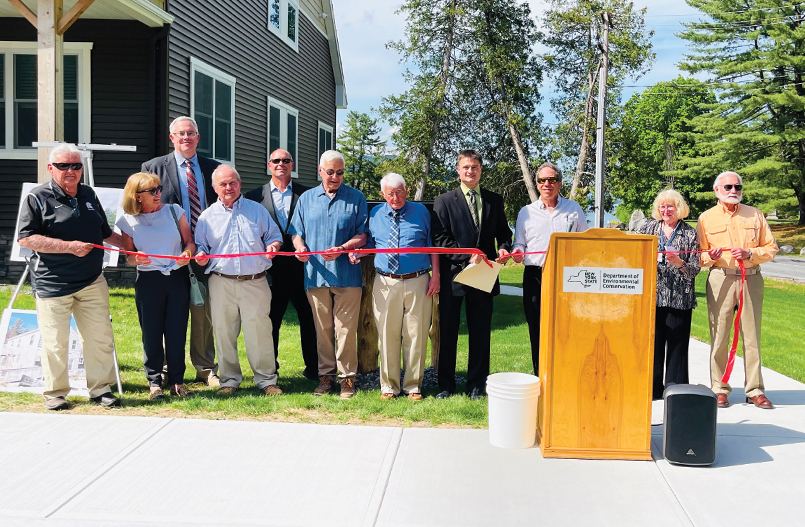 For more than twenty-five years, historian Russ Bellico and the leaders of the Lake George Battlefield Alliance, including the renowned archaeologist, the late David Starbuck,  argued that grounds as historically rich and as hallowed as the head of Lake George deserve a visitors’ interpretive center.

They, along with the rest of us, residents and visitors alike, now have one.

On May 25, a ceremonial ribbon was cut, formally opening a new Environmental Conservation Department facility in Lake George, one housing both the headquarters of the Lake George Park Commission and a Battlefield Park Visitors Center.

The new Visitors Center, said Joseph Zalewski, DEC’s regional director, “is a welcoming and inclusive space that guides visitors on a historical journey, led by interpretive displays and artifacts.”

The building “will also be home to DEC’s valued partners at the Lake George Park commission, the staff and commissioners who work tirelessly to help preserve the beauty of Lake George,” Zalewski told the scores of people who attended the event.

“It really does take partnerships to make a project like this a reality,” said Lyn Hohmann, the past president of the Lake George Battlefield Alliance.

The $1.1 million, environmentally sustainable building and grounds, which includes a cutting-edge parking lot that doubles as a stormwater infiltration system, was financed through New York State’s Environmental Protection Fund.

No Lake George boat or dock fees were used to fund the project.

Ken Parker credited the late Bruce Young, who served as the Lake George Park Commission’s chairman from 2002 until his death in April, 2022, with proposing a dual purpose building to replace the agency’s previous headquarters.

“This building will be part of his legacy,” said Parker.

“It may be the state’s smallest agency, but it accomplishes important things on the Queen of American Lakes, the most important body of water in New York State and perhaps in the nation,” said Stec.

A Visitor Center More than One Hundred Years in the Making

Lyn Hohmann said a Visitors Center for Fort George and the battlefields was first proposed by the Lake George Mirror in 1897, shortly  after New York State first acquired the properties.

But even without consulting experts like Russ Bellico, DEC Historic Preservation Officer Chuck Vandrei or the Battlefield Alliance’s Hohmann, Lake George Park Commission executive director Dave Wick was aware of the need for an interpretive center.

“Every summer, people would come into the Lake George Park Commission’s office asking for historical information. We’re in the middle of a battlefield park, so we’re perfectly positioned to house a visitors interpretive center that could be accessed from the park,” he said.

After having been the site of battles in 1755 and 1757, Fort George became the headquarters of the British as they prepared to launch attacks on the French at Ticonderoga, Crown Point and Montreal. In 1759, General Jeffery Amherst ordered a stone fort to be constructed, replacing a stockaded fort. During the War of Independence, the fort was occupied by both the Americans and the British, said Bellico.

“The ruins were a tourist attraction in the nineteenth century,” said Russ Bellico. “A visitors’ interpretive center will renew interest in the park, which is an excellent example of an 18th century fort and battleground, and attract visitors interested in history to the whole area.”

Until last week, Fort George was the only 18th century military site of national significance in the US without a museum or interpretive center, said Bellico.

“We’ve discovered the wrecks of the sunken bateaux, and David Starbuck and his crews unearthed fascinating relics from the French and Indian Wars and the American Revolution,” said Bellico.

The Visitor Center’s exhibits include a wide array of artifacts uncovered by archaeological digs in the Park.

According to John DiNuzzo, the president of the Battlefield Alliance, the center also features newly created models that illustrate the forts and ships that were utilized by British and American soldiers, and related materials.

“We can’t wait for the public to see what we have here,” said DiNuzzo. “The efforts made by a number of historians to bring this center to life will appeal to both the casual tourist and the dedicated student of history.”

Friday through Sunday through the end of June, when hours of operation will expand.

The Lake George Battlefield Park Alliance has announced that it will resume its guided one-hour tours of the Park’s most important historic sites every Saturday at 11 am. Tours start at the Visitor Center.