A Congressional candidate’s life’s journey has brought him back to his hometown – where he’s fighting for its future and the future of towns just like it. 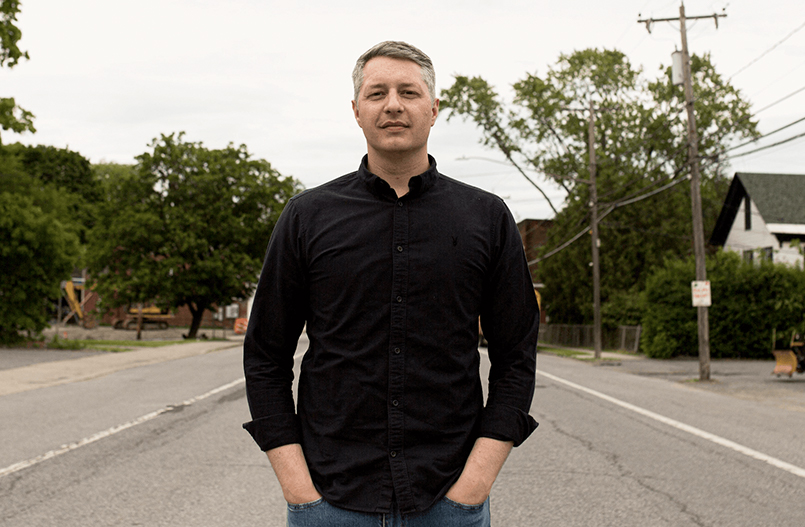 For Matt Putorti, an attorney from Whitehall seeking the Democratic nomination to oppose Elise Stefanik in the 2022 race for Congress, the journey out was, in some respects, the way home.

One of 63 students in his high school class in Whitehall, Putorti attended the academically rigorous Boston College, spent his junior year at Oxford and, before attending Fordham Law School, taught trades to young people in war-torn Sudan and built houses for the families displaced by Hurricane Katrina in Louisiana.

“I did leave Whitehall to pursue an education, but Whitehall is intrinsic to who I am. Whitehall is part of me and part of my family’s story. We’ve been here for generations. I wanted to come back and fight for it,” said Putorti, who brought his campaign to Bolton Landing August 3.

Putorti wants to be an advocate for “Whitehall and the communities like Whitehall across northern New York State” because, he says, the region’s representative in Congress no longer is that advocate, if she ever was.

“I watched Elise Stefanik become radicalized and pursue power for its own sake rather than advocate for our communities,” said Putorti. “We’re struggling. Job opportunities have left. Health care facilities have closed. Our communities are wonderful places, but they need help and Elise Stefanik is not giving them the help they need.”

January 6, 2021, when Stefanik voted to reject the results of the 2020 election, was another catalyst for his congressional campaign, said Putorti.

“Although not a supporter of Donald Trump, my mother was a Republican. But not after January 6,” said Putorti.

Where He’s Coming From

Putorti traces his Whitehall roots to a great-great-grandfather, an immigrant from Italy who came to Whitehall to work on the railroads.

His parents now own and operate a small grocery store there.

Putorti is the first openly gay man to run for northern New York’s seat in Congress.

The National LGBT Bar Association named him one of the 40 best LGBT lawyers under the age of 40 in the country” for his work as an advocate for LGBTQ rights.

“I would never want anyone ever to vote for me just because I’m gay, but I share that part of my life with the public because I think representation matters,” said Putorti. “I want to show people that you can be out and continue to fight.”

Noting that the U.S. Supreme Court appears intent on restricting rather than expanding rights, Putorti said it is especially important now to have a Congress “that is protecting our rights.”

“Why is Elise Stefanik voting against measures that are broadly popular, that people desperately need? Your guess is as good as mine,” said Putorti.

“But everything she does should be seen through the lens of her personal ambition. As a part of the Republican leadership in the House, she votes to protect that leadership position, not to serve the needs of her constituents,” Putorti added.

According to Putorti, the North Country needs a representative who will not only “protect rights,” but “make the right investments in our future.”

“We need to make sure that we are investing in rural development. Glens Falls is thriving because of investments made in that city. Small towns need that kind of investment as well. Twenty percent of our Congressional District lacks access to high-speed internet. If we want to attract people and businesses, we need to provide infrastructure. I’m hopeful President Biden’s Infrastructure Investment and Jobs Act of 2021 will remedy that lack. To me, it’s startling that Elise Stefanik, who represents a rural area that demands investment in infrastructure, voted against that bill,” said Putorti.

The education, experience and skills that he acquired along his journey from Whitehall equip him to fight for Whitehall and towns like it, says Putorti.

“Nationally, much of rural America has been forgotten. Having a representative who grew up in rural America, as I did, will be really important to us as a nation.”

Putorti also wants to be with those rebuilding the public square and helping to make civility common again.

Elise Stefanik, on the other hand, “is ripping apart the fabric of our community,” he says.

She’s imported “the divisiveness of our current politics to the North Country,” says Putorti.

Putorti would like to see our communities return to being “spaghetti dinner towns,” places known for coming together to throw spaghetti dinners and other fundraisers when someone is in need.

“We can invest in public spaces that encourage people to interact and build relationships. We can support the small businesses that bring people together. That’s when we start solving our problems,” said Putorti.

The Democratic primary to choose the candidate to oppose Stefanik in November will be held August 23. Polls open at 6 am and close at 9 pm.