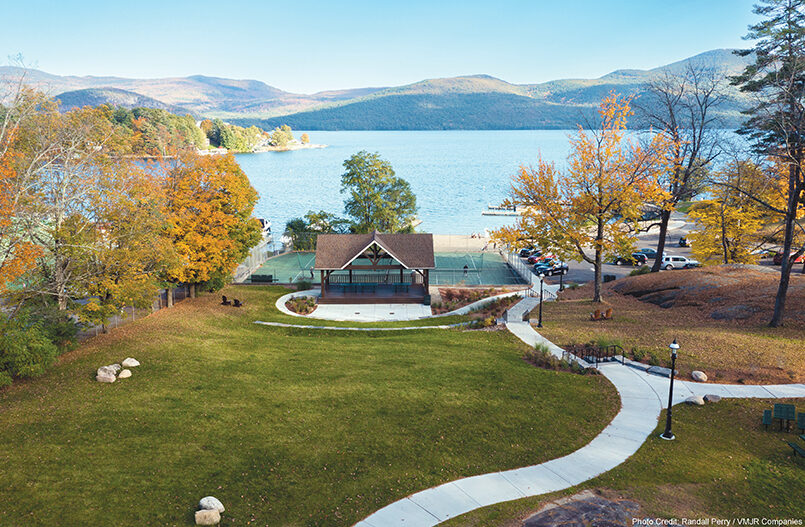 An aerial view of Bolton Landing’s Rogers Park, courtesy of Chazen Companies. Today’s park is based on designs by Marjorie Sewell Cautley from the 1920s. Because of the costs, however, the design was never fully realized.
By Anthony F. Hall

Marjorie Sewell Cautley (1891–1954) was the first woman landscape architect to design state parks, the first to plan the landscape of a federally funded housing project, the first to lecture in a university’s city planning department – and the first person to design a plan for Bolton Landing’s D.L. Rogers Memorial Park.

The story of how this trailblazer came to be associated with Bolton Landing can be found in “Marjorie Sewell Cautley: Landscape Architect for the Motor Age,” the first full-scale biography of Cautley, written by Sarah Allaback, an architectural historian specializing in the history of early American women architects.

Cautley’s blueprint for Rogers Park hangs in the Supervisor’s office in the Town Hall. But even longtime Bolton residents may be unfamiliar with its creator and unaware of its origins.

The house was built in 1894. That year, his last on regular duty (he was recalled during the Spanish-American War to serve as inspector of the Brooklyn Naval Yard), Moore was stationed at Mare Island, California. So, too, was a young lieutenant named William Elbridge Sewell, who married Moore’s daughter, Minnie.

Marjorie was the eldest of the couple’s three daughters, one of whom, Helen Sewell, achieved fame as an illustrator, best known for her covers, drawings and watercolors for the original editions of Laura Ingalls Wilder’s ‘Little House on the Prairie’ books. (Helen Sewell, who died in 1956, is buried in the Bolton Cemetery.)

“Our summers were spent on the shores of that matchless body of water, Lake George,” their sister Barbara Sewell wrote in a privately printed memoir. “Under the pines, with the waves rippling gently onto our shallow sand beach, we played.”

Barbara Sewell continues, “Grandfather John W. Moore was now a retired Rear Admiral (he was raised to that rank in 1906 in recognition of his services in the Civil War) and a most generous and hospitable host. Nothing he loved better than to sit at the head of his large mahogany dining table with a crowd of young people gathered around.”

Moore’s wife, Emily Sawyer Moore, “loved her family but was easily annoyed by the children. So a playhouse was built on the shore of the lake.”

One summer, Marjorie organized a private summer camp on the lake, which a dozen children from wealthy summer families attended, paying a tuition of $75 each.

Much of Cautley’s interest in nature, which she would incorporate into her designs for planned communities, even or perhaps especially those integrating the requirements of automobiles, can be traced to those summers on Lake George.

Minnie Moore Sewell died in 1901, her husband, two years later. According to Barbara Sewell, the aunts, Minnie Sewell’s sisters, played a large role in the girls’ lives on Lake George and in Brooklyn, where they spent the school year with family members.

When not at Lake George or Brooklyn, the three girls were often at the Saratoga County farm of their aunt Emily and her husband Claude Bailey, who as it happens, were the grandparents of a current, prominent resident of Bolton, Bob Bailey.

The early deaths of Cautley’s parents, Allaback suggests, contributed to her sense of self-reliance and led her to seek a career that would make her self-sufficient. In the profession of landscape architecture, Cautley not only found the means to support herself, but a vehicle for self-expression.

After graduating from Cornell University’s landscape design program in 1917, Cautley went to work for a Boston-based landscape architect.

In 1920, she opened her own office in Patterson, New Jersey, where she specialized in designing parks and other public projects.

According to Allaback, Cautley’s work in the early 1920s, especially on the thirty-acre Roosevelt Memorial Common in Tenafly, New Jersey, “gave her credibility as a park planner, and she used this experience, and her family connections, to gain the commission for the beachfront park less than a mile from her grandfather’s summer home in Bolton Landing.”

In July, 1924, the Lake George Mirror reported that the town’s newly-acquired three-acre lake shore parcel would “undoubtedly become one of the most beautiful of parks.”

According to Allaback, “it is unclear how Cautley gained the commission but being Commodore Moore’s granddaughter certainly was an asset.”

Allaback speculates that “Members of the tight-knit community must have recalled her exploits as a summer camp counselor a decade earlier, among other communal adventures on the islands.”

Cautley’s vision for Rogers Park was never completely realized, presumably because of the expense. Nevertheless, many of the design’s elements, such as the amphitheater, the recreational facilities and the use of natural features, were incorporated into its construction and remain essential ingredients.

“Cautley’s design illustrates a sensitivity to the site’s surrounding landscape (and the need) to create spaces for a variety of community activities,” writes Allaback,

Like her mature designs, the plan for Rogers Park responds “to the growing public interest in recreational tourism brought on by increasing travel and leisure time,” writes Allaback.

While completing the designs for Rogers Park, Cautley joined forces with the so-called “Garden City movement” that sought to improve the aesthetics, public health and social benefits of urban life by creating planned communities in the outer boroughs and suburbs of New York.

At Sunnyside Gardens in Long Island City, Queens, an experiment in better living that combined affordable housing and access to Manhattan with parks, playgrounds and gardens, Cautley and Eleanor Roosevelt were the only women who played major roles.

A few years later, Cautley designed the landscape of Radburn, New Jersey, the first housing project to anticipate the impacts of the automobile, in part by segregating pedestrians from vehicular traffic. A park Cautley designed for this “town for the motor age,” Allaback writes, “incorporated an element of adventure in its twists and turns, shaded private play areas and unbroken stretches of meadowland” – elements that she had hoped to see, albeit on a smaller scale, included in Rogers Park.

Cautley’s interest in the social potency of natural parks received its highest expression during the New Deal, when she was appointed landscape consultant to New Hampshire Governor John Gilbert Winant. In that capacity she designed four state parks, still very popular recreation areas. Margaret Sewell Cautley died in 1954, after having been institutionalized with mental disorders for nearly a decade.

In 2019, Sarah Allaback visited Bolton Landing, where she explored Rogers Park and examined the blueprint in the Town Hall, toured Commodore Moore’s former home at DFWI and consulted with town historians Ted Caldwell and Bill Gates.  She is expected to return this summer to give a talk at the Bolton Historical Museum in conjunction with the museum’s 2023 exhibit featuring women with Bolton Landing connections who made a difference in the wider world – Marjorie Sewell Cautley among them.