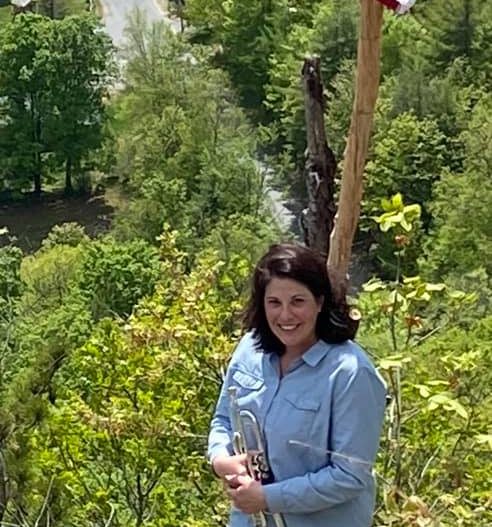 Denise Liquori Foster, Warrensburg Jr-Sr High School’s band director, wanted to participate in something larger – much larger- than herself on Memorial Day this year.

Instead, without ever intending to, she became a focus national attention, appearing on CBS Evening News playing Taps on Hackensack Mountain, with the streets of her town spread out below her.

And yet, Foster was part of something large, as large as the nation itself.

While she may have been alone on Hackensack, she was  one of tens of thousands of soloists playing Taps on Memorial Day, in unison.

“Literally from the mountains, to the prairies to every elevation in between — people from all walks of life walked outside to play,” CBS News said in a press release.

According to CBS, the event, “one of the largest musical performances of all time,” was an idea hatched by “On the Road” correspondent Steve Hartman  and Jari Villanueva, who leads a group called Taps for Veterans.

Together, they created  “Taps Across America,” a Memorial Day tribute to America’s fallen heroes.

Villanueva told CBS News that  Taps was an appropriate song for a year when the country has endured so much loss.

“It’s not only a military call but also a call that reassures us,” Villanueva said.

Musicians were asked to play the  mournful tune wherever they might find themselves and then send a video of the performance to the network.

“To say we were ‘blown away’ by the result would be an understatement,” stated CBS.

“The musicians were some of the best — like Ethan Bensdorf with the New York Philharmonic — and some of the greenest — like 9-year-old Caitlyn Sanders from Ellicott City, Maryland, who spent all weekend learning.

CBS then selected a very few of the thousands of videos it received for broadcast on the evening news. One of them, the one that brought the segment to a close, was Denise Foster’s.

“I was thrilled to see that. I had no advance knowledge that I would be included. I happened to be watching the news and there I was,” she said.

Foster, a Lake Luzerne native who has taught in Warrensburg for nearly 15 years,  wanted the school to take part in the tribute because she thought it might be a valuable musical and civic experience for her students.

“CBS sent out a call to all buglers to help create a moment of remembrance. As a music teacher, I encouraged my students to participate. And, in fact, one of my eighth grade students spent the weekend learning Taps, which he performed at the town’s War Memorial. I was so proud of him for accepting the challenge, because Taps is not an easy piece to play.  When he finished his rendition, which I could hear from where I stood on Hackensack, I began mine, ” said Foster.

Foster’s ten year old son Kyle climbed Hackensack with her and filmed the performance that was sent to CBS.

“I wanted to teach him something about patriotism, something that might stick with him for years to come,” said Foster. “We made an afternoon of it.”

“But this was something I also wanted to do for my community,” she added.

“At this time of year,  we’re marching in the local parade and the students’ final concerts of the school year are being presented. But because of the pandemic, we can’t have those events, and people miss them.”

Even alone on Hackensack, Foster felt as though she was indeed a part of “one of the largest musical performances of all time,” to use CBS’s description of the event.

“It was just a touching story – tens of thousands of people from across the country playing Taps together. Many of my friends in this area participated. It was great to see their videos, but it was also wonderful to know that so many people from all around the country were participating with us,” she said.