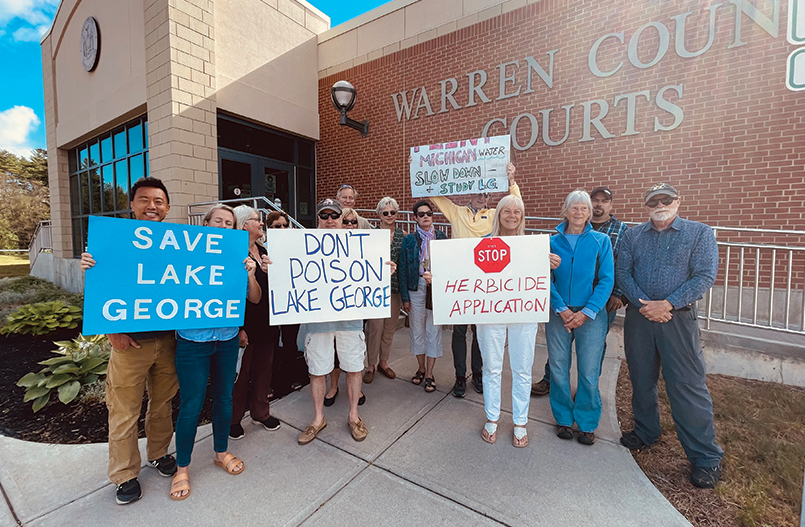 Opponents of the Lake George Park Commission’s plan to treat milfoil beds with the herbicide ProcellaCOR gathered outside the Warren County Court House on June 8.
By Anthony F. Hall

“Lake George is not a petri dish,” Lake George Association attorney Michael Crowe told Justice Robert J. Muller in state Supreme Court on June 8. “Before we dump a chemical into Lake George, where no chemical herbicide has ever been used to control Eurasian watermilfoil, a chemical that no court order can suction up if it damages the ecosystem, let’s take our time and thoroughly study this.”

The LGA has asked Muller to enjoin the Lake George Park Commission from treating the invasive aquatic weed with the herbicide ProcellaCOR until he has fully considered the organization’s suit against the Adirondack Park Agency, which it filed May 12, seeking  to annul the permit the agency granted the Lake George Park Commission, authorizing it to use the chemical as part of a pilot project in two bays on northern Lake George.

Muller said he would render a decision “at the earliest opportunity.”

It was expected to be delivered before Wednesday, June 15.

If Muller grants the LGA a preliminary injunction, he will have effectually prevented the Park Commission from using the herbicide in Lake George this year.

Was the APA Ruling Rushed, Arbitrary and Capricious?

According to Muller, the Court’s mandate was limited to determining if the Adirondack Park Agency failed to comply with its own procedural requirements when it approved the use of the chemical at its April 14 meeting.

The LGA charges the approval process was “procedurally flawed and arbitrary and capricious.”

Among other things, the LGA alleges that the APA “orchestrated a rushed process to approve the use of an herbicide in Lake George despite an outpouring of technical and scientific opposition.”

Michael Crowe told Justice Muller on June 8 that “if a determination by an agency is not supported by the record, that determination is necessarily arbitrary and capricious.”

Whether the public has had sufficient time and opportunity to weigh in on the Park Commission’s proposal to treat invasive aquatic weeds with chemicals was among the questions posed by Justice Muller.

“A lot of attention has been paid to this issue,” said Muller.

“Given the level of public interest, why were there no public hearings? Wouldn’t it have been of benefit to have the comments of the public articulated?”

Crowe told Muller that public hearings were precisely what the LGA has advocated, especially since members of the APA board appear to have been denied access to the comments of roughly one hundred members of the public, as well as experts such as Dr. Carol Collins and Lake George Waterkeeper Chris Navitsky, who joined the suit against the APA.

The LGA also claims that residents of Glenburnie and Huletts Landing – the locations of the bays slated for treatment – were not adequately informed of the proposed treatments.

A resident of Huletts Landing has also joined the suit to annul the permits.

Joshua Tallent, an Assistant Attorney General within the AG’s Environmental Protection Bureau charged with defending the APA, said the public was given ample opportunity to comment upon the proposal.

Tallent added that he saw no reason for holding public hearings since several New York State agencies and divisions within agencies reviewed the impacts of ProcellaCOR on drinking water and aquatic organisms before the Department of Environmental Conservation’s Bureau of Pesticide Management approved the use of the herbicide in New York in 2019.

“There were no issues or gaps in the data presented to the Adirondack Park Agency,” Tallent said.

Is Time Truly of the Essence?

Justice Muller also questioned the urgency of applying the herbicide to milfoil this year.

“Lake George has been here for 12,000 years. Milfoil has been here for 34 years. What is the urgency in applying the herbicide within the next few days rather than a year from now? Where is the harm in a pause?” Muller asked.

According to Tallent, the harm would inure to the environment, as Eurasian milfoil threatens the lake’s ecology, and to the taxpayers of New York, who have spent more than seven million dollars over the course of thirty-four years attempting to manage Eurasian milfoil with such methods as benthic barriers, hand harvesting, and diver-assisted suction harvesting.

Crowe said the LGA has offered to study the chemical and its potential impacts on Lake George’s ecosystem without depositing it in the lake itself.

The benefits to be gained by continuing to treat milfoil with time-tested methods, “without adding a toxic chemical to the lake” outweigh the risks of applying ProcellaCOR without further study, Crowe said.

Muller asked what, if any, consequences were to be suffered if the LGA was allowed to conduct an independent study of ProcellaCOR.

Tallent said the LGA has not shown why such a study is necessary, since the chemical has already been studied by the EPA and reviewed by several New York State agencies and divisions within those agencies.

“We do not need new studies,” said Tallent. “The DEC determined that ProcellaCOR is ‘practically non-toxic,’ the safest category possible for a chemical, and concluded that its use was appropriate for Lake George.”