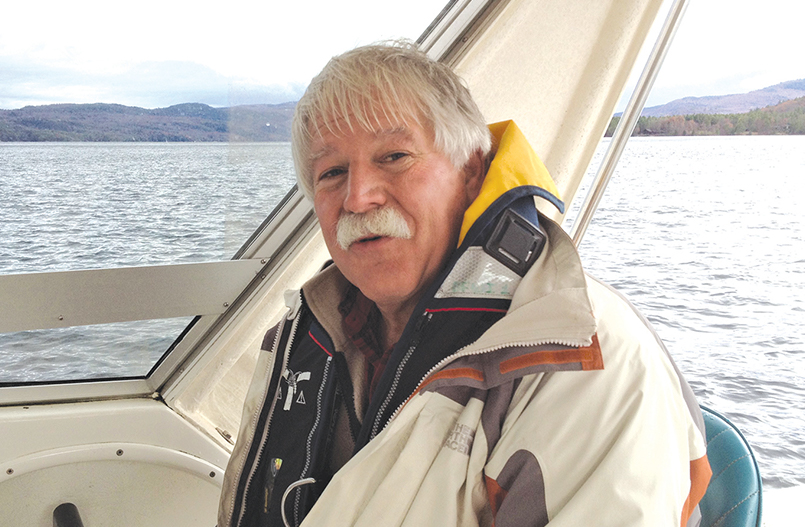 Over the years, Eichler’s expertise expanded to include acid rain, aquatic plants – native and exotic – and invasive mollusks and bivalves, as well as every aspect of water chemistry, from sampling to data analysis.

According to Chuck Boylen, the former director of the Fresh Water Institute who worked with Eichler for all but a few of those forty years in Bolton, Eichler’s professional achievements have been recognized widely and frequently.

Of equal importance, said Sandra Nierzwicki-Bauer, who began working with Larry Eichler in 1993 when she became the director of the Darrin Fresh Water Institute, were his many contributions to the Lake George community.

“Larry was the face of the Darrin Fresh Water Institute within the community,” said Nierzwicki-Bauer. “If you had a water problem, he was there to help, whatever the issue. He always made some time to talk to you and come up with a solution to your problem.”

Once Eichler began a program that regularly and consistently tested waters at public beaches for coliform, local government officials came to rely upon him for the information they would need to close or safely re-open beaches.

Wick added, “He brings people together. He’s always positive and he knows more than anybody else does about these issues.”

Eichler was on the scene in 1985 when Eurasian watermilfoil was discovered in Lake George.

In 1987, the Lake George Aquatic Plant Survey was launched as a three-year research project to study the growth and distribution of the invasive plant.

“With Larry playing a crucial role, this study and its recommendations set the standard for identifying new locations of milfoil beds in Lake George and the best management techniques to use to control of its spread,” said Boylen.

For several years, Eichler even hand-harvested the milfoil in Lake George.

As Eichler’s reputation as an aquatic plant specialist grew, dozens of lake associations throughout New York State and Vermont contracted with the Darrin Fresh Water Institute for plant surveys.

Eichler’s survey of Trout Lake, conducted for the Lake George Park Commission, established conclusively that milfoil is not present in that water body – as of now.

“Larry was a true collaborator, someone always ready to chip in and contribute, not just their particular piece of expertise, but innovative ideas and creative energy,” said Nierzwicki-Bauer. “In scientific work, you need to be flexible, to try new approaches when old ones aren’t working, to be creative in addition to being methodical. That’s the type of person Larry is.”

Chuck Boylen commented, “I want everyone to know how much I appreciate everything Larry has done for the Darrin Fresh Water Institute, for Lake George and Bolton Landing. As the summer residents return and come looking for answers to their questions, they will be disappointed to find that Larry is no longer here.”

Rick Relyea, the current director of the Darrin Fresh Water Institute, presented Eichler with a wood relief map of Lake George at a party held in his honor at the research lab on June 4.

“So many people tell you that if you have a job you love, you’ll never work a day in your life. And that has been true with my career. It’s been wonderful working with all of you on so many different projects over the years. We’ve had a great time,” said Eichler.