The LGA and The Fund working together to reduce nutrient runoff, guided by science from Jefferson Project 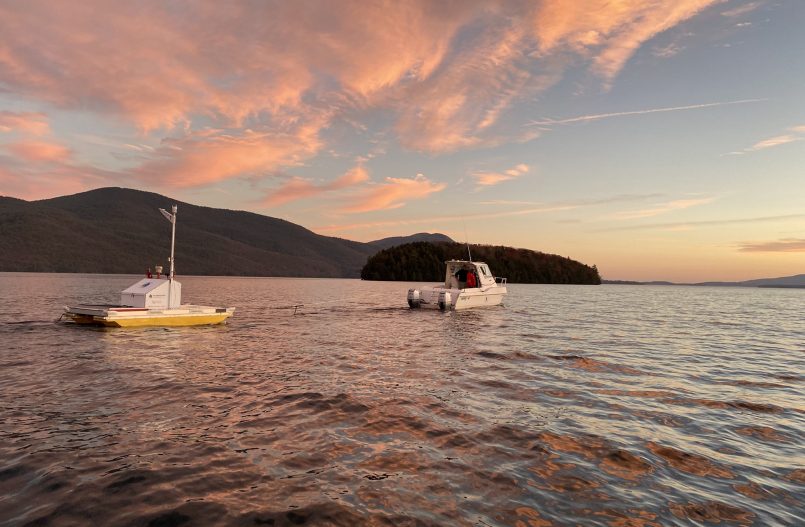 The Harmful Algal Blooms (HAB) discovered in Lake George in early November – the first confirmed outbreak here ever and the first reported sighting in decades –contained no detectable levels of toxins, scientists from the Jefferson Project and the state’s Environmental Conservation department report.

The first of what was later found to be several algal blooms occurred in Harris Bay on Saturday, Nov. 7.  Additional blooms were spotted on Monday, Nov. 9 in Harris Bay, Sandy Bay, Warner Bay and in the nearshore waters of Lake George Village, all of which dissipated within 24 hours.

“Cyanobacteria sometimes produce toxins, sometimes not,” said Dr. Rick Relyea, director of The Jefferson Project and a professor of biological sciences at Rensselaer.  “But even if no toxins are detected, it doesn’t mean none are present.  It only means that in the samples we tested, concentrations were not sufficiently high to be detected.”

Some Dolichospermum species are capable of producing toxins that irritate the skin and can harm the liver and nervous system, said Jacqueline Lendrum, Director of the Bureau of Water Assessment and Management for the Department of Environmental Conservation.

“Although no toxins were found in the HAB in Lake George, people should not be given the impression that it’s safe to drink untreated lake water or allow their dogs to go swimming,” said Lendrum.

On Tuesday, Nov. 10, the Jefferson Project deployed vertical profilers to collect data at various depths throughout the water column at sites where blooms were observed, said Dr. John Kelly, IBM’s top technology executive and a cofounder of the Jefferson project.

“Our team of experts will be on the lake and in our labs until we understand this,” said Kelly.

“Since the algal blooms were first observed, we have continued to draw samples from 21 sites around the south basin, three times in just the past two weeks,” Relyea said on November 24.  “We want to understand the conditions that trigger algal blooms. We’re subjecting water samples from across the lake to sophisticated chemical, biological, and computer modeling analyses.”

What Caused the Harmful Algal Bloom?

Among other things, Rick Relyea said, researchers are now analyzing data related to the air, water, winds and temperatures when the blooms occurred.

“Why did the blooms show up under these conditions?” asked Relyea. “We know this species can only come to the surface as a film of cyanobacteria when the water is extremely calm, which it was.”

“Conditions were not unlike those on Skaneateles Lake in the fall of 2017,” said the DEC’s Jacqueline Lendrum, referring to outbreaks that triggered a $65 million initiative to combat Harmful Algal Blooms in twelve upstate New York lakes, Skaneateles Lake and Lake George among them.

According to Relyea,  Dolichospermum fuscum is known to have little pouches, called air vacuoles, which enable them to float in the deep waters of the open lake.

It has been hypothesized that the lake’s currents brought the blooms from the open waters to the bays and shore areas where they were first observed, he said.

“Does the data support that scenario? The Jefferson Project’s advanced circulation models help us predict which way the surface currents will move, given the weather. Were the currents moving in a direction that would carry a film of algae, causing it to concentrate in these cul de sacs? We’re working on that. We’re running the models,” said Relyea.

Dr. Harry Kolar, Jefferson Project associate director and IBM fellow, said, “While preliminary computer models suggest that this HAB was, in all likelihood, enabled by calm water conditions and then driven into the bays and nearshore waters of Lake George Village by wind or water currents, work on the sources of the algae and nutrients necessary to trigger and sustain a bloom, will continue.”

According to the Jefferson Project, the source of the nutrients might be watershed runoff or the lake bed itself, aggravated, perhaps, by global climate change.

“Information from the Jefferson Project will help guide decision-making in the future by everyone on Lake George, but there are plenty of things that we all can, and should, be doing now,” said Walt Lender, the Lake George Association’s executive director.

LGA and The Fund Now Working Together

A joint press release from the LGA and The Fund for Lake George stated, “We are combining our expertise and resources in a collaborative effort that will jointly strengthen our protective work on behalf of Lake George.

We will take our lead from the science and investigatory work of The Jefferson Project at Lake George. Together, we will continue to watch over Lake George, monitor water quality and follow the science with a goal of doing everything we can to prevent another Harmful Algal Bloom.”

Eric Siy, the executive director of The Fund for Lake George said, “HABs represent an existential threat to Lake George. It only makes sense for us to collaborate.”

The first HAB was identified by Kristen Wilde, the LGA’s Director of Education, who also collected and disseminated photos and water samples.

“The LGA did a great job identifying the HAB and alerting the community. Its membership is a great outreach network, which gives it an ability to keep hundreds of eyes on the Lake,” said Siy.

Siy and Lender both said their organizations will continue their work reducing the flow of pollutants into Lake George, a potential source of Harmful Algal Blooms.

“We know that the nutrients getting into the lake from polluted stormwater, from leaking septic systems, and from erosion are all the food any strain of cyanobacteria needs to create a bloom,” said Lender. “So we need to redouble our efforts to stop that flow of nutrients all around the watershed.”

“Now that Lake George has had a Harmful Algal Bloom, there are many questions that need answers, not the least of which is: What actually triggered the cyanobacteria to bloom?” said Walt Lender, LGA Executive Director. “The Jefferson Project scientists are working on learning what exactly the triggers and cause of the bloom were.”

According to Rick Relyea, the Jefferson Project is now assessing the genetic factors, water chemistry and circulation, environmental effects, and other factors to understand what triggers toxicity in algae, research that will inform any policies and actions undertaken to avoid similar in the future.

“The Jefferson Project is committed to providing insights into what causes HABs, so that a holistic set of ‘science to solutions’ guidance can be shared to inform future remediation actions and public policy to protect our freshwater assets and related economic and recreational value in New York State,” said Eric Siy.

Assessing the Results of Research

“We look forward to an open dialogue with the DEC and our local partners,” said Dave Wick, the Lake George Park Commission’s executive director. “With so many responding immediately to this issue, and with unparalleled expertise available to us, we’re in as good a situation as we possibly could be right now.”

“It’s critical that we all come together to work on this issue It is up to all of us to do everything we can to prevent another HAB from happening on Lake George,” said Walt Lender.