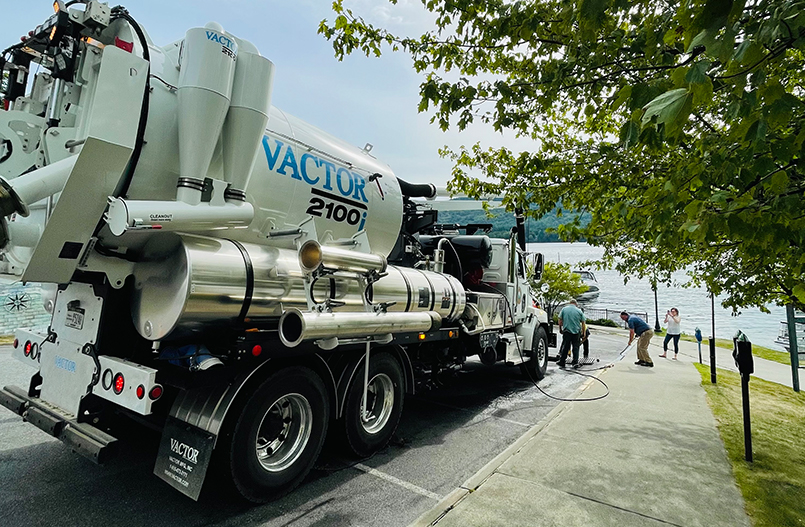 To prevent pollutants from reaching Lake George, the Village of Lake George has invested roughly $500,000 in a multi-purpose mobile unit that vacuums, suctions and cleans stormwater drains, catchment basins and sewer lines.

“This is one of our primary tools for protecting Lake George,” said Lake George Village’s Superintendent of Public Works, Keith Lanfear.

Lanfear could be found on Lower Amherst Street on August 17 with public works staff Tim Shudt, Jr. and Chris Buckley cleaning a hydrodynamic separator of the litter and sediments that had settled there over the last few months.

Using a $115,000 grant from the Lake Champlain Basin Program, secured by the Lake Champlain-Lake George Planning Board for Lake George Village, the Public Works Department installed the separator as well as a bio-retention basin near Shepard Park Beach a few years ago.

“Each system takes stormwater from a different part of the watershed,” said Beth Gilles, director of the Board. “Both systems are meant to capture stormwater, sediment and debris before the stormwater enters the lake.”

“For several reasons – natural, navigational, recreational – sediment is a huge water quality issue,” said Gilles. “Any amount of sediment that we clean from these systems and keep out of the lake is beneficial.”

According to Lanfear, the Lower Amherst Street system is one of nine hydrodynamic separators found throughout Lake George Village and one of scores of components treating runoff from streets, parking lots and sidewalks.

Much of Lake George Village’s modern stormwater infrastructure was constructed between 1993 and 2012, when Dave Wick, now executive director of the Lake George Park Commission, managed the Warren County Water, Soil and Conservation District.

“It was my goal to retrofit the entire Village of Lake George so that no runoff was directly discharged into Lake George,” said Wick. “Before I left the Soil & Water Conservation District, I believe we achieved 60% of that goal.”

That construction was made possible by the millions of dollars in grants the Soil and Water Conservation District secured to retrofit Lake George’s stormwater management system with hydrodynamic separators, dry wells and infiltration chambers.

As that infrastructure grew, however, it became increasingly clear that a systematic program for maintaining it had to be established and administrated.

In response, the Lake George Association acquired a trailered Catch-Vac, which it lent or leased to Lake George Village and other municipalities on an as-needed basis.

Lake George Village’s new unit, the brand name of which is Vactor 2100, is a successor to that much smaller, less sophisticated piece of equipment.

According to Keith Lanfear, it is available for the use of nearby communities through Warren County’s shared equipment program.

In addition to protecting the water quality of Lake George, the Vactor 2100 is helping Lake George Village adapt to climate change.

According to Lanfear, “there are no small storms anymore.”

Extreme weather is something even small communities like Lake George must prepare for, and the Vactor 2100 helps the Village determine whether its existing infrastructure is strong enough to withstand the intense storms which now arrive with increasing frequency.

“When we’re using the unit to clean infrastructure, we’re also using it to inspect it; if we see the infrastructure is no longer adequate to our needs, we can start bringing it up to contemporary standards,” said Lanfear.