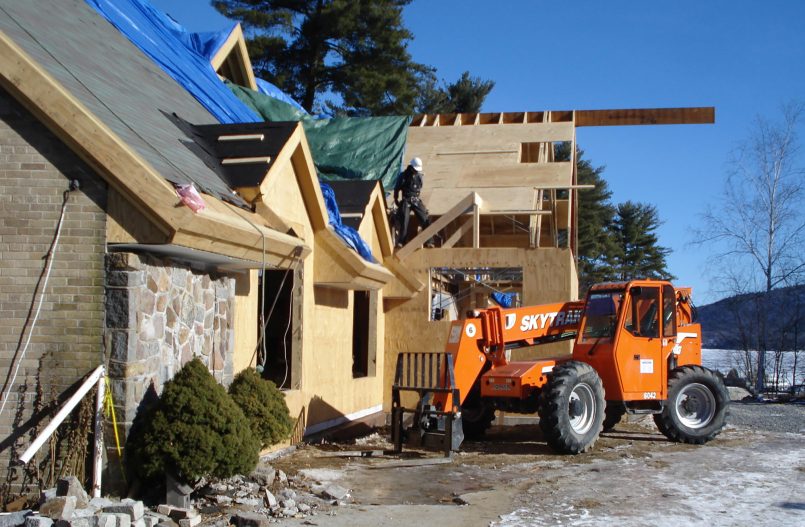 Stormwwater regulations seek to curb discharges from a range of sources, all related to development. Image courtesy of The FUND for Lake George.
By Anthony F. Hall

The Lake George Park Commission has adopted new rules limiting development within 35 feet of streams. At the same meeting, the Commission adopted the first significant changes to its storm water regulations since they were originally approved in 1998.

Both sets of regulations passed unanimously at the Commission’s February 23 meeting.

The stream protection rules prohibit construction and tree cutting within 35 feet of the 86 streams identified by the Department of Environmental Conservation as tributaries of Lake George. The new rules also include provisions that would allow homeowners to secure recreational access to the streams or, if necessary, build bridges across them.

According to Dave Wick, the Commission’s executive director,  the revised stormwater rules stipulate that: fertilizer applications are prohibited within 50feet of any waterbody; all development activities  requiring a stormwater permitmust now address runoff from existing, impervious surfaces;  all timber harvestactivities must be preceded by documentation; stormwater infiltration devicesmust be located  more than 35 feet away from waterbodies;  setbacks for ‘major’stormwater devices projects have  been reduced from 100 feet to 35 feet .

“Our proposed changes in the stormwater regs are consistent with what we discussed with local government officials in 2018,” said Wick. “These changes include: timber harvesting requirements; prohibitions on the use of fertilizer within 50 feet of a waterbody; and retrofitting developed properties with stormwater management controls.”

Others, however, are not so certain the new rules will be as effective as they could or should be.

A February 18 letter to the Commission from Waterkeeper Chris Navitsky urged the agency to delay adopting the stream corridor rules, arguing, among other things, that further study of the “the appropriate setback for stream corridors” was required.

Dr. Jim Sutherland, a retired scientist who worked in the Division of Water at the New York State Department of Environmental Conservation (NYS DEC) for almost 30 years, said that DEC-identified tributaries constitute only a portion of 140 streams flowing into Lake George. Under the newly adopted rules, more than 50 of these would be left unprotected.

Moreover, he stated, the streams that contribute the most water to Lake George, or tumble from the steepest slopes, should be governed by more stringent rules.

“One size does not fit all,” he said, suggesting that it might “be more appropriate to assign a 50-foot corridor of protection to streams like West Brook and Finkle Brook, where steep slopes exist between the top of the watershed and the lake surface.”

A memo to members of the Lake George Park Commission following their vote indicates that Dave Wick, for one, is at least in partial agreement with Sutherland.

Wrote Wick: “Over the next year, we will be working collaboratively with DEC to assess and update their stream database and mapping, to more accurately reflect the true stream network within the Lake George watershed.  This is a final important step in this overall effort, and we look forward to working with our DEC partners on that initiative.”

As to the effectiveness of 35-foot corridors, scientists from the Pennsylvania-based Stroud Water Research Center told the Commission: “stream buffer protection has multiple benefits for both lake water quality and the streams themselves. Most, if not all, of these benefits would be considerably enhanced by increasing the buffer width. The 35-foot width will afford some protection, but the evidence shows that the protection is much less than could be realized by a substantially wider buffer width.”

Commenting on the revised stormwater regulations, Waterkeeper Chris Navitsky noted that rules addressing runoff from developed or pre-existingimpervious surfaces “actually exempt many projects.” As a result, “the regulation falls far short of what is necessary to provide meaningful improvements in lake protection.”

“The four-year process of draftiung the new rules involved more than 50 public and private meetings with municipal officials, agency partners, environmental groups, chambers of commerce, business owners and design professionals, among others. These new stream corridor productions are on top of the best-protected watersheds in the nation and the combined initiatives will offer full, long-term protection of the lake’s water quality,” he said.

The new regulations are effective as of April 2021.