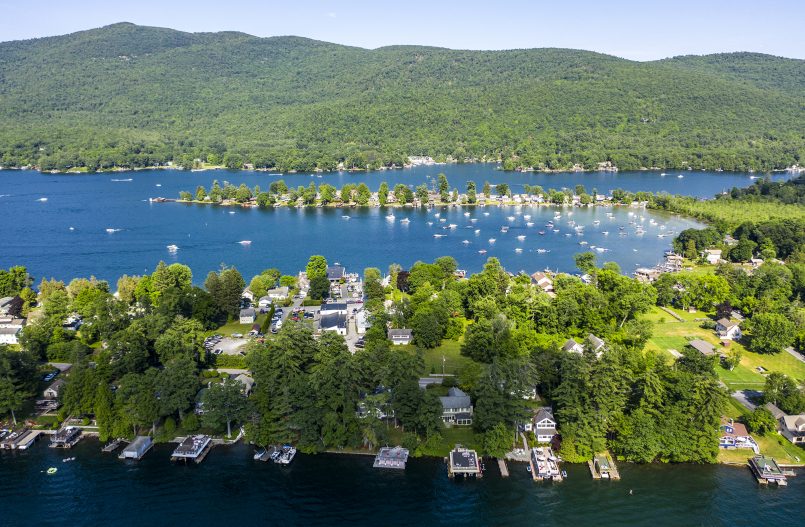 Lake George Supervisor Dennis Dickinson says he will vote against a proposal requiring the inspection of thousands of Warren County septic systems before transfers of property – if, that is, the bill makes it out of the Board of Supervisors’ Environmental Concerns Committee, which Dickinson chairs.

As drafted, the law would require septic systems to be inspected by qualified engineers and found to be in compliance with state and local laws before the sale or transfer of a home could legally occur.

“The bottom line is, people must inspect their septic systems when putting a property on the market. If the system fails an inspection, it has to be fixed,” said Glens Falls Supervisor Claudia Braymer, the bill’s sponsor.

According to David Miller, Clean Water Program Coordinator for the Adirondack Council, the Adirondack Park’s largest environmental organization, “time-of-sale inspection requirements are the least disruptive to the homeowner.”

“Septic inspection becomes part of the regular series of home inspections needed before a sale is completed, such as structural, plumbing, pests, radon, If work is needed, it can be financed as part of the sale,” Miller said.

The Warren County law would apply only to homes within 250 feet of specified water bodies, among them: Lake George, Schroon Lake, Brant Lake and the Schroon and Hudson Rivers.

Towns May Opt Out

At Dickinson’s request, the legislation allows municipalities to exempt themselves from the law, preventing it from being applied to homes within those municipalities.

Dickinson said he preferred voluntary to mandatory inspection programs, especially if local residents were responsible for the costs of inspections.

Moreover, he said, his town already has a septic system improvement program of its own in place.

According to a Memorandum of Understanding signed in August, 2019, by the Lake George Town Board and The Fund for Lake George, residents who agree to have their septic systems inspected and maintained will be eligible for grants to have them modernized and improved.

Bolton, Chester and Queensbury would also be exempt from the new law.

The Town of Bolton’s law, requiring all on-site septic systems to be inspected and in compliance with state and local standards before a property is sold or otherwise conveyed, took effect September 1, 2019.

The Town of Queensbury adopted a law limited to waterfront properties only in 2018.

According to Chestertown Supervisor Craig Legget, a similar program is incorporated within its zoning regulations.

Dickinson said he has found little support among his fellow Supervisors for the proposed bill.

The Adirondack Council, the Adirondack Park’s largest environmental conservation group, has issued a statement in support of the proposed law.

Lake George Village Mayor Bob Blais said he is not in favor of Warren County’s bill.

He does, however, support a lake-wide inspection program, one that should be implemented by the Lake George Park Commission.

“The responsibility for inspecting septic systems properly belongs to the Lake George Park Commission. Its jurisdiction encompasses the entire lake and crosses town and county boundaries, extending into Essex and Washington Counties. The watershed includes eight towns and one village within three counties, so it is critical that a septic inspection program be implemented lake-wide, and by a state agency,” he said.

Blais said he would go so far as to recommend that on-site septic systems undergo regular inspections, even if no transfer of property is contemplated.

“Now that the Lake George Park Commission has adopted its new stormwater regulations, I believe it should take on an on-site wastewater treatment system inspection initiative. I think that would be a great idea,” he said.

Blais has signed onto an effort by the Assembly Point Water Quality Coalition, launched in the wake of November’s discovery of Harmful Algal Blooms, calling upon the Lake George Park Commission to implement the program immediately.

Noting that the Lake George Association’s Watershed Data Atlas has identified the locations of nearly 6,000 on-site wastewater systems on Lake George, the Coalition stated, “the potential impact of failing systems and our drinking water is enormous.”

As further evidence of the need for an inspection program, the Coalition stated: that 80% of the Queensbury septic systems inspected during the past twelve months were found to be in need of repair; and that two-thirds of residential systems in Lake George’s south basin were found by Waterkeeper Chris Navitsky to have exceeded their life expectancy, were improperly designed or have not been properly maintained.

Compared with the cost of remediating a polluted Lake George, “a proactive approach would be cost-effective,” the group stated.

“Drinking water, health, tourism, recreation and property values are just some of the assets that would be negatively impacted by declining water quality,” the Coalition stated.

According to Eric Siy, the executive director of The Fund for Lake George, the Lake George Park Commission is authorized by the New York State legislature to implement such a program.

In fact, according to Siy, the Commission attempted to execute that mandate in 1994, but its program was disqualified by the courts on technical grounds.

A 2018 plan to prevent Harmful Algal Blooms from developing in Lake George, drafted by the state’s own Environmental Conservation Department and Lake George Park Commission, as well as The Fund, the Lake George Association and the Darrin Fresh Water Institute, recommended that a watershed-wide inspection program for near-shore systems be adopted before 2021.

The Adirondack Council said the Warren County bill that it supports is “a strong step in the right direction” toward a lake-wide inspection program.

“In time, we need to establish a program to inspect all septic systems in the Lake George watershed, whether they are being transferred in ownership or continuing to be used by the current owners,” said the Council’s David Miller. “Only then can we pinpoint all the problem areas, establish mitigation efforts and attract funding to assist in the elimination of these sources of pollution to the Lake. But this is a strong step in the right direction.”

Later this spring, the Adirondack Council will publish a report on septic system pollution in the Adirondack Park, with recommendations for mitigating their impacts on water quality.