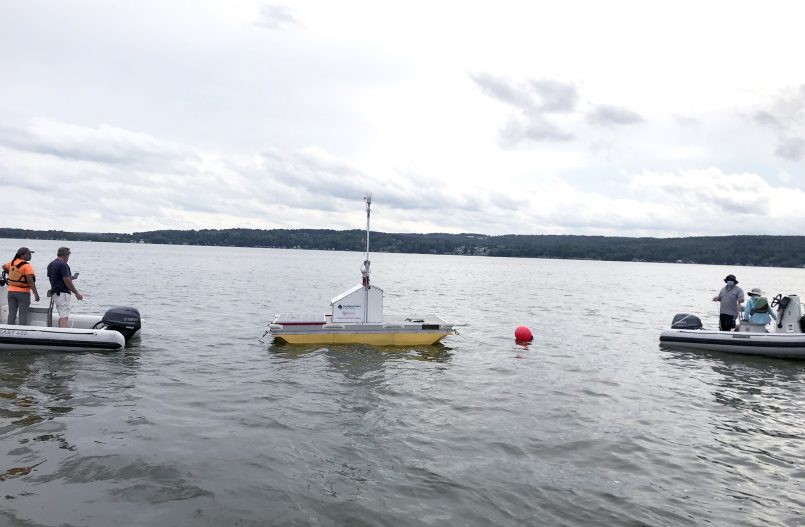 Thanks in large part to the Jefferson Project, whose mixture of science, technology and environmental advocacy has made Lake George “the world’s smartest lake,” Lake George is also known as “a hope spot,” a model for other fresh water bodies.

“Sixteen months ago, a group of us, county officials and local leaders included, went to Lake George to see firsthand the impact that the Jefferson Project has had on that lake. It soon became evident to us why it’s  called ‘the smartest lake in the world,’”  said Michael E. Hill, President of Chautauqua Institution.

“So many of the issues that our colleagues on Lake George have tackled,  and are well on their way to solving,  are issues  here at Chautauqua Lake,” he said.

Foremost among those issues is Harmful Algal Blooms.

Across New York State, Harmful Algal Blooms have led to at least sixteen documented illnesses and the closure of more than 100 beaches, just within the past few years.

Lake George is unique among the twelve lakes because  Harmful Algae Blooms have yet to surface here, said Eric Siy, executive director of The Fund for Lake George.

“Lake George is viewed by New York State as the example that other water bodies should emulate. That’s cause for celebration, but also cause for concern,  because Harmful Algal Blooms could erupt  at any time, anywhere, ” said Siy.

Lake George is attracting the interest of lakes around the state that have seen Harmful Algal Blooms develop, Chautaqua Lake and Skaneateles Lakeespecially, said Siy.

According to Eric Siy, Skaneateles Lake,  the central New York State lake that’s whic a source of drinking water for 200,000 people, experienced its first outbreak of HABs in the summer of 2017.

In 2018, one of the Jefferson Project’s sensor platforms was transferred to Skaneateles Lake to monitor weather and water, collect data and feed it to advanced computers for analysis and modeling.

It was the first time since the custom-built sensors were launched on Lake George that some were placed in another water body to perform similar functions.

“We demonstrated to ourselves and to the folks on Skaneateles Lake that our technology could provide insights into what was causing their HABs,” said Dr. John E. Kelly, IBM’s top technology executive and a cofounder of the Jefferson project. “We were able to measure and build computer models that show exactly what’s happening.”

Last week, the Jefferson Project’s partners – The Fund for Lake George, RPI and IBM – held a remote press conference with leaders on Chautauqua Lake and announced that a Jefferson Project  team will travel to that lake in late August to help groups there gain insights into the possible causes of HABs.

“This is a true game changer in terms of a comprehensive scientific approach to understanding the causes of HABs and to mitigating their impacts,” said Vince Horrigan, Executive Director of the Chautauqua Lake and Watershed Management Alliance

“Bringing the best of our technology, a constellation of leading-edge  elements, to Chautauqua Lake will help us better characterize that lake, how the water moves within the lake and how the lake functions, leading to a better understanding of the conditions that produce HABs,” said Dr. Harry Kolar, Associate Director of The Jefferson Project and IBM Fellow.

“By better understanding the drivers of HABs, decision makers will become better informed about sustainable lake protection,” said Dr. Rick Relyea, Director of The Jefferson Project and Director of the Darrin Fresh Water Institute at Rensselaer.

Bringing it All Back Home

“Nothing is more complex than Harmful Algal Blooms,” said Rick Relya.“And after  coming to understand how they develop in lakes such as Skaneateles and Chautauqua, we are able to bring that knowledge to other lakes, to make certain, to the best of our ability, that they never happen elsewhere, especially Lake George.”

Dr, John Kelly, discussing the impending loan of Jefferson Project technology to Chautauqua Lake during the annual meeting of The Fund for Lake George August 15, made a similar point.