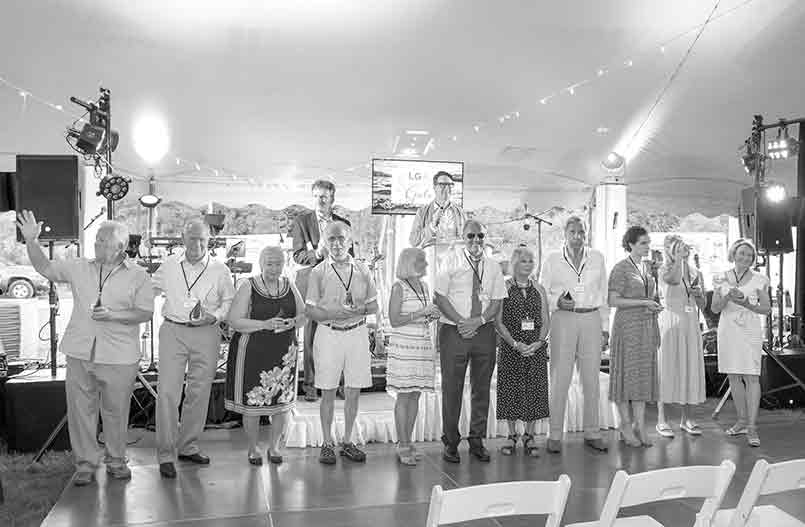 The Lake George Association held its first summer gala since merging with The Fund for Lake George in 2021 on July 23. The occasion offered members and supporters of both organizations their first opportunity to gather under one tent, both literally and figuratively.

Departing from tradition, the gala was held under an open-air tent at The Festival Commons at Charles R. Wood Park in Lake George Village, rather than at a hotel, club, or event venue.

“The big tent where we celebrate tonight is symbolic of the merger of the LGA and The Fund, bringing us all together for a common good: the lasting protection of the lake that has captured our hearts and which soothes our souls,” said Peter Menzies, the LGA’s vice-chair, and, until 2021, president of the LGA’s board.

“We exceeded all expectations in attendance and contributions,” Menzies said after the event.

According to Menzies, the event raised approximately 10% of LGA’s $3 million annual program budget.

“We set a new bar for fundraising events on Lake George,” he said.

“We are all familiar with the phrase, ‘It takes a village,’” said Eric Siy, LGA’s president. “But in our case, it takes a lake to create a culture of protection that will endure down through the generations. This is our time.  Let’s seize the moment. Let’s do what we need to do. Our kids, our grandkids, are counting on us to make that happen.”

Siy’s exhortations appears to have been successful. A live auction generated hundreds of thousands of dollars in revenues.

Among the items up for bid was a rare 1929 Chris-Craft Cadet, donated by LGA chairman Jeff Killeen, who was unable to attend the event.

Appropriately enough, pioneering Lake George conservationist John Apperson owned the same Chris Craft model, which he named “Article XIV Section One,” a reference to the clause in the New York State constitution that prohibits the destruction of the Adirondack Forest Preserve and mandates that those lands remain “forever wild.”

Rather than a sit-down dinner, the 2022 gala featured food stations and tastings from farmacy of downtown Glens Falls. Tables were available throughout the tent. Entertainment was provided by Soul Session, featuring Garland Nelson.

“We reimagined the LGA Summer Gala to accommodate more people and to have an even-more dynamic and festive atmosphere,” said Gala Chairman Jim Casaccio.

Speaking after the gala, Menzies said, “It was a fun event. It did a great thing for the organization. It was like the LGA party of the past, which has been held every summer since 2010 with the exception of the two COVID years, but The Fund’s crowd came out as well. It just worked. I was thrilled.”

Menzies said he expected the LGA Summer Gala would continue to be an annual event.