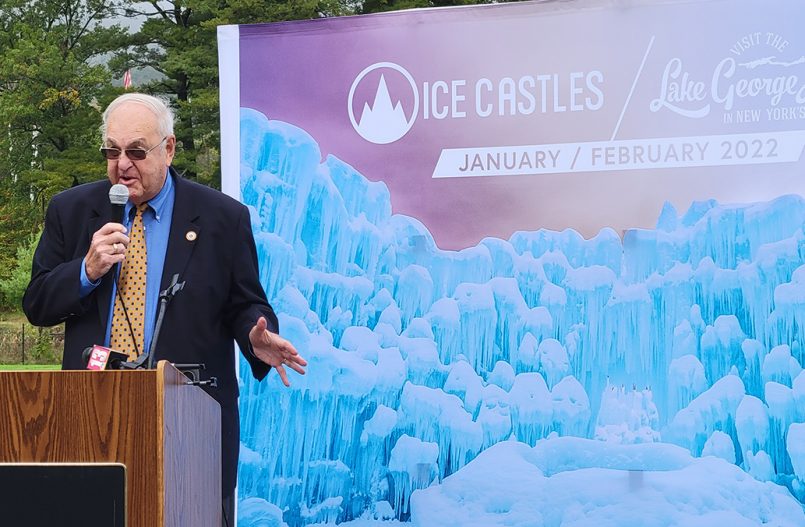 Work is already under way on a game-changing winter attraction that’s expected to make Lake George a bona fide year-round destination, while dazzling visitors with its amazing display of creativity and imagination.

Local officials welcomed Ice Castles to the region during a press conference at Festival Commons in Lake George, where the family-oriented feature will welcome guests for two months, beginning in early January

“You see a beautiful, kind of glacial natural look during the day,” said Kyle Standifird, CEO of the Utah-based company. “There are crawl spaces, caverns, slides, water features, fountains and music Then in the evening when the lights come on, that’s a whole different experience. It’s fantastic. It really is a place where the imagination can go wild. We strive to bring magic to all of our guests. That’s our stated goal.”

Ice Castles is a also photographer’s dream come true as its LED lights change color after dark. There’s even any icy Throne Room for guests to have their pictures taken.

More than 4 million people have visited Ice Castles at sites across the U.S. and in Canada since its inception in 2011. Founder Brent Christensen crafted his first icy creation in his home’s front yard, for his children, after moving from sunny California to snowy Utah.

His ice cave was a hit with kids from all over the neighborhood and eventually across town as they bundled up and headed outside to play at the wintry wonderland, which they nicknamed “ice castle.” That original mission of creating happiness, laughter and unforgettable winter memories hasn’t changed.

Mayor Bob Blais said the economic impact for Lake George could be enormous. “We researched it very carefully,” he said. “I talked to the mayors and supervisors of three communities where they’ve’ been and still are. It fills every hotel room that’s available.”

He’s calling on all local merchants to keep their doors open this winter. “All the businesses that have been open all these years, that have struggled through the winter and supported the Winter Carnival, I say thanks to them, now you’re going to be rewarded,” Blais said. “To the ones that don’t stay open and take advantage of it, I say, you don’t know what you’re going to be missing. This is big.”

Blais said he never dreamed when Festival Commons first opened five years ago that it would host a major winter attraction like this one. Thanks to Ice Castles, the venue is booked solid with events from January through October 2022, he said.

The frosty attraction will be roughly an acre in size, with ice walls from 12 to 25 feet high. Ice Castles staff arrived during October to build a temporary workshop and start running electrical and water lines.

Plans call for hiring up to 60 local residents to help construct and operate the attraction. People may apply for jobs online at www.icecastles.com.

“Hopefully around Thanksgiving time the weather cooperates and is cold enough where we can make ice,” Standifird said. “It’s an intense four- or five-week period of growing ice, literally growing thousands of icicles each day, placing them and spraying water on top of them. Then Mother Nature takes its course. It’s really fascinating to see how Mother Nature makes it happen assuming the cold weather is there.”

“We hope to open as close to New Year’s as we can, weather permitting, and then stay open through February and into March,” he said.

Plans call for welcoming guests five or six days per week from 4-10 p.m. weekdays and noon to 10 p.m. weekends.

Ice Castles is expected to be a major draw during this year’s 60th annual Lake George Winter Carnival, held each weekend during February and it will complement similar themed attractions such as ice bars hosted by hotels such as Fort William Henry and The Sagamore.

“It’s hard for me to contain my excitement as we add Ice Castles to our wonderful winter offerings such as snowmobiling, downhill skiing and snowshoeing,” said Joanne Conley, Warren County tourism director. “We’ve been working on this with local chambers, communities and the county for the last three years and it’s finally come to fruition.”

“We’re thrilled to have Ice Castles choose Lake George to expand their brand,” said Gina Mintzer, Lake George Regional Chamber of Commerce executive director. “We know it will complement current activities around the region and greatly enhance the winter experience for visitors.”

Standifird said the great deal of cooperation he witnessed between public and private officials was a deciding factor in bringing Ice Castles to Lake George, one of seven places it will be set up this winter. It’s also in New Hampshire, Wisconsin, Minnesota, Utah, Colorado and one site in Canada.

Warren County Board of Supervisors has awarded Ice Castles $50,000 to market the attraction beyond the Lake George region. Guests are anticipated from throughout the Capital District and Mid-Atlantic states.

The company is expected to pay the Village of Lake George $25,000 for the large volumes of water needed to create the display, making it the water district’s biggest customer. But it’s an environmentally friendly attraction as clean melting ice will eventually run into the lake.

“We started this process a few years ago,” Standifird said. “In our review of everything, the more we got to know the community here and saw the amazing collaboration between public and private leaders doing what’s best for the community, we got energized by that and said we want to be in Lake George and be part of this. We’ve got a great winter ahead of us and we’re very excited.”

“Our intent in entering any market is to be there longer term, absolutely,” Standifird said.

But this is somewhat weather dependent as a mild, rainy winter could prompt a change in plans.

“They need real cold weather to be successful,” Blais said. “So we just have to pray for the weatherman to treat us right, that’s all.”