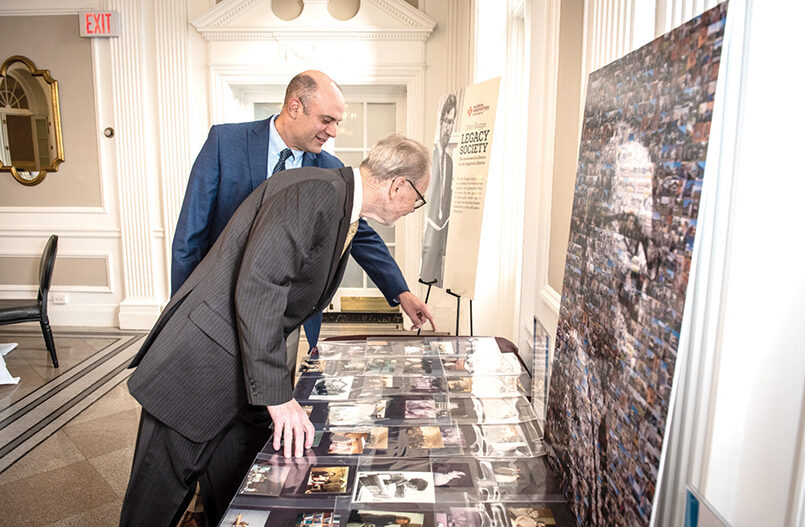 The solution to the crisis of affordable housing in the Adirondacks may lie, at least in part, with our health care providers.

The Hudson Headwaters Health Network has announced the launch of an ambitious campaign to mitigate social determinants of poor health, such as the lack of reliable transportation, balanced diets and housing.

The initiative is to be known as The John Rugge Center for Community Impact.

“The true mission of healthcare is now before us,” said Jim Himoff, president of the Hudson Headwaters Foundation. “It is to interact with and improve the environment where our residents live, work, play, worship, age and ultimately pass away.”

“Hudson Headwaters now has an opportunity to make a difference in that larger sphere,” said Dr. Rugge, Hudson Headwaters’ founding physician, who retired in 2020 after a forty-year career in the Adirondacks. “We can’t do it alone. We need partners who share our concerns.”

Rugge and Himoff were among the speakers at a benefit for the Hudson Headwaters Foundation held October 9 at the Queensbury Hotel in Glens Falls, where the network’s leaders announced they would establish the community impacts center in 2023.

“Naming the center in honor of Dr. John Rugge is, of course, a tribute to the founder of the Hudson Headwaters Health Network, but it also acknowledges that a commitment to healthy communities is integral to Hudson Headwaters,” said Jessica Rubin, a network Vice President.

While Hudson Headwaters’ turn toward the thicket of social ills may appear unexpected, it is not unprecedented, said Rubin.

“The first community health centers that opened in Mississippi and Boston in the 1960s provided not only health care but food, education and social services; they cared for the whole individual,” said Rubin. “The Rugge Center will put this approach front and center.”

80% of the causes of ill-health can be attributed to behavior, to socio-economic status, to the physical environment or to some combination of those factors, Rubin said.

“Our patients face many barriers to good health and many of those lie outside the walls of our health centers,” she said.

According to Dr. Tucker Slingerland, Hudson Headwaters’ CEO, providers as well as patients come to Hudson Headwaters precisely because the network understands, implicitly, that the practice of medicine is not limited to the exam room, the writing of prescriptions or the management of a patient’s chronic conditions.

“Well-being doesn’t happen in the exam room alone,” said Slingerland. “That’s only part of the picture.”

According to Tucker Slingerland, “Housing insecurity is among the links between environment and health.  And by addressing the lack of affordable housing, you can begin to address a number of other issues, like declining school populations.”

“There are a lot of needs out there,” said John Rugge, but added that affordable housing is among the things that would make the region more attractive and hospitable to young people, many of whom are leaving for jobs in other places.

Contributing to the growth of accessible and affordable housing is just one example of the role the new Rugge Center can play in the wider community, said Tucker Slingerland.

But, he added, “it’s a complex process; we would need to find affordable land, choose a builder and designer, navigate the regulatory environment and then cover our costs, because this would not be a for-profit initiative.”

Slingerland, a family physician who succeeded Dr. Rugge as Hudson Headwaters’ CEO in 2017 after serving as the Network’s Deputy CEO and VP for strategy, said the relationship between his patients’ environments and their health, while sometimes oblique, is a clear one.

“As we come to know our patients, we come to appreciate the stressors that translate into health issues, and if we truly wish to impact someone’s health for the better, we have to get to the root of those stressors,” he said.

Beyond the Upstream Fund

According to Slingerland, The John Rugge Center for Community Impact was anticipated by The Upstream Fund, which the Hudson Headwaters Health Foundation created in 2020 to invest in community-based projects addressing socio-economic issues affecting health.

A collaboration with the Adirondack Foundation, a Lake Placid-Based, Park-wide community trust, “The Upstream Fund demonstrated to us the impact we can have by partnering with and funding community organizations,” said Dr. Slingerland.

According to Jessica Rubin, The John R. Rugge Center will partner with Adirondack Foundation, as well as with other organizations such as the Adirondack Health Institute, to expand the scale, scope and power of the Upstream Fund’s community-oriented investments.

“To bring population-level change to our area, it will require more than grants,” said Rubin. “It will require innovation and partnership. “

“Many organizations and non-profits are doing a lot of work already,” Rubin continued. “The Rugge Center, among the many other things, will co-ordinate with other organizations and will leverage the work that is being done to make the greatest possible difference to our region.”

According to Jessica Rubin, the Rugge Center will begin its work in 2023 as a special division within the Hudson Headwaters Health Network rather than as a separate, unique entity.

“The first year will focus on planning, which will help us prioritize our goals. We expect that our first partnerships and grants will be announced in late 2024,” said Rubin.

Dr. Rugge said Year One will not only be a planning phase but a convening phase – “a way of bringing people with different interests, perspectives and experience together in new ways. By having those conversations, we will develop a shared understanding of the region’s priorities.”

Rugge will have no managerial role in the new community impacts center but as a member of the Hudson Headwaters Foundation board, “I will be an interested participant,” he said.