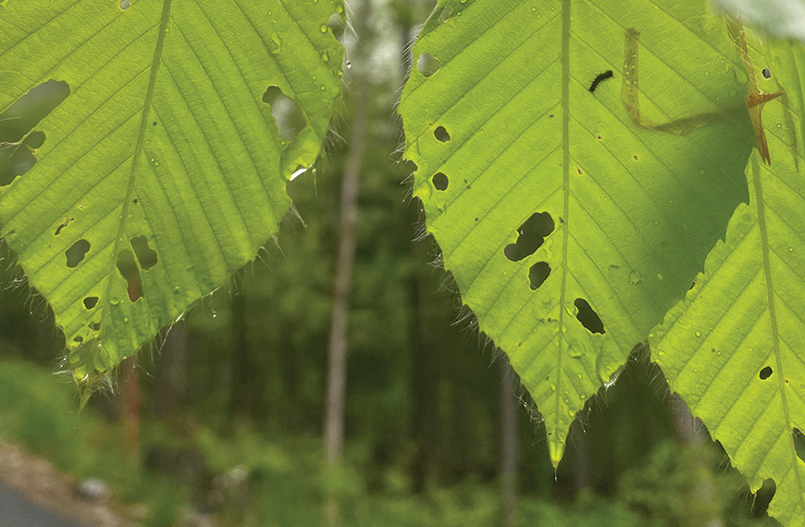 Rattlesnakes, it used to be said, do not advance beyond the oaks. Neither, apparently, does Lymantria dispar – commonly known as the gypsy or spongy moth.

Since the creature feeds primarily on oaks, maples and other hardwoods, species disproportionately represented in the coarse, rocky soils above Lake George, we can expect to see a second infestation and defolitation this spring, the experts say.

“They will go where the food is,” said Jim Lieberum, Manager of the Warren County Soil and Water Conservation District.

Infestations of gypsy moth caterpillars generally persist for two years before the population succumbs to disease or natural predators.

Last year’s eruption on Lake George was the first in a generation, said Rob Cole of the New York State Department of Environmental Conservation’s Office of Forest Health.

If the cycle is disrupted, it will be because “we do have a lot of things that control the population,” said Cole, referring specifically to the virus NPV, a fungus exacerbated by wet weather and a type of parasitoid hosted by the gypsy moth.

“For the virus to be an effective agent of mortality, the population has to expand to the point where it’s stressed; if the population is dispersed and not congregating in clusters, the virus won’t find the opportunities to spread,” said Cole.

If Lake George has a wet spring or early summer, the fungus could also prove to be an efficient killer.

Warren County has no plans to spray herbicides to kill the gypsy moths this year, though some homeowners in Bolton and Hague have contracted with state-approved applicators to treat relatively small areas.

Homeowners in Hague are among them, said Steve Ramant, the town’s deputy supervisor.

If homeowners see the bugs on their properties at this time of year, they can scrape them from the trees and drop them into a container of detergent, preventing the eggs from hatching, according to the New York State Department of Environmental Conservation.

One inventive Diamond Point couple removed the caterpillars from their trees with a portable, battery-operated “Dust Buster,”

For more information about how best to manage a gypsy moth infestation of your property, visit the New York State Department of Environmental Conservation’s website.