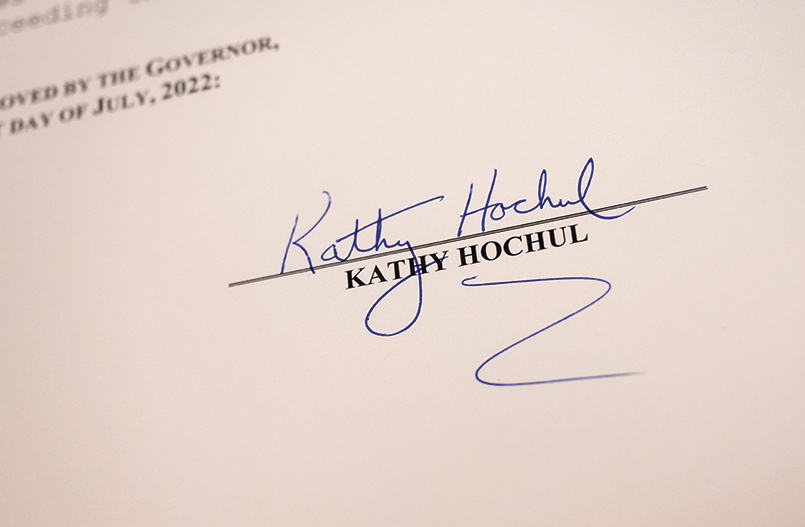 The Adirondack Park is among the “sensitive locations” from which all firearms would be banned under legislation signed into law by Governor Kathy Hochul July 1, claims State Senator Dan Stec.

“The new law changes nothing for lawful gun owners on Forest Preserve and privately-owned lands within the Blue Line of the Adirondacks. These areas are not considered ‘sensitive locations’ under the law,” Urso stated.

The law, which goes into effect September 1, strengthens the state’s gun laws and bolsters restrictions on concealed weapons.

In response, Stec stated in a press release, “the Governor and legislative leaders criminalized all guns from being carried on park property.

“In doing so, the approximately 130,000 people living on the 6 million acres that comprise the Adirondack Park lands are at risk for felony charges for merely owning a shotgun or rifle.

“This legislation turns law-abiding gun owners in the Adirondack Park into felons.”

According to Jim Urso, the new law preserves the status quo in the Adirondack Park.

“The Forest Preserve… is distinguished both in statute and the state constitution from all other public parks in New York State. The Governor’s Office is directing State Police and the Department of Environmental Conservation to issue guidance to law enforcement personnel that reflects the adequate reading of the state constitution and current law,” said Urso.

Stec’s office dismissed Urso’s statement as an attempt to “walk back (the administration’s) blunder on what its new law means in the Adirondack Park.”

According to Stec, “The law reads clearly that it will be a felony to possess a firearm, rifle or shotgun in sensitive areas, including parks.”

US Representative Elise Stefanik echoed Stec’s charges, stating in a press release, “Kathy Hochul and her radical Far-Left Democrat allies in Albany are shredding the Constitution as their most recent gun ban bill immediately classifies the tens of thousands of law-abiding gun owners in the Adirondack Park as felons.”

Stefanik continued, “This unconstitutional legislation states that a person is guilty of criminal possession of a firearm… when such person possesses a firearm… in or upon a sensitive location. The unconstitutional bill goes on to define a sensitive location as a public park. This is a direct attack on the law-abiding and patriotic citizens of the North Country and Adirondack Park.”

Stec said Hochul administration officials, including those within the DEC “confirmed they weren’t clear on what this meant in the Adirondack Park and they expressed concern and a desire to address this vagueness.”

If disagreement exists within the Hochul administration about the meaning of the new law, the Governor should “amend the poorly-written legislation so law-abiding Adirondackers aren’t made to be felons,” Stec said.

Speaking in the Senate Chamber during the debate on the bill, Stec said, “What is the Supreme court going to say? The Supreme court is going to look at this legislation and it’s going to say, ‘New York is trying to do an end run around the Court. It doesn’t like the outcome of a six-to-three ruling.’ I hope the Supreme Court is paying attention. I hope it steps in immediately and puts an end to this nonsense because all New York State is doing is making New Yorkers less safe and stripping people of their God-given right to defend themselves in public.”