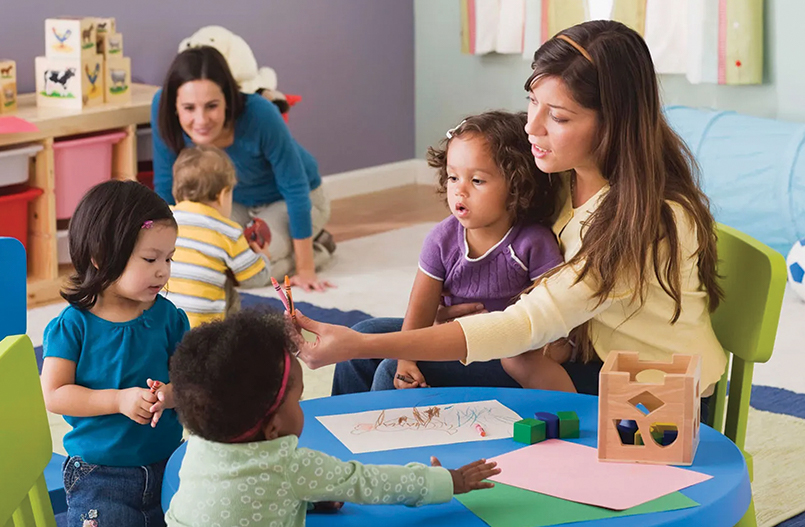 Warren County has been awarded a federal grant to encourage the development of home-based day care centers.
By Anthony F. Hall

Access to child day care services in Warren County has declined by 40% since 2019, largely because of the pandemic, according to Lynn Sickles, Executive Director of Southern Adirondack Child Care Network.

But thanks to an infusion of federal funds, the number of home-based child-care businesses is expected to grow for the first time in years.

With more home-based child care providers operating in Warren County, more parents will return to the workforce and the regional economy will grow as a consequence, officials say.

“Having enough child care providers is critical not only to the working families of Warren County, but to the businesses who need a reliable workforce. These things are  interconnected. Child care is crucial to our economy,”  said Ochsendorf. “

“The funding will be used to open more childcare provider businesses,” stated US Senator Chuck Schumer, who said the grant was included in the 2022 omnibus spending package. “It covers the training and state licensing, as well as the start-up costs for the childcare business.”

The federal  grant will be supplemented by  $112,500 in American Rescue Plan Act (ARPA) funds, awarded by the Warren County Board of Supervisors  to Southern Adirondack Child Care Network.

The organization will use the funds to open 15 new home-based child care businesses,  said the Network’s Lynn Sickles.

Home-based child care facilities are less expensive to open and operate than large centers and are appropriate for rural areas, said Ochsendorf.

According to Ochsendord, her agency’s $205,000 federal grant will be shared with Saratoga County, enabling ten new businesses to open in each county.

Ochsendorf said the Warren County Employment  & Training  Administration will also work with the private sector to raise funds for items ineligible  for federal funding, such as the conversion of  residential soaces into day care facilities or children’s meals.

“To recruit more providers is one thing; to sustain them is another,” said Ochsendorf. “The providers have costs that cannot be passed onto the working families. This new fund, which we will call the Warren County Child Care Sustainability Fund, will sustain child care in Warren County long after this federal grant has been expended.”

Ochsendorf said she hoped to raise $25,000 per year from local businesses, which are expected to benefit from the restoration of reliable child care services.

Sickles said the child care system in Warren County “is broken and was in decline even before the pandemic, which just exacerbated conditions. It will not be rebuilt over-night.”

“But we are just at the beginning,” Strough added.

Eighty percent of the communities across a five county region that includes Warren County are child care deserts, according to a new study, “The Wellbeing of Infants and Toddlers in the Adirondacks,” published by The Adirondack Birth to Three Alliance and the Adirondack Foundation.

The study also found that less than 43 percent of children under the age of five are enrolled in regulated day care programs.

The Adirondack Birth to Three Alliance,  which was created by the Adirondack Foundation in 2015, is a coalition of agency representatives, educators and healthcare professionals that advocates for policies to expand access to high-quality, affordable child care.

The Alliance contends that  the first 1,000 days of a child’s life are the most influential in his development.

Ryan said, “By investing in the early education sector, healthcare systems and other provders of services to children and their families, we will ensure that they thrive socially and economically.”

Those investments include the Adirondack Foundation’s support for child care providers, delivered through its Small Grants for Small Children Fund.

That program offers support to the  families and caregivers of young children and includes instruction in basic parenting skills and healthy lifestyle principles. It is available at no cost to parents and caregivers in Warren and Essex Counties.

The Hudson Headwaters Health Foundation created the Upstream Fund in 2020 to work with the Adirondack Foundation and support community-based projects that address socio-economic issues such as food, housing and transportation that may have long-term effects on the health of local residents.