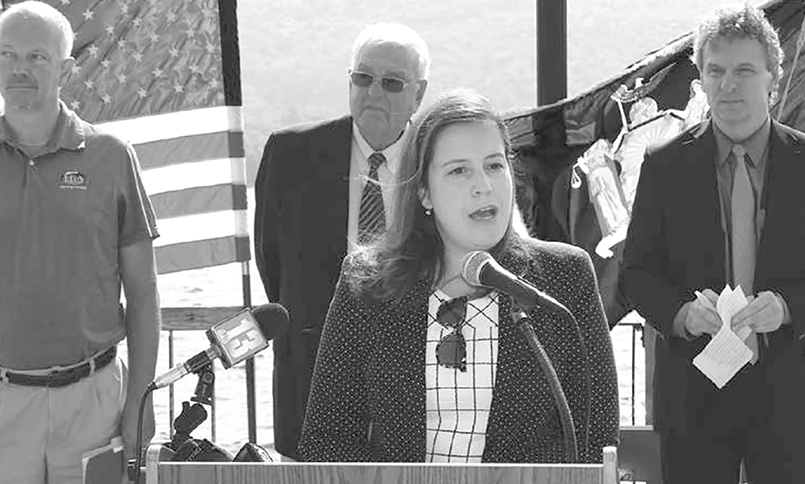 In 2019, U.S. Rep. Elise Stefanik came to Lake George Village to announce that a $500,000 federal grant had been awarded to help fund the construction of the new wastewater treatment plant. Walt Lender, Mayor Bob Blais and Eric Siy appear behind her in this 2019 Mirror file photo by Thom Randall.
By Anthony F. Hall

Ceremonies are scheduled to start at 11 am, to be followed by guided public tours of the plant. Tours will also be offered on Saturday, August 27 at 10 am.

Ordered by the DEC to improve or replace its New Deal-era wastewater treatment system in 2019, the costs of the plant were defrayed by a $9.4 million state grant announced in January, 2020.

Blais said neither Governor Kathy Hochul nor US Senator Chuck Schumer responded to invitations to attend the event.

Both Schumer and Stefanik took credit for securing a $500,000 grant for the wastewater treatment plant

The grant is the first awarded by the Northern Border Regional Commission (NRBC) to Warren County, which only recently became eligible for funding from that particular source.

The Commission was established in 2008 as a Federal-State partnership to direct funds to local economic and community development projects in the rural and distressed parts of the northeast.

Warren County’s Board of Supervisors has also committed funds, agreeing to contribute $75,000 per year over the next ten years to help service the debt incurred by the Village to construct the plant.

Board chair Kevin Geraghty, acting Administrator Craig Leggett and Lake George Supervisor Dennis Dickinson will be among the speakers.

The Town of Lake George’s Caldwell Sewer District also utilizes the plant and contributes almost half of the debt and annual maintenance.

Taylor Syvertsen, the ninth-grade student at Lake George Jr.-Sr. High School who won the poetry competition to help celebrate “the Queen of American Lakes,” will read her poem at the plant’s dedication.

Mayor Blais said the new wastewater treatment plant is the only one of its kind to be built in New York State within the past year.

According to Waterkeeper Chris Navitsky, who conducted a 17-month long study of the original plant’s impacts on water quality, that facility was the primary source of elevated levels of nitrogen in the lake’s south basin and the single, largest influence on the water quality in the West Brook watershed.

Excessive levels of nitrates, Navitsky said, stimulate the growth of weeds and algae and can endanger fish life, the quality of drinking water, recreation and even human health.

“Replacing this plant was the missing piece in the giant puzzle of lasting lake protection,” said Eric Siy, president of the Lake George Association.  “The old plant was the single largest source of a pollutant increasingly connected to the development of toxic algal blooms.”

In 2015, Lake George Village adopted a one-year moratorium on new construction to reduce pressure on the wastewater treatment plant.

That was done at the urging of Waterkeeper Chris Navitsky, who proposed similar measures for the Caldwell Sewer District a year later.

With the completion of the new plant, Navitsky said March 1, “the economy can expand.”

“The old plant was holding growth back, because it couldn’t manage it,” he said.

“This is cause for great celebration,” said Eric Siy.