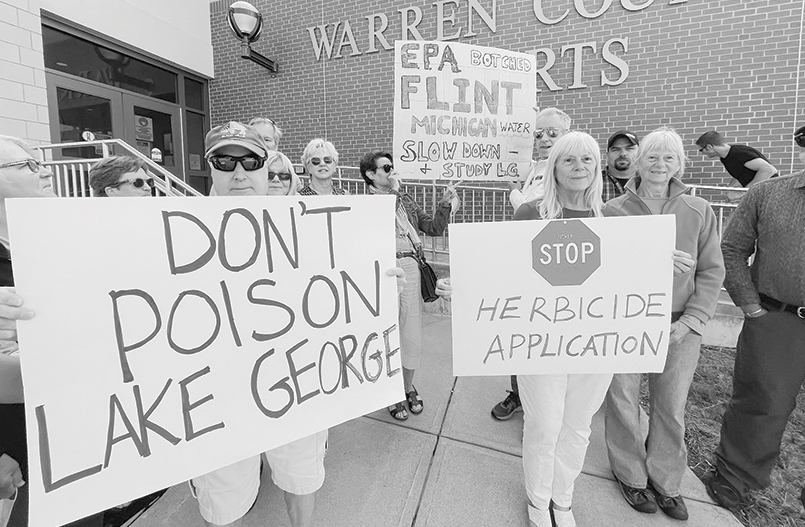 Opponents of the Lake George Park Commission’s plan to treat milfoil beds with the herbicide ProcellaCOR gathered outside the Warren County Court House on June 8.
By Anthony F. Hall

New York Supreme Court Justice Robert J. Muller has enjoined the Lake George Park Commission from treating Eurasian milfoil with chemicals within the next two weeks as it originally planned, effectually preventing the agency from using the aquatic herbicide ProcellaCOR in Lake George this year.

Muller granted the motion for a preliminary injunction at the request of the Lake George Association in Warren County Court on June 13.

“We are very pleased with the Court’s decision, as it will enable us to do the right thing for Lake George,” said Jeff Killeen, Board Chair of the Lake George Association. “With this decision, the many still unanswered questions and risks to long term Lake George water quality can be addressed before any irreversible consequences occur.”

The agency had selected two bays on northern Lake George for chemical treatment – one in Glenburnie, the other in Huletts Landing – as a pilot project.

“We respect Justice Muller’s decision,” said Dave Wick. “Through an abundance of caution, he concluded that more information was necessary before treatments could begin. We look forward to presenting that information.”

The LGA alleges that the Adirondack Park Agency failed to comply with several of its own procedural requirements when it approved the use of an aquatic herbicide for Lake George at its April 14 meeting and argues that the permit should be annulled.

The preliminary injunction was granted “pending the conclusion of (that) proceeding,” Muller wrote in his lengthy decision.

The pause allows Muller to thoroughly consider the organization’s suit against the Adirondack Park Agency and the regulatory procedures it followed before issuing the herbicide permit.

“The Court can find no discernible reason why the petitioners (the LGA, Waterkeeper Chris Navitsky, the Town of Hague and Huletts Landing resident Helena G. Rice) should not have their day in court,” Muller wrote.

According to the LGA, the APA’s approval of the permit ought to be deemed “procedurally flawed and arbitrary and capricious” for at least eight reasons. Muller ruled that of those eight reasons, at least five stood a chance of being found to have been based in fact over the course of a judicial review, a customary reason for granting a preliminary injunction.

“The importance of this case to the residents and profound numbers of visitors who enjoy the waters of Lake George and its attendant economic benefits year-round – and to the flora and fauna who call these waters home – is not lost on this court,” wrote Muller. “The Court will thus address each cause of action.”

Muller appears to have accepted many of the arguments made by the LGA’s attorney, Michael Crowe, during oral arguments on June 8.

Crowe said, for instance, that the record of the APA’s April meeting was incomplete because members of the APA board seem to have been denied access to the comments of roughly one hundred members of the public, as well as those of experts such as Dr. Carol Collins and Lake George Waterkeeper Chris Navitsky, who is a party to the suit against the APA.

“If a determination by an agency is not supported by the record, that determination is necessarily arbitrary and capricious,” said Crowe.

In its suit, the LGA alleged that the APA “orchestrated a rushed process to approve the use of an herbicide in Lake George despite an outpouring of technical and scientific opposition” – another argument that Muller concluded “had a likelihood of success on the merits.”

Whether the public has had sufficient time and opportunity to weigh in on the Park Commission’s proposal to treat invasive aquatic weeds with chemicals was among the questions posed by Justice Muller himself during oral arguments.

“A lot of attention has been paid to this issue,” said Muller.

“Given the level of public interest, why were there no public hearings? Wouldn’t it have been of benefit to have the comments of the public articulated?”

Joshua Tallent, an Assistant Attorney General within the AG’s Environmental Protection Bureau charged with defending the APA, said the public was given ample opportunity to comment upon the proposal.

Tallent added that he saw no reason for holding public hearings since several New York State agencies and divisions within agencies reviewed the impacts of ProcellaCOR on drinking water and aquatic organisms before the Department of Environmental Conservation’s Bureau of Pesticide Management approved the use of the herbicide in New York in 2019.

“There were no issues or gaps in the data presented to the Adirondack Park Agency,” Tallent said.

A High Degree of Public Interest

When recommending that the permit authorizing the Lake George Park Commission to use ProcelaCOR be approved, APA staff concluded that no public hearings were necessary, or that none were required.

According to Muller, the degree of public interest in a proposed project is among the criteria used to determine if a public hearing ought to be held.

In his decision, he wrote, “There were 300 letters submitted by members of the public in opposition to the project, as well as a resolution passed by the Town oof Hague. It is evident that there exists a high degree of public interest. Indeed, while not part of the record it bears noting that the courtroom was nearly full during oral argument on June 8.”

Is Time Truly of the Essence?

Justice Muller also questioned the urgency of applying the herbicide to milfoil this year.

“Lake George has been here for 12,000 years. Milfoil has been here for 34 years. What is the urgency in applying the herbicide within the next few days rather than a year from now? Where is the harm in a pause?” Muller asked.

According to Tallent, the harm would inure to the environment, as Eurasian milfoil threatens the lake’s ecology, and to the taxpayers of New York, who have spent more than seven million dollars over the course of thirty four years attempting to manage Eurasian milfoil with such methods as benthic barriers, hand harvesting, and diver-assisted suction harvesting.

“Lake George is Not a Petri Dish”

“Lake George is not a petri dish,” Michael Crowe told Justice Robert J. Muller on June 8. “Before we dump a chemical into Lake George, where no chemical herbicide has ever been used to control Eurasian watermilfoil, a chemical that no court order can suction up if it damages the ecosystem, let’s take our time and thoroughly study this.”

The benefits to be gained by continuing to treat milfoil with time-tested methods, “without adding a toxic chemical to the lake” outweigh the risks of applying ProcellaCOR without further study, Crowe said.

Muller concluded, “While the court is not entirely convinced that the application of ProcellaCOR will result in injury to Lake George, the petitioners have succeeded in raising questions in this regard – and it is indisputable that if ProcellaCOR does result in injury, that injury will be irreparable.”

No Harm in Further Study

Crowe said the LGA has offered to study the chemical and its potential impacts on Lake George’s ecosystem without depositing it in the lake itself.

Muller asked what, if any, consequences were to be suffered if the LGA was allowed to conduct an independent study of ProcellaCOR.

Tallent said the LGA has not shown why such a study is necessary, since the chemical has already been studied by the EPA and reviewed by several New York State agencies and divisions within those agencies.

“We do not need new studies,” said Tallent. “The DEC determined that ProcellaCOR is ‘practically non-toxic,’ the safest category possible for a chemical, and concluded that its use was appropriate for Lake George.”

LGA Commits to Working with LGPC

“With Justice Muller’s decision, the LGA, the Lake George Waterkeeper and our partners in The Jefferson Project will move forward in putting all of our scientific and technological expertise to work conducting the Lake George-specific research necessary to answer the serious questions regarding the use of this herbicide in our lake,” said Jeff Killeen.

Muller’s decision also sets the stage for a new level of cooperation with the Lake George Park Commission in the control of invasive species, said Killeen.

“I want us to work together on ProcellaCOR and ‘get it right’ to determine its long-term safety and create a sustainable next-gen invasives strategy that can be a model for all of New York’s freshwaters,” said Killeen.

Killeen said “I will be reaching out to the Lake George Park Commission in a bid to work together and with New York State to develop a long-term strategy for the pre-emption and management of invasive species. We can come up with something that’s progressive and impactful with no negative consequences.”

Killeen also confirmed that the LGA will post the $100,000 bond required by Justice Muller to protect the Lake George Park Commission from any damages it may suffer by delaying treatment in the event that the LGA’s suit against the APA is found to be without merit.

A schedule to hear the suit will be set on June 29.