Canoe and Canvas: a Contemporary Interpretation of the Encampments of the American Canoe Association

August 14, 2020
Share Tweet
Canoe and Canvas: a Contemporary Interpretation of the Encampments of the American Canoe Association August 14, 2020 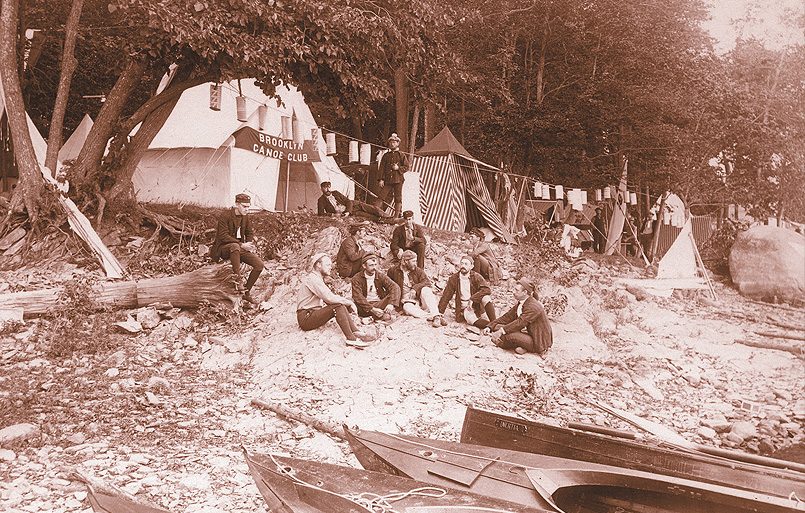 Seneca Ray Stoddard was the American Canoe Association’s official photographer. This his shor of one of the encampments on the Canoe Islands, 1881 or 82.
By Anthony F. Hall

In the spring of 1879, a summer resident of Lake George named Nathaniel Holmes Bishop, who had walked across South America when he was seventeen and whose account of a voyage in a paper canoe from Troy, New York to the Gulf of Mexico was judged by reviewers to be more riveting than any novel by Jules Verne, hand printed some invitations at his home on Crosbyside and mailed them across the country. Addressed to the “canoe cranks” (as they were not-so- affectionately known), it directed them to ship their canoes to Lake George and join him for a canoe congress.

That gathering, which took place in August, 1879, was the origin of the American Canoe Association, which continues to represent the interests of the sport to this day. (To commemorate the founding of the association, a bronze plaque in the shape of an arrowhead was created and attached to a boulder above the shore near Crosbyside, where the congress was held.  In 1963, the boulder fell into the lake, but the plaque was recovered.)

At the end of that initial congress, Bishop, Judge Nicolas Longworth of Cincinnati, and Lucien Wulsin, another canoeist from Ohio, purchased, for the sum of four hundred dollars, a group of islands near Diamond Point known locally as the three sisters or seven mile islands.  (Over the years, many local people have assumed that this Longworth was the Longworth who was Speaker of the House of Representatives and the husband of Theodore Roosevelt’s daughter, Alice. In fact, Judge Longworth, who died in 1890, was the Speaker’s father.) The new owners christened the islands the Canoe Islands, the name they still bear today.

The largest of the three islands, Lorna, became the camp of twenty or thirty canoeists when they met again on Lake George in 1880 for the first official regatta of the new American Canoe Association.

The regatta, which lasted for four days, was held on the waters off the Crosbyside Hotel.

Some thirty or forty canoeists attended; and virtually every type of modern canoe was represented; canvas, wooden, clinker-built and smooth skinned; some were decked and sailed. There were contests for racing, paddling, sailing, and dumping, the latter being a contest in which the canoeist paddles out to and around a stake boat and on the return, at a given signal, dumps his canoe, rights it, and gets back in. According to an 1880 issue of the ‘Lake George Mirror,’ one canoeist was compelled, after a long and tiresome trial, to abandon his craft and swim for shore.

The prize for winning the race that was open to canoes of all types was a canoe built by John Henry Rushton. That same year, Rushton built the first of several lightweight canoes for George Washington Sears, whose articles in “Forest Stream” published under the name of “Nessmuk” would popularize both wilderness paddling and the canoes of John Henry Rushton.

According to Rushton’s biographer, Atwood Manley, Rushton saw the Lake George congress as an opportunity to attract new business and develop new ideas. One of those ideas came from Judge Nicholas Longworth, who wanted a better sailing version of Rushton’s Rob Roy, the decked wood canoe whose design was derived from the kayak. The result was the Diana, a Princess type of sailing canoe, commonly regarded as one of Rushton’s most beautiful boats. It is now in the Adirondack Museum.

According to the Lake George Mirror, “the canoeists were so well pleased with their new quarters that they desire to return to the islands next year. Race courses are to be surveyed on the east and west sides of the islands, which will be the future school of canoe tactics.”

The American Canoe Association returned to Lake George in 1881 and 1882. Over sixty men camped on the Canoe Islands during the 1882 meet and nearly a hundred more were housed in hotels and boarding houses within range of the racing courses in front of the Crosbyside. But many of the canoeists complained about the distance between the camp and the regatta courses. A writer who attended the 1882 regatta recalled: “The paddle from camp to Crosbyside every morning and back again after the races at night was very tiring.” Moreover, Lake George itself was becoming too congested. Not only were the canoeists forced to avoid the steamboats and small launches, “the proximity to the hotels made the members and their doings a sort of show, too much like a circus – in the eyes of the people – to entirely please the calm, retiring and dignified canoeist character.”

So in 1883 the annual encampment moved to a lake in Canada. It did not return to Lake George until 1888, when it was held on Long Island, then the property D.S. Sanford. The races were sailed and paddled near the island, where the lake is broader and where the winds were said to be more reliable and steady. But the waters proved to be too rough,and the American Canoe Association left Lake George for good, with the exception of one meeting in the  1920’s at the home of John S. Apperson. By then, the popularity of the sailing canoes designed for cruising on open waters had been displaced by the lighweight paddling canoes more appropriate for canoe trips through small lakes separated by portages.

“Canoe and Canvas: Life at the Encampments of the American Canoe Association, 1880−1910” by Jessica Dunkin, an unaffiliated Canadian scholar,  offers a contemporary interpretation  of the summer encampments.

Although the late 19th century offered ever-expanding opportunities for outdoor recreation, not everyone had access to them, or was welcome when they found them.

Most of the members of the American Canoe Association and the majority of the campers at the annual encampments, for example,  were white, middle-class men, though white women were extended partial membership in 1882, and in 1883, they were permitted to camp on site.

Dunkin writes that Black, Indigenous, and working-class people, while obscured by the historical record, were indispensable to the smooth functioning of these events.

According to Dunkin, the encampments enable one to explore not only sport and leisure at the end of the 19th century, but the relationships between recreation, society and politics.

A social history of sport, “Canoe and Canvas” argues that gender, class and race shaped the social, cultural, and physical landscapes of the ACA encampments.